More TV ads are featuring Asian Americans, but are they debunking stereotypes?

SOMETHING ODD has been happening as of late. Flip on the TV and you're bound to see what you almost never saw in the past: Asian Americans in commercials-lots of them, and not just your kung-fu fighter or garden-variety geisha girl stereotypes. Could it be that today's commercial Asians are actually (gasp!) normal or even (gasp again!) American?

A few examples: Home Depot recently ran a humorous ad featuring an Asian American family where the daughter-using pitch-perfect "tweenglish" ("What's up with the cabinets?")convinces her father to vamp up the kitchen after being bribed by her mother. In another commercial, Baskin-Robbins gently pokes fun at the notion that all Asians are straight-A-wielding-freak geniuses. There's also a Shell oil commercial that features an Asian American male scientist in one of its more pervasive ad campaigns (fill up at the pump and you will see them).

But without a doubt, the undisputed piece de resistance is Careerbuilder.com's "Self-Help Yourself" commercial, a piece that never forgets that "humor as subversive" only works if the joke is funny. Really funny. Chucking the "all Asian men are stoic" stereotype into new heights of deadpan, the ad features a dayin-the life of Larry, a literal everyman who hates his job almost as much as the average viewer. Oh yeah, he also just happens to be Asian American.

Larry sees his face superimposed on people around him, who are all encouraging him to find a new job: from a blonde cop who finds saving kids from burning cars "so rewarding," to an African American woman spouting on the phone, "I always wanted to be a nurse so I finally just said to myself, 'Girlfriend, you gotta quit that dead-end hateful job and follow your heart ... so I did.'"

Sure, these commercials are usually on the screen for less than 30 seconds (blink, and you will miss them), but hey, progress is progress, right?

Randall Park thinks so. No stranger to commercials-he's acted in many, including spots for Old Navy, Verizon, 21st Century Insurance and Wells Fargo bank-he sees the trend as a small but meaningful difference.

"The subtle things are what shape perceptions, you know, the things that we don't question, that we just see, and we accept," he explains. "I feel like to see a family, like, on a 30-second commercial-an Asian family-to me, that's powerful. It's subtle."

Park argues that in a post-Obama world, regardless of why the trend is happening, perceptions are changing "in a good way."

"Maybe the intentions of the advertisers aren't as innocent and pure as we'd like to think," he says. "Maybe they are aiming for communities and trying to get money from these communities, but I think the outcome is [still] helpful."

Park, who is also a comedian, acknowledges that humor has its strong points over more militant politicking.

"Sometimes the most powerful way to kind of change things for a community is to not bash people over the head with political messages but to just keep them laughing," he says. "That's a great way to humanize you. It's almost a better way than to shove a picket sign in someone's face."

Daniel Cho-who played an English student schooled in the art of pickup by comedian Carlos Mencia in a Bud Light Super Bowl commercial-echoes that sentiment.

"I think sometimes we get a little too serious with a lot of things," Cho says. "Don't get me wrong, there are some commercials that are truly wrong. But we as a people need to chill out on a lot of things."

In fact, Cho sees the Asian American community as sometimes the "biggest haters of their own people" and urges them to break out of the model minority mold. To really shake things up, Asian Americans need to "hustle a lot more" and show more love for the arts.

"We need more comedians, musicians [and] actors to come out and represent for us," he says, citing Bobby Lee, Susie Suh and Sandra Oh as just a few examples.

For Cho, commercials help him pay the bills and "get some cheese on that hamburger." He agrees that while Asian American actors definitely have it a lot better than they did before, he remains cautiously optimistic.

"I would hope that it would help our image, and to a certain degree it may help the Asian American image, but honestly, I don't think it helps that much," he says. "I mean, how does seeing an Asian family on a Home Depot commercial make white people go, 'Gee, honey, those Asians are just like us!' I think that's kind of absurd."

So, is it too early to tell exactly what impact the sudden influx of Asians as "normal" Americans in commercials will have for now?

After all, only three years ago, MasterCard showed how "priceless" meeting the parents of your foreign Japanese fiancée could be-if you're white, male and American, that is. Even today, hot Pockets pushes its thoroughly unfunny "hot Pockets Dojo" campaign, complete with inscrutable Master ReDai (obligatory gong in tow).

And what about South Asians and Southeast Asians? Where are they?

Salesgenie.com withdrew its Super Bowl ad featuring pandas with faux Chinese accents but kept a commercial with a salesman named Ramesh, who also has a heavy accent. Vinod Gupta, the chairman and chief executive of InfoUSA, the parent of Salesgenie.com, told The New York Times that "more people seem upset about the pandas than Ramesh."

But East Asian Americans may need to be more reserved in their celebration. After all, if progress is happening, it should not come at the price of others.

Perhaps one day we will reach a point when Asian Americans (whether East, South or Southeast) on the tube will have become so common that we won't even care. That's when we can finally do what we always do when seeing a commercial-flip the channel.

Alex Jong Seok Lee has been living in Seoul for three years. He is a program officer at the Asian Regional Exchange for New Alternatives and an occasional freelance journalist. 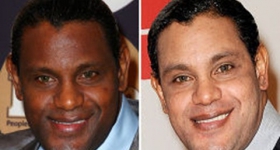