Author, activist Grace Lee Boggs tells us which books have influenced her work.

Four books have especially sustained my activism over the years: The Analects of Confucius, Hegel's Phenomenology of Mind, Wallersteln's The Modern World System and Lewis Mumford's The City in History.

When I was a child, my father used to use "Confucius said" homilies in his efforts to get us to do the right things in our relationships with one another. As I grew older, I discovered gems of wisdom in Confucius for myself. For example, Confucius helped me look in the mirror because he understood that everyone is a "work in progress."

"At 15," Confucius said, "I thought only of study; at 30, I began playing my role; at 40, I was sure of myself; at 50, I was conscious of my position in the universe; at 60, I was no longer argumentative; and now at 70, I can follow my heart's desire without violating custom."

In my first year of graduate school, I was introduced to the Phenomenology of Mind by George Wilhelm Friedrich Hegel, the German philosopher, and discovered that history is the story of the continuing struggle by human beings like myself to make the ideal real and the real ideal. Hegel, who was a young man when the French Revolution began, experienced the contradictions that emerged during the revolution and out of that experience developed the method of thinking dialectlcally. The Absolute (or what we call Freedom), Hegel said, Is not achieved "like a shot out of a pistol but through the labor, patience and suffering of the negative."

It was 1935 and I was only 20 years old, much too young to understand Hegel's full meaning. But it sounded right, and I read and reread it like music.

In 1975 when I was 60, I got a sense of the centuries of catastrophes and struggles that had gone into the decline of feudalism and the development of capitalism from The Modern World System: Capitalist Agriculture and the Origins of the European World Economy in the Sixteenth Century by Immanuel Wallerstein. I still have the review of this remarkable book, which appeared on the front page of The New York Times Book Review. I have several of Wallersteln's books in my library and often share the statement: "The world of 2050 will be what we make it," which Wallerstein makes at the end of chapter six in his little 1998 book Utopistics: Or Historical Choices of the Twenty-first Century.

In the last 25 years, as my life has centered around the movement to rebuild, redefine and respirit a devastated and de-industrialized Detroit from the ground up, I read and reread The City in History: Its Origins, Its Transformations and Its Prospects by Lewis Mumford. In this nearly 700-page classic, published In 1961, Mumford explains that whereas rural life is conservative and female, city life is dynamic and male. The city is where almost everything seems possible and where man Is made and remade. In Detroit, we are bringing the country into the city by growing our own food on vacant lots and In the process also transforming ourselves by reconnecting ourselves with Mother Earth and reuniting the best qualities of females and males.

Over the years, these - and many other books - have played an important part in sustaining my activism. I have discovered that activists who emphasize practice at the expense of ideas actually get stuck and are unable to recognize the paradigm shifts made necessary by rapidly changing reality. 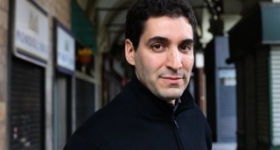