For some Asian American writers, ethnicity issues ease into the backdrop.

FIRST-TIME NOVELIST Sang Pak says much of the inspiration for his Southern Gothic-esque Wait Until Twilight came to him in his sleep.

“Sometimes you have a dream and you wake up and forget about it, but some of them just stick with you,” Pak says. “Well, I was having a lot of those.”

Pak translates this otherworldly quality into his writing. Samuel, the protagonist, is a bright 16-year-old whose obsession with a set of deformed baby triplets leads him down a perilous path. The nightmarish scenes where Samuel goes head-to-head with the triplets’ frightening brother are tempered with the daily rhythms of high school life, which Pak captures at a realistic pitch.

Though Pak sets the narrative in a locale much like the small Georgia town where he grew up, he leaves the protagonist’s appearance mostly unspecified.

“When you have a dream, it’s usually this first-person thing,” Pak says. “In the book, I never describe [Samuel’s] race or anything. That’s also the reason I used present tense — I wanted to keep these subtle surreal elements.”

The trend away from identity-based stories may be spurred by master of fine arts programs that tend to stay neutral on race in literature, says Lawrence-Minh Bui Davis, a doctoral candidate in Asian American literature at the University of Maryland and co-editor of the recently-launched Asian American Literary Review.

“The training one receives in many MFA programs doesn’t necessarily discourage identifying oneself as a writer of color, but it doesn’t necessarily encourage it either,” Davis says. “Workshops overwhelmingly focus on craft as opposed to politics or social critique.”

An illustration of the dilemma faced by writers of color, Davis says, is found in the opening story in Nam Le’s The Boat — set in an MFA program at the Iowa Writers’ Workshop — where a writer (also named Nam) refuses to write the expected cultural narrative, despite a visiting literary agent’s exhortation that “ethnic literature’s hot.”

“In Le’s story, writing ‘Asian American’ becomes at once a means to publishing success and an act of selling out,” Davis says. “[It’s] a no-win situation for the Asian American writer.”

Le’s story collection sets forth narratives about non-Asian American characters (among them, an American woman visiting Tehran, and an Australian teenager) as well as tales about the Vietnamese refugee experience. But, Davis says, although Le’s collection has received critical praise, it hasn’t achieved commensurate sales figures. Perhaps the public hasn’t lost its penchant for the traditional ethnic narrative.

Davis also believes the shift is partly a generational one. Early Asian American writers felt pressure to explain their cultures because Asians were absent from the public imagination. For example, Maxine Hong Kingston’s novel China Men (1980) details the stories of Chinese men in America from the 1840s to the Vietnam War in order to provide “a Chinese American history lesson” that textbooks weren’t providing.

But as such Asian American novels proliferated through the 1990s, such “ethnographic writing” was increasingly derided as pandering to the mainstream, Davis says. Second- and third-generation Asian Americans were no longer interested in narratives highlighting customs and food; they craved something new. But the standard immigrant stories, typically marked by family recipes and arranged marriages, met consistent success that kept fueling their publication.

For Asian American writers, Davis says, “the landscape had changed — just as many black writers, earlier in the 20th century, went from championing African American literature to wanting to be known simply as writers, not [as] black writers.”

Pak certainly faced the prototypical writer’s experience on his road to publication, enduring his share of unpublished novels and rejection letters. But unlike many other Asian American writers who preceded him, he was never told by agents or publishers that his writing wasn’t “Asian enough” to position his books as ethnic literature.

In fact, according to Jeanette Perez, Pak’s editor at HarperCollins, ethnicity had nothing to do with the decision to publish Wait Until Twilight. The novel simply had the perfect combination of literary atmosphere and commercial appeal, Perez says, as well as an engaging protagonist. “When it comes down to it, a good writer is always an actor on the page,” she says.

Are readers really ready for post-racial fiction — narratives untethered from the author’s race, populated by racially unspecified characters? HarperCollins seems to think not, if Pak’s book cover is any indication. While Pak stands by Samuel’s “everyman” identity, the market-driven cover design depicts the hero as a conspicuously white-skinned, freckle-faced boy.

“When I first saw the book cover, I was like: ‘No, please!’ ” Pak says, laughing. “But [the publisher’s] whole purpose was: What can we put on this cover to get people to open it up? And as a marketing ploy, I can appreciate that. I would definitely like something a little more understated and artistic but they just want to sell the damn thing, so I can understand that.”

The book’s cover aside, readers might infer that Samuel is white because of the unremarkable ease in which he moves through the small-town, southern-US setting — and because race is otherwise present in the story. Race is salient, for example, in descriptions of the poor residential neighborhood where the babies live, in characterizations of Samuel’s friend Melody (“the tall coffee-skinned black girl”), in the acts of a Japanese student who defends himself against a black assailant and in scenes involving a Korean American student whose Asian identity attracts threats in a bar.

But ultimately, Pak wants his Asian American characters to be three-dimensional humans rather than tokens of “the immigrant experience.” 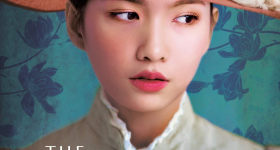