Among the dozens of dancers on stage, the three smallest ones grab the spotlight. Jeremiah Bastida — who looks miniature in his oversized white T-shirt — has been dancing with Funksters, the youth division of San Francisco Bay Area-based hip-hop dance company Funkbrella, for three years. He is 9 years old.

“The whole idea was to combine a sense of community and family with a professional dance atmosphere, to create something new that the dance community did not have,” says Gina Mariko Rosales, former Funkanometry San Francisco executive director.

Funkbrella is part of an emerging scene in the hip-hop dance world: community- and college-based dance crews composed primarily of Asian Americans. With the help of dance competition TV shows, many of which prominently feature Asian American dancers, these crews are making waves in the industry, as well as planting the steps for the next generation of hip-hop dancers.

“Having Asian faces on TV has really exploded the identity of hip-hop dance,” says Arnel Calvario, a dance crew manager and adviser. “With so many Asian American dancers on TV now, we’re at a time where the face of hip-hop dance is very diversified and inclusive.”

This is due in large part to shows like MTV’s America’s Best Dance Crew (ABDC), which brought the Asian American hip-hop community into the national spotlight. Blogs and Facebook status updates overflowed with love, particularly for Kaba Modern, which Calvario founded in 1992, and JabbaWockeeZ, the show’s first-season winner.

And the momentum grew. Jabba went on to headline its own show at the MGM Grand in Las Vegas earlier this year. Quest Crew, an all-Asian American dance troupe, won the third season of ABDC. According to Calvario, more Asian Americans are garnering positions of power within the hip-hop dance industry as well.

However, while Asian American dancers are receiving unprecedented airtime, there may be some backlash. “While we’re at the height in terms of visibility, it always presents a challenge when networks are going to be looking for something different [for ratings],” Calvario says. “We’re very lucky that we came at an opportune time, but some of the younger groups might find it more challenging to break through now.”

Asian American hip-hop dancers may have a secret weapon for continued success: a culture of discipline and respect. Ingrained interdependence and reverence for elders allows dancers to set egos aside and work cohesively. “When you put together discipline, respect and a sense of family, that’s really a foundation for a successful group,” Calvario says.

Like in any family, there is a sense of learned tradition that reveals itself in the choreography. In the ’90s, many Asian American crews finessed popular street styles like popping, locking and breaking. Then, the moves began to evolve.

“A lot of Asians are opening [hip-hop dance] to other styles and other forms,” says Anna Sarao, founder of Body Rock, a massive annual hip-hop dance competition in San Diego, CA. “The choreographers I see nowadays are blending contemporary jazz and lyrical [dance] into the movement.”

Sarao predicts that the Asian American hip-hop dance scene will eventually progress into more theatrical, musical productions, complete with story lines and elaborate sets. She cites San Diego-based crew — and 2010 Body Rock runner-up — Choreo Cookies as an innovative crew to watch out for.

Other more nontraditional dance styles are becoming integrated into hip-hop performances, and Asian American dance crews are at the forefront. Channeling ’70s New York gay club culture, Kaba Modern executed a group-synchronized “shablam” — where a person spins into a flat-backed drop with one leg extended and the other tucked — during a performance at Sockhop, Funkbrella’s annual fundraiser, in June. Voguing, wacking and other club styles are also moving from the streets onto the stage, courtesy of Asian American dancers.

“[Our influence is] at the height right now of any other time in hip-hop dance culture,” Calvario says. “In mainstream, we’re visible; in underground, some of the best people winning battles [are] Asian Americans. It’s definitely a proud time.” 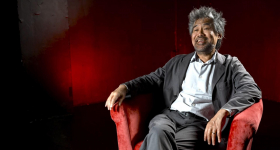 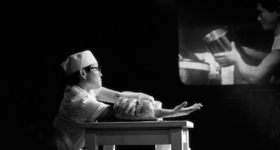 Anonymous wrote on Sun, 09/19/2010 - 11:35pm
They're so cool & SUPER NICE! :') & amazingly talented & they maintain a high standard of art in their performances ^_^ I hope I can be among them one day; even the KIDDIES are SUPER TALENTED! I love them & it makes me emotional
Angela Rylander wrote on Tue, 06/19/2012 - 2:30pm
Hi there, We thought you would be interested in posting the first tutorial of Mike Song, a dancer who has been on America's Best Dance Crew, and is well known for "Tutting". This is his first dance tutorial on his new YouTube channel MikeSongDance. Video Link: http://www.youtube.com/watch?v=dAoQZ4XG2Vs Embed code: Best, Angela