Two new novels take us on the long journey back home

Where are you from? It’s the persistent question that jangles many an Asian American nerve.

For the most part, we know what the question is really trying to ask. The roundabout inquiry into your ethnic origin, while innocuous at first glance, can be downright offensive when used to channel stereotypes. So depending upon your mood (or the cultural makeup of your inquisitor), you saucily name an American city or, in a beneficent move to quell the other person’s guesswork, a foreign country.

Still, during quieter moments of introspection and self-honesty, your mind has likely wandered toward an underlying issue at stake — how much do you know about your ancestral homeland and history? Not much, a sad number of us might say. Or at least, not enough.

Driven by such awareness, an increasing number of first-time novelists and poets are turning to their families’ ancestral homelands for inspiration. Rather than writing about themes of forced exile and displacement that characterize classic immigrant literature, such as America Is in the Heart, China Men and Dictee, this generation’s newest writers are writing about return to their families’ countries of origin.

Two such recent books are Ronica Dhar’s Bijou Roy and Deanna Fei’s A Thread of Sky. Both authors are second-generation immigrants publishing their first novels. Dhar’s parents arrived in the United States in the 1970s to escape India’s political turmoil and raised her in Michigan. Fei was raised in New York by Taiwanese parents who came to the United States in the 1970s for graduate school.

In both novels, the return to the ancestral homeland is precipitated by the father’s death. Upon return, the main characters discover family secrets that intertwine with major events in their ancestral countries’ histories. Rather than offering epiphanies or resolution, both works complicate the idea of home, belonging and connection. As both novels conclude with the main characters awaiting their next trip in airports, we are reminded of their suspended state between countries and cultures, as they process memories from their visits and altered relationships with their families.

In Dhar’s novel, the main character, Bijou, returns to India to perform the holy ritual of scattering her father’s ashes in the Ganges. During her trip, she learns of her father’s guerrilla past as a member of a communist group called the Naxalites that terrorized Indian landlords and authorities into redistributing wealth among peasants. Bijou’s discovery of her father’s betrayal of his closest comrade by abandoning the movement and fleeing abroad to escape imprisonment provokes a crisis, driving her to question herself and her knowledge of her own history.

Dhar attributes the trend of return narratives to a “craving”: “We crave knowing more because we’ve heard so much about it from our parents,” she said. “It’s almost a rite of passage that every immigrant generation goes through. … My parents raised me with a strong awareness of this other place where I belong.” For Dhar, writing her novel became an attempt to re-create her parents’ emotional attachment to India for herself.

In Fei’s novel, a mother reunites three generations of women after her husband’s death by planning a two-week packaged tour of China. As the trip progresses, all the women struggle to come to terms with the conflicts in their lives and learn to be vulnerable with each other. The granddaughters learn about their grandmother’s revolutionary past as a leader of the Nationalist movement. Although edified by their grandmother’s example, the granddaughters continue to be haunted by her ultimately failed efforts in their drive to overachieve at the expense of their well-being.

For Fei, the craving to return to her parents’ homeland was further spurred by her family’s reluctance to talk about the past and she acknowledged that doing so would be a complicated task. “For one thing, it’s a problem of translation, and I don’t mean that strictly in the linguistic sense,” Fei said. There’s so much explaining that needs to be done for someone who grew up in America that I think there’s this sense of ‘well, you wouldn’t understand anyway.’ ”

As opposed to the silent, passive nature of treating sensitive issues that is prevalent in most Asian cultures, it is a “peculiarly American impulse, this idea that talking about something somehow makes it better or helps it heal,” Fei said. “I think that that isn’t always the case especially when there’s a history of war, trauma and displacement — a lot of those subjects don’t easily lend themselves to conversations.”

The prominence of return in writings by new Asian American writers diverges from previous return narratives in that little reconciliation occurs between the ancestral homeland and American rootedness. Unlike the teary conclusion of The Joy Luck Club, for example, where the protagonist’s trip to China awakens her to her heritage and family ties, Bijou Roy and A Thread of Sky offer no pat resolution. Any romantic expectations held by the characters of reclaiming heritage, shedding negative aspects of American culture and healing family rifts end in disappointment.

Fei said she resisted writing a return-to-homeland narrative for a long time precisely to avoid such neat conclusions. “For me, if anything, that’s the beginning of a story, that’s where you start to explore all the questions that it raises, and that’s where novels come from, this idea of exploration,” she said.

It might be expected that the quest to discover home will lead to a deeper understanding of one’s identity, as it often does in biographical accounts, such as William Poy Lee’s The Eighth Promise, where the son undergoes a mystical experience upon reaching his mother’s native village in China. “Home,” however, is not what it used to be in Dhar’s or Fei’s novel. Characters wake up to their own false nostalgia as the reality of constant change infects their memories and old beliefs. They gasp at capitalistic booms in the urban centers of their ancestral homelands. They grapple with the new forms that old traditions have taken. They recoil at their treatment as complete foreigners. Emotional and psychological ties to their families’ histories persist, but even these histories are elusive, prone to concealment by elders and misinterpretation by younger generations. Because “home” itself is so unstable, “identity,” then, is no easy find. Rather than the epiphany we were all hoping for, the novels end with the characters still wrestling with the tensions unearthed by their trips.

Wen Jin, assistant professor of English and comparative literature at Columbia University, recognizes the trend of returning to ancestral homelands as a “transnational turn,” which examines the ongoing cultural, political and historical interchanges between the United States and Asia. Jin notes in an interview that the ambivalence surrounding identity, homeland and historical ties in the novels can be read as a way to explore various cross-cultural identifications and widen the reach of what can be considered “Asian American” — as well as “Asian American literature” — in a way that resists a US-centered geographical location.

Like Jin, Fei views cross-cultural allegiance as the most important concern for writers of her generation. “For previous generations, there was a need to either assimilate more as Americans and prove our sameness or there was this clinging to primarily Chinese or whatever their identity is as opposed to being American. But for my generation, we’re truly Chinese American or Asian American in a way that both of those are equally important to us.”

Dhar embraces the same plurality: “It’s a process. First, you feel like, ‘Where do I belong?’ And then, you figure it out — you can belong in many, many places.” 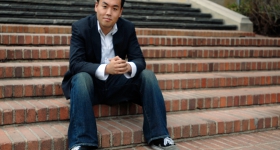