A Marine learns about tolerance in the Middle East.

Two framed pictures of my brother and me used to hang over a makeshift altar in my mom’s house. They were the stoic portraits that all Marines take during boot camp.

My picture was above the Santo Niño (the Filipino name for “Baby Jesus”), and John’s hung above the Virgin Mary.

As in many Filipino households, my mother dedicated a revered space in her house for an army of figurines that included Jesus, the Virgin Mary, the Jolly Green Buddha (usually brandishing chocolate), a bowl of coins, and the golden cat waving its arm.

One day in 2001, while I was on military leave, I suggested that she move the pictures to the living room. “Bakit? You guys look great!” she said proudly. “You are both Marines!”

“But Mom,” I said jokingly, “usually when you put pictures of guys in uniform over an altar, that means they’re dead. I still have two more weeks before I go to the Middle East!”

She screamed “Walang hiya!” (shameless), and left me alone staring at the altar. I donned a goofy smile and laughed to myself as I often did when things got too serious in my family.

It was probably a really bad joke for my mother to hear at the time. I thought, as I often did, that by making light of the situation I would relieve the sadness in my parents’ hearts. Just a few weeks after 9/11, my unit would be part of the first wave of Marines deployed to the Middle East for Operation Enduring Freedom, an operation that would ultimately take the lives of 1,227 U.S. servicemen.

That afternoon, I visited my best friend Kaysar to say goodbye before I left for base the next morning.

I’ve known Kaysar since the first grade. It’s hard to explain how we became friends because we came from totally different backgrounds. His folks were devout Muslims from Iraq and mine were dedicated Catholic Filipinos. Sometimes, differences like these are enough to halt friendships; in our case, Kaysar and I learned more about each other’s cultures than any textbook could teach us. Eventually, we were like brothers.  Now, I was off to war to potentially fight a part of his people, his roots, his history.

“Just be safe out there,” he said patting me on the back.

As we embraced in his driveway, a truck full of guys drove by and yelled, “Rag-headed faggots.” As one of the few Muslim families in the neighborhood, discrimination would soon come daily for the Ridhas.

That night I had a quiet dinner with my parents. We didn’t talk much about me leaving. We just ate kanin kamayan (with our hands) and talked about the things we would do together when I returned. Before we finished, my father told me something that would stick with me throughout my time in the Marines and beyond.

“Filipinos have a long history in wars,” he said. “Filipinos are fighters. It is in our blood.”

The next morning our unit boarded five commercial aircraft to fly halfway across the world to Shannon, Ireland — our last stop before we would reach our primary landing zone in Alexandria, Egypt. There, our commanding officer told us that someone forgot our ammunition in another plane and what we had left was very little. If we found ourselves in a hostile environment upon exiting the plane, odds were that we wouldn’t survive. The commanding officer then informed us that the chances of our aircraft being ambushed were very high. My heart dropped.

As a squad leader, I called for a meeting in the back of the plane with my 16 Marines. I informed them of the situation and got mixed responses. It was heartbreaking to see some of the 18-year-olds scared to death. But it was worse to hear the jeers of racial epithets and outright hatred towards Arabs and Muslims.

I remained silent about their hateful comments.

As we approached the landing strip, the aircraft’s lights dimmed down. Everyone was quiet. The aircraft stopped and I looked outside the window. Other than the blinking blue lights from the aircraft, there was nothing but darkness. Our commanding officer gave us a signal to open the doors. I began to breathe heavily, with adrenaline pumping through my veins.

Before I turned the handle, I remembered my father’s words. I regretted that I didn’t stand up to my Marines. I wanted to tell them that what they were saying was wrong and that, perhaps, the people they were so quick to hate could be people who were part of my family. I promised myself that if I lived through that day, I would let them know.

“On the count of three open the hatch, Swing,” my commanding officer said to me. “Three, two, one...”

I ended up keeping my promise. I was sitting in the passenger seat while Sgt. Largent was driving our Humvee through hundreds of miles of Egyptian desert. We were frustrated due to the lack of guidance in our mission and the blazing heat didn’t help quell our tempers. We stopped to rest our vehicle from overheating, pulled out two water containers and used them as seats.

“I just want to get back home to my wife and little girl,” he said. He passed me a picture of his daughter and smiled wearily. “Swing, why can’t we just bomb the shit out of these bastards so we can get this over with?”

He covered his eyes with his sunglasses and looked across the horizon. He sighed heavily.

“A lot of these bastards have wives and little girls waiting for them at home too, Largent.” I handed him his picture. “The soldiers we see ... they’re no different from us. They’re just as desperate to get back to their families as we all are.”

“I just want to see them again, that’s all. I’ll do whatever it takes to see my little girl.” A tear made a trail down his cheek through the light film of dust and sand that covered both our faces.

There would be many times when I spoke with other Marines — sometimes when we were safe and resting. Other times, when we were in the heat of battle. I wanted them to look at the Egyptian and Afghan nationals as people like ourselves, people with families and stories.

It’s hard to escape the memories that constantly play over and over like an old, dark film reel in my mind. If I’m not thinking about anything else, I can sit with my eyes closed for hours, still very awake, and watch everyone’s faces and hear everyone’s voices — many of whom are now very far away.

I’m not sure if I changed the views Sgt. Largent had about the people of the Middle East, but I’m certain I invited him to see these people from a different perspective, even just for one second. I like to think I helped them find humanity in a place and time when it was hard to come by.

Peter J. Swing is a communications consultant to the Asian American Justice Center and currently a steering committee member for the Korematsu Institute for Civil Rights and Education. He is working toward completing his first novel, Café Para Tus Labios, about the life of a coffee laborer in Costa Rica. (Author portrait by Derek Lieu)

Do you have a story to tell in 1,000 words or less? Submit a First Person. 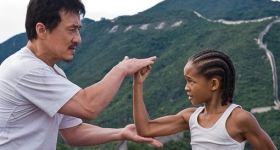 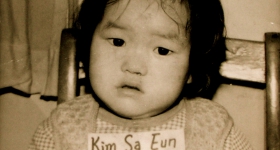