Online Exclusive: An Audio Excerpt of “Deliveries” and a Short Conversation with Author T Kira Madden

T Kira Madden is a writer and photographer in New York City whose fiction have been published in venues such as The Fiddleback, elimae,and Fourteen Hills.  Her short story “Deliveries” is featured in Hyphen Issue 26. We asked her to read an excerpt of the story for our website, and then chatted with her briefly about the haunting story, as well as her thoughts on fiction writing and Asian American literature.

This story is haunting and imaginative. Can you tell me a little bit about the genesis of this story and what it means to you?

This story killed me and loved me and ate me and spit me out and forced me to come back again. Which is to say, it was complete torture to write.

I started writing Deliveries soon after I began teaching creative writing in county jail.  In the beginning I really felt unable to process my experience there. There was this physical space of imprisonment, then the mental and spiritual imprisonment, and, for the first time in my life, I no longer understood what it meant for one to be free. My own privilege felt uncomfortable, and suddenly I began questioning concepts like tolerance and innocence—societal perceptions of good and bad. I guess this story is the product of me trying to figure it all out. I wrote it for the duration of the two years I spent in the correctional facility and I’m so glad the drafting is over. That being said, it’s incredibly abstract, but still the most personal story I’ve ever written.

One of the things that I love most about the story is the form and voice, which steps away from traditional linear storytelling. What led you to choose the way you told this story?

The little girl came to me first. I kept writing her and she kept talking and asking me questions and breaking my heart and I wrote some more. I had several pages of her story but kept asking myself Who? Who gets her eyes? Who is worth more in this particular world?

I thought I’d have to write a “villain”—then I remembered something a wise professor once told me, “Always give your characters a chance to explain themselves.” So I wrote this man, and he had his own story. And then the only way I felt I could write it in a way that felt true was to have the two characters collide—in their realities and their narratives.

What are interests you most as a fiction writer? What are the things you're considering when you write, in terms of the stories you want to tell and/or elements of craft

Humor, tragedy, and Truth. Pulse, heart, and guts. Letting the characters show off and perform back flips on the page, rather than the author. The sentence. Nothing can break me down and move me the way a perfectly constructed sentence can—in the spine and on the tongue. Especially a last sentence.

For me, it all boils down to being human. Not to be me, T Kira Madden, but to really catch the human condition and nail it to a piece of paper. To provide a moment that allows, or, rather, forces a reader to say, “That’s me. This is me,” in whatever loving, tragic, or despicable way that connection comes about. Really, I think art should disturb in its familiarity. If I’ve upset someone, I feel I’ve done my job.

It’s certainly complicated. I’ve never felt as though I am an Asian American writer any more than I am a female writer, fiction writer, Jewish writer, queer writer, or New York City based writer, though I would be proud to be called any one of those things. Still, I am the most interested in good writing.

What we can do, as readers, is support diversity in the literature we choose to read. It’s not about being racially selective, but, rather, acknowledging the greater world, the greater human experience, and what all of us have to say.

Who are some of your literary role models and what are you reading now?

I never really think about literary role models as much as I think about the books or characters that have twisted up my life.  Edgar Allen Poe was probably my first crush as a child. Lolita was my first love. Nikolai Gogol, my first taste of what humor should be. Then came Jayne Anne Phillips’ Black Tickets, which made me want to write, Lynda Barry’s Cruddy, which taught me everything about the truth, and George Saunders who taught me to keep telling it.

Oh, and Beckett. One should always go to sleep with Beckett and you’ll have the best partner.

I’ve just read Bohumil Hrabal’s Too Loud a Solitude, which was absolutely glorious. And now I’m reading Gertrude Stein’s The Autobiography of Alice B. Toklas, and God is she everything and everything. I’d be pleased with one drop of that blood in my system, really. 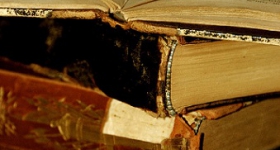