The daughter of a Tamil freedom fighter, M.I.A. is here to save us all.

M.I.A.—the British Sri Lankan MC—is the hot word on the lips of music critics and hipsters in search of something unique. Not to be confused with R&B tart Mya, M.I.A. blew up in late 2004 with one single “Galang,” but—got damn!—what a single. It’s a roller coaster of broken beat, ragga, bhangra, electronic buzzes and whistles. M.I.A.’s sing-song cadence is part chitter chatter, part feminine mystique with a “yah-yah heyyy” chant at the end that signals an uprising.

Born Mathangi Arulpragasam in London, the future MC moved to Sri Lanka when she was a baby. Her father, an engineer and activist, worked alongside Tamil freedom fighters, going into hiding for months at a time. The family moved around to Madras, India and London and then back to Sri Lanka. As the civil war reached its height in the mid-’80s, the family immigrated to London for good. It’s here where M.I.A.’s interest in music took root.

She admires Public Enemy and jacks into the local dancehall, garage and Asian Underground scenes. M.I.A. released her full-length album, Arular in February 2005. She and Hollertronix DJ Diplo collaborated on Arular and on the acclaimed mix “Piracy Funds Terrorism.” Along with the amazing “Galang,” she asserts herself on sure shots “Bucky Dun Gone,” “Fire Fire” and “Sunshowers.” M.I.A. also makes vibrant art, videos and short films. She spoke with Hyphen the night after her sold-out Los Angeles live debut.

How tough was it moving around so much?

M.I.A.: It was tough enough for me to want to turn it around on its head and say that I liked it. I knew it was something I couldn’t stop and it was just going to happen. I had to start seeing the positive in it. Apart from that, I had to constantly start from scratch getting to know people. It felt like wherever I went, people always seem to be like, the lowest common denominator.

Having to learn a new language and culture just seemed annoying in the beginning and then I got used to it. It taught me not to be attached to materialistic stuff like objects and cars and furniture and photographs. I think I have only two photos from my childhood, up until I was age 11.

Were you exposed to racism?

I tried to ignore it because it didn’t make sense to me. A month before I moved to London I was getting shot at for being a Tamil, and a month later I was getting spat at for being a Pakistani. They were lessons on human beings and what makes people do [those things]. I didn’t get caught up in it. Just ignoring and rising above it gave me motivation to do better.

Were your parents protective of you?

I only had my mum. I never grew up with my dad so I don’t know what he’s like. I think I’m a mixture of both. My mum’s really passive, quiet and she’s not feisty. She cared about bringing in food and getting us to school and stuff but that’s as far as it went.

How did your father’s participation with the Tamil Tigers affect you?

Growing up without a dad, I was going to school and turning up at parents’ meetings on my own. At the time everyone was like, “Oh if you had a dad he’d pay for your school and you’d have a better future.” At the time, my mom was bringing us up and she was like, “The only thing your father gave you was a name.” So that’s why I used [his name “Arular”] on my album to turn it into a statement that my mom always made. If the only thing he’s going to give me is a name, then that’s what I’m going to use.

Where do you feel most at home?

What music were you exposed to when you got to London?

Chart music, hip-hop and dancehall, then I got into the Asian scene—bhangra/raga. Jungle, house and garage mostly through the pirate radio station. Once I discovered pirate radio, that’s what I grew up on. I was listening to Madonna and Paula Abdul and then I heard Public Enemy and Roxanne Shante. It was like, “Woah, what’s going on?” That really blew my mind. Then hearing Jamaican pirate radio—that was really exciting. Hearing Supercat and Mad Cobra seemed really amazing to me.

You use a lot of military and soldier imagery and metaphors in your lyrics and videos. What is the reason?

The reason why I reference war isn’t because of my dad, but because it’s around my life right now. I grew up for so long without doing music or talking about that kind of stuff. But it seems that after 2001, war was on the front page every single day, on every channel. Everything was escalating and getting bigger and bigger and more and more untouchable for young people to get involved in what’s going on in politics.

I just tried my hardest to not let politics dissipate to the back of my head.

Everybody doesn’t feel right to comment on politics because they don’t know enough, but that’s exactly the whole idea the government understands when they talk on behalf of the people. When I was in London, a lot of people were feeling like this. I have a right to talk about it because of my past. So I don’t care whether people feel it’s naft (dodgy) or scary to talk about politics because it was my life. But ultimately I started doing it because of what’s going on here today.

How did working with Diplo change things?

When I met Diplo, he pulled me back instead of pushing me forward. He hipped me to the importance of making a mixtape and actually turning up to a club and giving it to people with your hands and talking to people. That was really, really important to come to America and do. He’s so hands on. He doesn’t care about anything else about the machinery. He makes a song or mashup track that evening then he’ll burn it on a CD and take it to a club and play it and people will hear it. If anyone wanted it, he’ll send it to them MP3. He wasn’t making money, he was spreading the word.

How has your lyrical flow evolved?

I think it came from not understanding how music is made. When I sit down to write something, I didn’t know where a bar started and where it ended. I didn’t know what four, eight or 16 bars were or anything. And I couldn’t sing. I didn’t know what a tune, melody, pitch or anything were. I still don’t know. It’s guessing. It came about from me coming in the middle of a drum loop wherever I wanted, choosing different parts of the songs that moved me instead of having a structure.

I’m learning really slow. I know one day I’m going to have to learn. It’s a progression. Right now, I’m riding along thinking it’s fine. “If it ain’t broke, don’t fix it.” That’s what I keep telling myself.

Do you consider yourself hip-hop?

You’re the first Asian female rapper to come out and represent on a worldwide level. Do you feel any level of responsibility?

I didn’t think it was something until I realized I’m the first one to come out of a real immediate Asian community. There are artists who make music but don’t step out of their circle. So I don’t feel responsibility. What I can do is be an artist and get on with it and if I collect responsibilities along the way, I’m going to do my best to check them.

There’s a line of thinking that you could be our Missy Elliot.

Really? Wow. I just hope that it pays off because in the beginning I had to take a lot of stick for not being so traditional, maybe that’s what I needed. We’ll wait and see.

Are you comfortable talking about the tsunami disaster?

No, it’s the only thing I’m not comfortable talking about. (Long pause.) It’s really confusing. Until I go there and see it myself, I can’t really talk about it. I know as much as everybody else. I know I have more of a responsibility to get involved but I have to find out exactly where to go.

Is there any message you want to impart to Asian Americans?

I just want to say: I was really impressed by the turnout at the gig yesterday. There seems to be a load of Asian Americans there. I haven’t met the community and it opened the world up a little bit yesterday. I really want to access it. I want to get in touch. 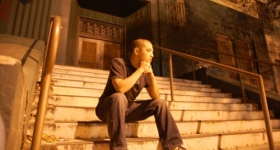 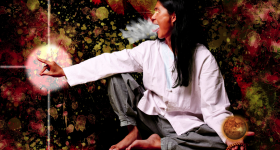