To be honest, I hate dating. But when I saw the call for auditions for the reality show Blind Date, I decided to give it a shot. I had never seen an Asian American man on the show, and just about all the Asian women were not only the “me-so-horny” thong-and-blonde-streak-porn-fantasy stereotypes, but also were inevitably matched up with some swaggering white dude. So I thought to myself, “I can be that first Asian guy on Blind Date!”

At the audition they took a Polaroid of me and gave me a questionnaire. One of the questions was: “If you could date any celebrity, whether they are married or not, who would that be?” Since I wasn’t taking this thing too seriously, I just decided to be completely honest.

They put me into a hotel room for an interview in front of a small video camera. The associate producer, Gina, a burned-out ex-cheerleader type, started reviewing the questionnaire. She hummed along, until she got to that one question. There was a long pause… then she asked in her squeaky voice, “Who is Hélène Cixous?”

Without a pause, I told her, “Hélène Cixous is a fantastic post-modern philosopher. She is associated with Julia Kristeva and the deconstructionist Jacques Derrida. She’s been head of Feminine Studies at the Sorbonne University in Paris and her lectures on language and writing are amazing. She might be up there in years but her theories excite me like nothing else.”

She looked at me with a mix of bewilderment and embarrassment, quietly said, “Excuse me,” and walked out of the room.

She came back with her boss. “Hi Russell, I’m Brooke. I’m just going to help Gina out here a little bit. We’re trying to get a sense of what type of woman we can match you with. I’m afraid we don’t know who Miss Sicksoos is. Could you help us out, and name another celebrity you would like to date? And this time… try choosing an American.”

I paused. Then said, “Angela Davis.” Brooke’s eyes lit up, and Gina started to look a little giddy as they said, “Ahhh!”

It pained me to inform them that they were talking about Angela Bassett. “Well, you got the race right. Dr. Angela Davis is a former Black Panther who went to jail for allegedly taking part in a shootout back in the ’60s. She was on the FBI’s most wanted list. She was acquitted and upon her release she became one of the most respected radical scholars—and she still looks hot in leather!”

Brooke looked annoyed. “We will hold on to your file here, but I must tell you that it will be very difficult to match you up with anyone, but if we do…”

The door was already open, and I was being led out. Gina was still looking at my file and noted that I live only a block from the hotel. “Hey Russell, what sign are you?” Uh oh… “Um… Libra…”

“Libra! Terrific! Air sign. I’m an Aries, a fire sign. We’re a good love match! Here, let me give you my card, this is my room number, that’s my cell, I should be finished here at around 7 p.m., if you aren’t busy, that is…”

I politely took the card. She gave me a huge hippie hug and I made my way to the hotel lobby.

I hate to confess this but I didn’t call her. Like I said, I hate dating. I just wanted to be on TV. 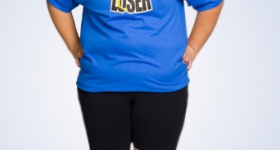