Just a thought before the weekend: if I tell you that I — an Asian American woman who lives in San Francisco — have a boyfriend, what ethnicity would you assume he was?

A friend says that if he met an Asian American woman in the Bay Area, and she mentioned she had a boyfriend, he would assume her boyfriend was white. Do you agree? What does this say about dating in our community? Does it make a difference if the woman lives in another place, say Chicago or New York? What assumptions do you make about girlfriends of Asian American men? And what about gay Asian Americans? 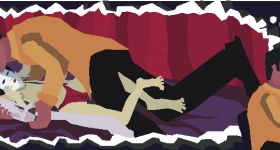