First stop on your gift-giving list should be ... US! Hyphen needs your moola! Drop us a ten or a five if you're super-broke, and do it in honor of the aZn in your life. Because your conscious aZn friends 'n' family would MUCH rather you donate in their name than contribute to that Wii. Really. And on our side, like Obama, we'd rather have a small gift from each of you than a big ol' whopper from one or two millionaires ... wow, I just heard myself write that ... okay, we'd rather have both.

If you're too cheap hard hit, here's an easy way to give to Hyphen without actually, you know, GIVING: To buy any of the items below from Amazon, click on the Amazon link on this page to your right (scroll down a little) and Hyphen will get a percentage of your purchase. In fact, I'm going to take away the links I so carefully put in this post, to force you to click through our little monetizer (not really). DO IT!

Bridge Across the Blue by Pireeni Sundaralingam & Colm O' Riain
If
it's time to get touchy-feely and all extra conscious -- and if you're
already wearing a HUGE knit cap over those dreds and your closet
contains textiles from more countries than M.I.A. has records -- then
this album may smack you off your yoga mat. Then again, this anthology
of folks from all corners and traditions spitting poetry over music
might just reify your fair-trade complacency. Whatever. One love, man.

Robot Stories by Greg Pak
A
feature film made up of stories about Asian Americans and robots. I
CANNOT express how cool this is. There's one with Our Tamlyn as a BAD
MOM to a baby robot. And there's one with NOT YOUR USUAL interracial
relationship (it's interracial, and intertechno). Plus, you get to see
Greg Pak with his shirt off, which is a much nicer sight than, say,
Steven Spielberg with his shirt off, or Darren Aronofsky with his pants
off, or Ron Howard with his hat off.

Dance Dance Revolution by Cathy Park Hong
If you're thinking "quintessential," you're not far off. Hong's collection of poetry (that's right) is a series of monologues, in Korean/English/Spanish/Russian/Etc. PIDGIN, from your tour guide to the desert hidden somewhere in the DMZ, where the Dance Dance Revolution took place. I shit you not. If your gift target doesn't like it, you are PERFECTLY ENTITLED to look disappointed and say, "What, you didn't GET IT?"

American Born Chinese by Gene Yang
If
you thought that everything had already been said -- ad nauseum --
about the suburban aZn experience -- and let's be honest, I DID THINK
SO -- then you haven't seen "The Cousin Chin-Kee Show!" Yes, it's a sit
com! Inside a comic book! Starring a guy who says "Me Chinese/me make
joke/me put pee-pee in your coke!" That's all I really need to say,
isn't it? Beside, of course, that this was nominated for a National
Book Award. 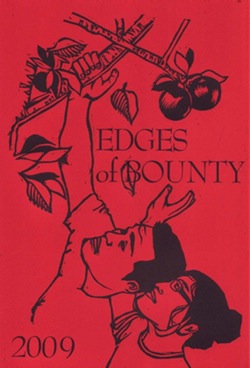 Patricia
Wakida is a rare bird, but fortunately for the Bay Area, we're full of
rare birds. This one does letterpress printing, woodcuts, bookbinding,
and -- as a sansei (or is it yonsei?) from Fresno, has a strong
connection to the history of Asian American farming in California's
Central Valley. For the past ... many years, she's been collaborating
with printmaker and comics artist Garrett Izumi on a series of
hand-printed calendars themed after the East Asian zodiac animals. But
this year the two artists have gone their separate ways, calendar-wise,
and Patty's 2009 calendar draws images instead from the alternative
agriculture book Edges of Bounty. Here's a preview of some of the images, and you can order this limited edition piece by wasabipress [at] yahoo.com (emailing Patty here).

Part Asian, 100% Hapa by Kip Fulbeck
The
coffee table book that no conscious aZn should be without! Artist Kip
Fulbeck collects photos of hapas he took all over the country, plus a
self-description from each. He did this not because he has a hapa fetish, but because he IS hapa ... and has a hapa fetish! It's a simple and powerful concept, really. No, really. Plus,
after spending an hour flipping through this book, your friends will
have something more interesting to say about the mixéd of race than
"oh, hapas are always better looking!" Even if we are.

Wofflehouse Studio Sale by Jenifer Wofford
Yes, that's right, Woff's sellin' her work online fer super
reasonable. You know how much I love Woff's work from the article I
wrote about her
for the Spaces issue. She does comics-influenced drawing and painting
about Manila, and durians, and consumerism, and labor, and wimmin. And
also 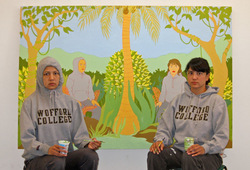 performance, video, and installations. And other stuff. She does a
lot of kinds of work. And all of it is awRsome. Check it out, buy
stuff, and be glad you invested, because she's been going all over the
world in the past couple of years for exhibitions and residencies,
which means she's getting set to blow up, and pretty soon you'll never
be able to afford her again. Stheriously.

Watertown by Invisible Cities
Become a fan of this SF-based indie pop group with the Invisible Cities' first album, just in time to rag on them for not getting their second album out for the holiday buying frenzy! In this one, you'll learn two-fisted drinking and the carpet pattern in Han's childhood home! And you'll be indirectly supporting SF-centric Asian American cronyism, since Han is sleeping with a Hyphen founder who is not me but shall nevertheless remain nameless.

Type O Negative by Joel Tan
This is so completely new a release that I haven't seen it yet, much less read it. But Joel is one of our best poets IMNHO, so you pretty much can't go wrong with this new poetry collection. Yeah, I gots no more to say about it, cuz I haven't read it. Did I say that already?

Ulysses by Goh Nakamura
More cronyism, but you'll be glad you did. This is Goh's second album, and his first with a full band (he Clark Kents as a singer-songwriter, all soulful and guitary like that). It's groovy, and some of the best songwriting you'll encounter this year. Or last year. Or next year. Or in the next twelvemonth, regardless of artificial and culturally determined measurements of time. If you even care, here's my review.