The Hmong community of Fresno is the second largest Hmong settlement in the States. Earlier this fall a Hmong community garden created without permission 13 years ago on public land was threatened when the city decided to take back the land to build a police station.

The community looked to a new parks director to help them and at first he was enthusiastic.

He envisioned a cultural center, a park, carving the garden into
smaller plots involving more people from all over the city, walkways,
statues. It would be called the National Hmong Friendship Garden. The
plans cost $2,500.

"He had plans drawn up. They were beautiful,
expansive," says Edie Jessup, director of a hunger nutrition project
with Metro Ministry. "We were all impressed. But then he said, 'By the
way, it's up to you to raise the millions of dollars.' "

Of
course, the garden was partly about growing food for a community that
was "still struggl(ing) with poverty and food bills." City officials
said the police department served the community as a whole, and
that was that.

After protest and advocacy -- and the great article in the Fresno Bee I linked to above -- the city tried to arrange to move the police station to another site, but the plan was kiboshed when the city council tied on the vote. Now the garden has to move, although it hasn't yet. 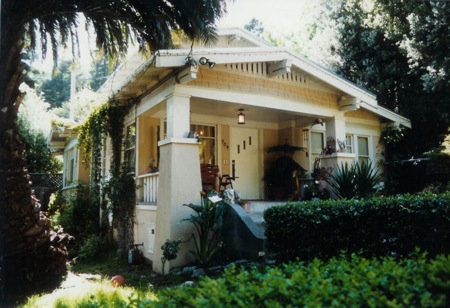 Given the same state, and the same time frame, we have a much different second story: Curbed SF tipped me off to a new trend in China: organizing real estate trips to downturn-hobbled San Francisco, L.A. and Vegas to buy up foreclosed homes.


As we have learned, the combination of rising housing prices in China
and the appreciation of the Renminbi coupled with declining real estate
prices in the US and the depreciation of the US dollar, has already
become an impetus for Chinese investors to buy properties in the US.
Besides, due to the continuous appreciation of the Renminbi, it is more
cost effective to shop in the US. At the same time, the US sub-prime
crisis has forced the prices of some of the mortgaged houses to drop,
increasing the interest of some investors to go house hunting.

Apparently,
half these folks


plan to buy houses when the US housing market is at its low level
so that they can keep their children company when they study in the US.
"My daughter started school in the US in August this year. I might as
well buy a house if it is really cheap and I can visit her by the way,"
said ... one of the registered members.

Okay. On the one hand, we've got a classic immigrant grit story superimposed on a group of refugees from a botched American war. They are traditionally agrarian, they're poor and dispossessed, they've squatted government land, and their welfare is not considered to coincide with broader community welfare. On the other hand, we have our greatest fear: an Asian superpower rising to meet us at a moment when our economy is faltering and our military superiority isn't doing us any good; citizens of that superpower are replacing us in our very own, white-picket-fenced dream homes, and not even living there but using them as edu-dachas!

The first is an age-old enclosure of the commons issue updated to post-Cold-War racialization, where the enclosing force is actually public ownership of a more institutional sort. The second is a new (or is it age-old?) situation: the US as exploited, exploitable land. This will be
the first time since ... I don't know ... ever? ... that the US has
had foreign carpetbaggers coming in to take advantage of the mess we got
ourselves into. And our family homes are now being colonized by the very people the US colonized in the mid-19th century. Does this make them Asian Americans, or are they going to be something else, something new?

Are these just the same old themes playing out yet again? Are we seeing new trends in immigration, land, ownership, conflict? Are there similarities in these two cases?

boo wrote on Sun, 12/14/2008 - 1:35pm
enjoyed this entry. really complicated issues at hand. am not really sure what to make of them. i will say though that the older chinese generation (e.g. my own father) is all about investing in property. to them, a rich man is one that owns land. so i am not really surprised that there are these organized real-estate purchasing trips from china especially since EVERYONE is hyping this time out to be "a great time to buy." with that said, if these purchases are successful, they'll just end up going to their kids in the end... oh the things that so many chinese parents do for their kids... many of them probably ungrateful as hell...
claire wrote on Mon, 12/15/2008 - 11:45am
it's interesting that this is coming NOW, at a time when chinese americans have no tradition of land ownership, and mainland chinese have also seen their tradition of familial land ownership broken. i'd be interested to know if that value -- fortune comes out of land -- still exists appreciably. it's been broken in european and american urban cultures anyway.
Lxy wrote on Wed, 12/17/2008 - 4:31pm
"Okay. On the one hand, we've got a classic immigrant grit story superimposed on a group of refugees from a botched American war. They are traditionally agrarian, they're poor and dispossessed, they've squatted government land, and their welfare is not considered to coincide with broader community welfare. On the other hand, we have our greatest fear: an Asian superpower rising to meet us at a moment when our economy is faltering and our military superiority isn't doing us any good; citizens of that superpower are replacing us in our very own, white-picket-fenced dream homes, and not even living there but using them as edu-dachas!" Sounds like a standard case of (White) American chauvinism or anti-Asian Yellow Perilism in both instances.And let's put it this way. Americans are the last people on this planet to portray themselves as victims of anything.The USA is a Western colonial nation premised upon the theft and occupation of an entire continent--past and present. Indeed, for those living in California or the "American" Southwest, you could say they're actually living in USA-occupied Mexico, or Aztlan.Today, this form of American "Manifest Destiny" has gone global, with the USA invading and colonizing nations from Iraq to Afghanistan--not to mention implanting American military bases and imperial outposts in over 100 different nations.And don't forget, it's the USA that has been the driving force behind Capitalist Globalization, which has compelled nations around the world to privatize their land and enable American vultures ... sorry investors to buy/gobble them up.But US citizens are in complete political denial about the devastation wrought by their American Empire around the globe. And so-called (cough) Progressives are just as guilty of this as any Right Winger--and in many ways, they are worse.