My Weekend at the Asian American International Film Festival 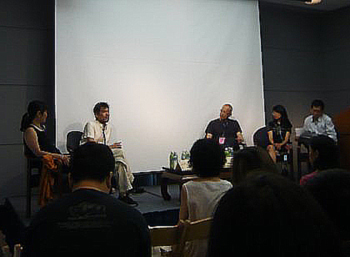 I met up with Hyphen's publisher Lisa Lee for some of the events going on at the AA International Film Festival in Manhattan. For those who haven't been to the Asia Society building, it is this huge, futuristic, stylish building in Manhattan's Upper East Side (70th at Park) that hosts all sorts of events throughout the year. Lisa has been at the festival since the start and been to many screenings. We went to the opening night afterparty at Forbidden City bar, then I joined her for films one day, and also a round table discussion the next day, as well as other random activities.

The films we saw were 'Heart Squared' and 'Option 3'. 'Heart Squared' was a nice short that was surreal, eccentric, and very stylish, and since there's no easy way to explain the film, I won't even try. 'Option 3' was a full length movie directed by Richard Wong, who was there for the screening and gave a brief talk at the beginning. Unfortunately, I couldn't sit through the entire thing, and though I kept waiting for it to get better, I ended up leaving midway. It wasn't bad per se; I just didn't personally enjoy it very much. 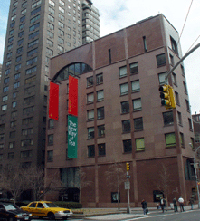 The main topic was about what were Asian American aesthetics in various forms of art and entertainment, however the discussion branched off into interesting admissions or comments regarding identity, race, design, motivations behind their works, a generational gap amongst Asian Americans, how Asian Americans can create a culture or community that goes past an original political reason, as well as some personal anecdotes. For me personally I enjoyed finding out how David Henry Hwang thought/spoke, and finding out Wayne Wang has the best laugh ever.

To add a personal comment about the generational gap brought up during the panel, I would agree that the previous generation and younger generation are dealing with different issues, values, and goals, as the younger generation attempts to define Asian American culture.  I found it interesting that Wayne Wang was on this panel and passionate about the main topic, as I had long resented him for 'Joy Luck Club' and the hugely damaging effects it has had for Asian America, Asian men, and stereotypes about Asian sexism/oppression that are rampant in America, that get reinforced through forced readings of Amy Tan's book and screenings of the Uncle Tom film in high school curriculums across the country. The book/film may have been a huge breakthrough for the previous generation of AA artists, but for my generation, maybe I'm speaking only for myself, but I don't think there will be a thank you.

Anyway, I think the panel topic itself was flawed; some of the panelists seemed to go about the solution backwards, first stereotyping or thinking about what Asian aesthetic or culture or behavior was, and then applying it in whatever art field they were in, when I think it should happen in reverse, basically instead of following generalizations or imitations, to be innovative or original or creative, and that by simply being Asian American you are helping to define the Asian American aesthetic. To clarify or explain what I mean, think about what it means to define the Latin American or European American aesthetic, and think about what came first, the creator or the generalization.

By the way, on a totally random side note, Lisa Lee has been doing a great job the entire time promoting Hyphen and hustling for subscriptions. 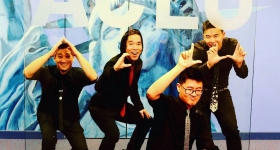 lala wrote on Mon, 07/14/2008 - 11:33am
Sounds like an interesting panel. The point about how Asian American aesthetics = whatever the dominant culture in America deems seems sad but true to me. It could be said of people in general --that they want to fit in (and so spend their time plotting how to buy a BMW and the next status handbag instead of creating their own style). Did anyone talk about what we can do to support truly creative artists who aren't following the mainstream? How can we elevate them if most people's idea of success is defined by what mainstream society says? People who are doing their own thing don't seem to get a lot of love. Case in point: this magazine. I enjoy Hyphen and Giant Robot -- magazines that don't follow a mainstream magazine formula. But in the big picture, these magazines are small and don't reach that many people. Even in the Asian American community they aren't very big or known.
Samara wrote on Wed, 07/16/2008 - 7:03pm
Lisa Lee rocks!
Al wrote on Tue, 08/05/2008 - 1:21pm
For anyone interested there is an extraordinary documentary called Passing Poston about the Japanese American citizens forcibly placed in interim camps during WWII. The film is being shown at the Two Booths Pioneer Theater from August the 8th till the 14th. The documentary follows the tales of four former internees, and shows their struggles with their painful past and their search for a place to belong in a country that labeled them the enemy. It is a must see!!For tickets and info go to www.twoboots.com/pioneer
snoniexia wrote on Fri, 10/10/2008 - 12:25am
Hello.:) The natural photo of the new arrival, taken by Emma Tallulah's dad,Bye.