Anthony Kim: The Next Tiger Woods?

I know, I know, lots of Asians play golf. But many of those golfers are transplants from Asia and unfortunately happen to be targets of resentment by Caucasian American pro golfers, for example the LPGA's Jan Stephenson who said in a 2003 interview:

"This is probably going to get me in trouble, but the Asians are killing our tour. Absolutely killing it. Their lack of emotion, their refusal to speak English when they can speak English. They rarely speak."

Ah, the sensitivity and open-mindedness of professional golf.

This being the same institution whose members call Tiger Woods "that little boy," make jokes about him getting lynched, or completely ignore the multiracial background by which he prefers to be known.

Luckily, the Asian American golfers—like Kim, Michelle Wie, and San Francisco Bay Area native
Christina Kim—aren't being treated with as much disrespect as their Asian counterparts, perhaps as a result of the sports world's ongoing struggle to accept that "Hey, Asian Americans are, like, totally American." 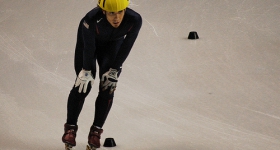 Bob wrote on Mon, 10/20/2008 - 3:29pm
I'm not really too sure the purpose of this article--and who-ever thought that the elite world of golf was ever inclusive? Have you never realized that golf has primarily been a sport for the wealthy, and would exclude/criticize lower class individuals before excluding based on race. It's more of an ego issue with golfers than an issue of race (meaning, the root of your "disrespect" claim could be more about spotlight than racial tensions). Why not discuss the progress of asian-americans in sports such as basketball, baseball--and in my opinion, yes, golf. Michelle Wie had the most media coverage since Tiger Woods (who is also part asian) burst onto the scene. Maybe if you high-light the positive and pick your battles better--or make your purpose more clear...your writing would provide a better reflection.
Asianmommy wrote on Wed, 07/16/2008 - 3:42pm
Ouch! I had no idea that Asians had that kind of reputation in golf.
joe wrote on Wed, 07/16/2008 - 8:50pm
asianmommy bc you are ignorant and purposely ignore that kind of drama as if it will go away on its own.....idiot!!
sylvie wrote on Wed, 07/16/2008 - 9:57pm
let's keep the comments respectful, please.
Phil wrote on Fri, 07/18/2008 - 4:34pm
Michelle Wie was the next..