The film chronicles the two MMA fighters as they prepare for professional fights under the Strikeforce organization. (Since filming, Shields has begun competing with Ultimate Fighting Championship [UFC]). As with any action/sports film, there are a number of the usual training montages. While it is interesting to watch Shields run around a parking lot lugging an absurd number of weights or Beerbohm getting hooked up to an IV drip, the best parts are unrelated to fighting. We get it, guys: MMA is hard. Training is hard. But what we really want to know is: how do you pay your bills? how do you feed your family? how do you maintain any relationships with such a rigorous training schedule?

The fighters’ frank discussions about costs were easily the most compelling parts of the documentary: the money they are not making even as they train up to three times a day; the health insurance they can’t afford; the inevitable injuries they sustain in such an intensely physical sport. They have realistic expectations of their dreams. They know that most people don’t make the sponsorships, don’t get the paycheck. And yet, there they are, trying.

Director James Z. Feng, who also executive-produced the film, does meticulous research and presents the viewer with as many facets of the MMA world as possible: trainers, promoters, chiropractors, family, statistical data. Through the interviews, the athletes and their teams reiterate the difficulty of the sport and how much sacrifice is required to be a top-level fighter. However, the documentary does not show the consequences of the fighters’ single-minded drive. Yes, we are told about their sacrifices, but we do not see their homes, nor hear from
their significant others or children. There are leaps of faith the viewer must make, to take these fighters at their word -- especially when we learn that Shields was due to make $150K for his next fight. You want that curtain to be peeled back just a little bit more.

Nonetheless, the energy and passion Feng brings to his project are present from
beginning to end. He hooks you into the fighters’ stories and, almost unconsciously, you find yourself rooting for them to win and achieve their dreams. Like Shields and Beerbohm, Feng is fighting to get noticed and to make a successful film. And you end up wanting Feng, like the fighters he chronicles, to succeed, too.

Hyphen is a promotional sponsor of Fight Life. 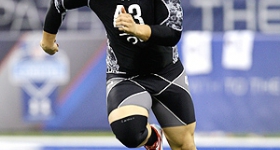 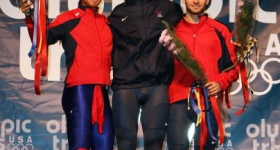