It's fitting that Hyphen launched a release party for its Survival issue the same Saturday that the New York Knicks annointed a new star point guard who could save their season.

Jeremy Lin, the first American-born NBA player of Taiwanese descent, has become the new toast of the Big Apple, after New Yorkers switched their collective pro sports attention from their Super Bowl-winning Giants to the embattled Knicks.

Lin could be the poster boy for survival in the NBA. Hyphen has kept tabs on the 6'3" 200-pound point guard since he was a collegiate star at Harvard University, which he attended after top choice UCLA didn't show interest in his basketball skills and a recruiter from Cal (my alma mater) shamefully called him by the wrong name.

Get the backstory on Jeremy Lin: 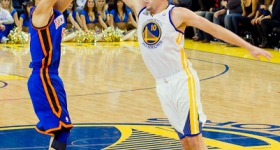