Could a Japanese national be the future of American soccer?
George B. Sánchez-Tello and José Antonio Romero
August 15, 2016

On a late January morning in Los Angeles, Ryo Fujii emerges from the subterranean hallways beneath the Los Angeles Galaxy’s stadium to train alongside American soccer stars like Jermaine Jones, Jordan Morris, Christen Press and Becky Sauerbrunn. Slender at five foot 10 and topped by a spiky, black shock of hair somewhere between bedhead and fashionable, Fujii is about to begin his second season as a professional athlete. It is the first day of training for the Galaxy, American soccer’s marquee brand. Each moment promises a turning point for Fujii. “Going from college to professional, living by myself with no parents – I’ve realized it’s the real world now,” says the 19-year-old midfielder. “I’ve learned a lot this past season. Now it’s the second year and I want to prove to everyone that I can actually do it.”

Soccer’s popularity in the U.S. is resurging after a near half century absence from the World Cup. Domestic interest stem from the US Women’s historic third World Cup title this past summer and the Men’s inspired performance two years ago in Brazil against opponents like Portugal, led by world renown Cristiano Ronaldo, as well as tournament champions Germany. With growth come growing pains. In the United States those pains come down to a single question: why is a nation of 321 million with unlimited resources seemingly unable to produce 11 men talented enough to succeed among the world’s best teams? There is no single solution, but Fujii’s budding career may provide an answer.

The game turns on a moment. Training makes reaction instinct. Opportunity presents itself. Individuals conspire together. The Los Angeles Galaxy, Major League Soccer’s most accomplished team with five championships, created an opportunity with Ryo Fujii, a young local targeted by recruiters. Rather than wait for the young man to complete his higher education and go professional, the Galaxy brought professional soccer, and a college education, to Fujii. Upending the concept of the student athlete, Fujii left college to become a professional athlete for a contract that ensures the Galaxy pay for class. This novel approach to developing American youth, combining professional soccer training with the opportunity to earn a bachelors degree, is the first of its kind.

Jovan Kirovksi, the man responsible for bringing Fujii to the Galaxy, believes this approach will alter the choices of young athletes -- and thus, improve the trajectory of American soccer. There are two main approaches to professional soccer in America: play in college and eventually earn a professional contract, or forgo the degree and globetrot through various professional leagues. What the Galaxy has done with Fujii is totally unique, Kirovski says. Having played in England, Germany, Portugal and the U.S., Kirovski is unaware of any team in the world that offers higher education. Fujii is the first. The Los Angeles Galaxy does not anticipate him being the last.

“We know in the future there will be more and more cases like this,” says Kirovski.

Born in Hong Kong to a Japanese father and Korean mother, Fujii came to the United States when he was six, knowing nothing of the language or culture. He recalls the confusion: not understanding Kindergarten nap time and ending up in detention for the first two weeks of school. Humble and soft-spoken, Fujii considers himself a smart player and looks at the game as a whole. He’s the type that wants to create plays and assists.

“I see soccer as a puzzle – moving pieces,” he explains slowly, his tone emblematic of the laid-back, Los Angeles beach front community from where he hails. “If one player goes here, you have to fill up the hole.”

Two years after arriving, Fujii began playing recreational soccer. His ability attracted interest from expensive pay-to-play clubs. The best club players, like Fujii, are then recruited for elite, soccer academies, which funnel youth into either top college programs or professional teams. In 2011, his academy team  represented the United States in a prestigious international youth tournament staged at Old Trafford, the home of global soccer brand Manchester United. There, at age 14, he made his decision.

“The greatest of the greats play there,” recalls Fujii. “That’s when I realized I can keep up with these teams from all over the world.”

Two years later, Fujii was recruited to the Los Angeles Galaxy’s Youth Academy. There he was scouted for the U.S. national team, which would have brought him closer to playing in the World Cup – soccer’s highest honor. But although there had been interest in Fujii, conversations stalled on the issue of nationality. Though he has lived in the United States for most of his life, Fujii is ineligible to play for the U.S. as a Japanese national. While that hindrance can be eliminated with paperwork, questions surrounding citizenship and national allegiance are not as simple.

“It’s like asking me if you like this country better than that county,” Fujii says, scratching at the thin black goatee emerging from his chin.

Yet Fujii’s technical ability – ball touch and control  – is what makes him stand out on American fields. Fujii’s technical skill is often credited to Japanese style of play, which is surprising since his formation as a player was in the United States. (In soccer, certain styles are accredited to culture, though that’s not always the case.) He admits to once considering himself one of the most technical young players in the United States. But during a 2013 family trip to Japan, he spent three weeks training with a youth squad in the city of Kumamoto. Suddenly, Fujii’s American traits set him apart.

“When I went back to Japan – oh my gosh – those guys were very technical but what they were lacking was physicality,” he recalls. “They couldn’t compete with me, physically.”

At 16, Fujii’s team won the national championship for its age division. They caught the attention of top-tier college coaches, including Tim Vom Steeg, the men’s soccer coach at the University of California, Santa Barbara.

“[Fujii] was a prominent player on that team and would have been called into the national team, in my opinion, if he was a U.S. citizen,” Vom Steeg said.

By then, Fujii decided to seek a college with an NCAA Division I soccer team. The collegiate path to a professional soccer career was safer, Fujii figured initially, than bypassing college in order to go pro.

In the Summer of 2014, Fujii joined Vom Steeg at Santa Barbara. In his first season, Fujii started most games, attended class, earned a 3.0 grade average and, in Vom Steeg’s words, “did all the right things.”

“With him, we saw that over the course of three to four years, he would have been one of the best in the country,” said Vom Steeg.

But three to four years is a long time to a young man. Even when a player decides to go the college route, the specter of a professional club offer remains tempting.

“Freshman in the first year, they have a lot of struggle. The rigor of class, soccer against men three to four years older and you are thrown into games where there’s 10, 12, 13,000 people at the game instead of 75. All of these things hit you and it’s a real challenge,” Vom Steeg explains. “If you show up after three months, the hardest time for any player, and say ‘I have a better set up,’ that message can be very appealing.”

“The kid wanted to be a pro,” Kirovski said. “He didn’t want to go to school at Santa Barbara anymore.”

Fujii’s parents, Angie and Tomohiro, were concerned about school. But the Galaxy played an unused asset: California State University, Dominguez Hills, the university campus where the team is based. The Galaxy offered to pay for Fujii’s classes, allowing him to train professionally in the morning and study toward a bachelor’s degree in the afternoon.

Fujii sought the counsel of friends, family and other athletes. In particular, one former coach echoed Vom Steem’s reasoning: better for Fujii’s athletic development to join the Galaxy now and begin professional training rather than wait. So with less than one month left in his second quarter of college, 18-year-old Fujii left Santa Barbara to join the Galaxy and start school at Cal State Dominguez Hills.

But the path onto the Galaxy’s starting team isn’t yet clear, notes Vom Steeg. There is tremendous talent on the Galaxy’s second division team Los Dos, for which Fujii currently plays. How does a player like Fujii get promoted onto the first team that boasts, to name only two, Liverpool legend Steven Gerrard and Mexican star Giovanni Dos Santos?

“How do you make it? That’s where it goes sideways and it’s a higher level question: what is the best route to make it?” asks Vom Steeg.

Ryo Fujii’s first season with the Galaxy came to an end in Fall of 2015. It was the league championship, played in rain with the temperature hovering in the mid 40s. The game was scoreless until the 65th minute when Los Dos’ Daniel Steres launched a free kick, which ricocheted off the back goal post, only to be rocketed forward by French teammate Bradley Diallo. Again, the ball hit the post and reversed towards a crowded field of athletes, finally to be sent to the back of the net by teammate and Costa Rican Forward Ariel Lassiter.

For Los Dos, four of the starting 11 were products of the Galaxy’s youth academy. However, Fujii, a midfielder, wasn’t part of that group. He never played that evening. Instead, Los Dos borrowed five men from the Galaxy’s top-tier squad, including three midfielders. It was a matter of experience, explains Fujii of his absence.

Meanwhile, mid-terms had begun at CSU, Dominguez Hills. But Fujii didn’t have to worry about preparing for a test or submitting a paper. He had taken the semester off to focus on soccer. Whether Fujii manages to score high both on and off the field remains to be seen.

George B. Sánchez-Tello is an award-winning reporter who writes and teaches in Los Angeles. He watched Fujii during the 2015 U.S. Open Cup. 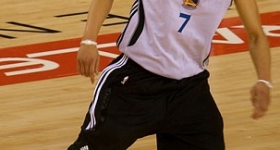