It's LINSANITY all over television, in newspapers, and the internet!!  But just as Hyphen had the early beat on some recent breakout musical artists (cough, FEM, cough), our staff has been way ahead of the mainstream in covering Jeremy Lin since 2009, while he was still a player at Harvard. Here's a quick Hyphen chest-thump, of past articles and in-depth interviews with the NBA's newest star before he became a national sensation:

For those who might have recently woken from a coma, Jeremy Lin's journey has been a surreal made-for-movie story, from receiving no D-I basketball scholarships (despite being California HS player of the year), to going undrafted by the NBA, to rotting on the bench of multiple teams without getting a chance (and sleeping on the couches of teammates), to now being the talk of the NBA. Jeremy Lin's 30.7 point, 8 assist average through now 4 games (all wins) has broken records along the way. (Lin matched Isiah Thomas's 1981 record with 28+ points and 8+ assists in first-ever start -- and has scored more points in his first three career starts than any player since the NBA merger!)

But the recent attention has not been all positive. As has happened at every stage in Lin's career, subtle bigotry and prejudice taints the commentary around him, with many "experts" still giving backhanded compliments like Jeremy Lin is "deceptively athletic," crafty (i.e., clever but not quick), or a marketing vehicle to replace Yao Ming. No matter: time will come when these naysayers jump on the bandwagon the same way his old teammates came to root for him, too. 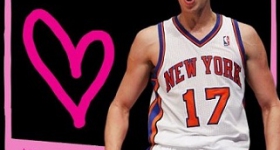 Anonymous wrote on Thu, 02/16/2012 - 11:01pm
I'm disappointed that only racism was called out in Whitlock's comment. It is a failure on Hyphen magazine to miss who represent and spoke on behalf of "Asian-Americans" which if you have forgotten includes women. Hyphen should recognize that in only acknowledging racism in the media is limiting and a slap in the face to all women of Asian descent. There is a pervasive rape culture messaging that is often ignored in the fight against racism. It is narrow and backwards and also bigot. I hope you can do better in the future.