Last week, Harry posted on Sacramento's Screen on the Green series removing Mickey Rooney's scenes from "Breakfast at Tiffany's" before a free viewing. The screening -- sans Rooney's yellowface turn as Mr. Yunioshi -- ended up being canceled and replaced by "Ratatouille." The Sacramento Bee caught up with Rooney on the phone this weekend to get his insight on that infamous role.

Some of the highlights:

"Don't break me up – I wouldn't offend any person, be they black, Asian or whatever."

"I was born in Brooklyn, delivered by a Chinese doctor on a table in a boardinghouse on Sept. 23, 1920."

"I came from a poor family. My father was from Glasgow, Scotland; my mother's brothers were brakemen on the railroad. We didn't have anything but mush for breakfast."

And the kicker: "Rooney's wife, Jan, who said they love Chinese art, food, culture and medicine, explained that the film role was meant to be fun. 'It's terribly sad, and I feel bad for the people taking offense,' she said."

Well, that explains it all. Wearing buck teeth, taping your eyelids, and adopting a stereotypical Asian accent in a cinematic classic (whilst denying the racism behind it) is all good if you grew up poor ... and if you have an acupuncturist.

I realize they're old. It'd be easier getting an 88-year-old to slam dunk a basketball than to have him or her shake these racial notions that they've been taught and re-taught since they were kids. But younger generations would be remiss if they didn't school these older folks on how their legacies have affected us. Rooney says it "breaks his heart" to hear these accusations of racism. Well, if you've never been the target of countless variations of a Mr. Yunioshi impression (and yes, it is much more than just playground taunts), then you have no real claim to that heartbreak. I don't care how much you love Chinese food.

This blog entry is graciously sponsored by Toyota Matrix, check out their website devoted to the best in Asian American film. 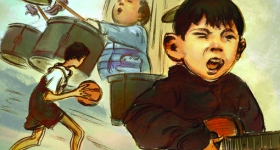 Tillman wrote on Fri, 02/27/2009 - 12:49pm
"Japanese attacked Pearl Harbor and when the Chinese invaded Tibet and threatened Taiwan" ----Please re-read your statement and try and guess why it’s not just asinine, but does not apply to this discussion.RDJ and Murphy’s portrayal were racially insensitive and played on offensive or overblown stereotypes. Whether they are racists themselves is not the issue, they are not from what I’ve observed, but it does not excuse them from this type of humor-I had hoped we would have progressed further that this.“this movie was done before Civil Rights, in another era.” Civil Rights is something that has been an ideal of this country since its inception as outlined in the Declaration of Independence. Even if it wasn’t, it does not excuse this type of stereotype portrayal of a group regardless of who that group is. I agree that this type of portrayal was common “back then” and not limited to Asians but to just about every other group as well. ..btw the Civil Rights movement occurred from 1954-1966; this movie was made in 1961
melissa wrote on Tue, 08/26/2008 - 4:52pm
Maybe he thinks it's affectionate, like how Spanish athletes think pulling back their eyes is affectionate.
Slanty wrote on Tue, 08/26/2008 - 7:41pm
My favorite was when he said he forgives everyone who's been offended by his character.
Yellowface Str... wrote on Thu, 08/28/2008 - 3:55pm
First, Spain's Olympic teams and now Rooney. Will these stupid people -- who offend us Asians -- please stop trying to tell us that what they've done is not offensive? If we tell you we're offended and what you've done is racist, maybe you should just shut the f*ck up, apologize and go away.BTW, I was hoping some Olympians from Asian countries would respond to the squinty-eyed photos by taking a team photo of their own. This one with them using their forefingers and thumb to prop open their eyes -- make their eyes really wide -- to show how asinine the Spaniards are.
huzz wrote on Sat, 03/21/2009 - 1:06pm
Robert Downey Jr. was playing an actor playing a black man. It's not the same thing as Rooney's Mr. Yunioshi. Rooney's character was nothing but comic relief based on racial stereotypes. Downey's character was mocking actors. I think it's edgy, but not offensive any more than it would be if a white actor were to play Rooney playing Mr. Yunioshi in a movie about Rooney, Hepburn, or Breakfast at Tiffany's.
Ben F. wrote on Wed, 02/04/2009 - 11:55am
Well I was offended when the Japanese attacked Pearl Harbor and when the Chinese invaded Tibet and threatened Taiwan. However, that doesn't mean I won't buy a Toyota or Honda or that I won't have Asian friends. Mickey Rooney is a beloved film icon from a long tradition of vaudevillian actors. He wasn't trying to be racist in Breakfast at Tiffany's. He was doing a comedic caricature like Robert Downey Jr. in Tropic Thunder or Eddie Murphy doing an imitation of a white guy on Saturday Night Live. Neither of those actors are called racist. Besides, this movie was done before Civil Rights, in another era. Please don't demonize the kind and talented Mickey Rooney based on one job he did in a career spanning more than 80 years. Mickey Rooney is no more of a racist than Barack Obama.