The problem is, the military officers who carried out the torture, as
well as Bush, Cheney and the other leaders who ordered it, could hide
behind two legal opinions authorizing torture published in 2002, known
as the "Torture Memos." However, it might be possible to go after the author of those memos.

The author of the "Torture Memos" (not to mention an earlier one justifying invasions of privacy) is one John Yoo:
law professor at UC Berkeley, KoreAm 1.5er, Gen Xer (argh! stop this
crazy generation! I want to get off!), former clerk for -- you guessed
it -- Clarence Thomas, douchetastic war crimes apologist, and -- here's
a shocker -- member of the neo-con, libertarian Federalist Society, which seeks to "reform" our legal system towards "individual liberty, traditional values, and the rule of law."

Let's
not beat around the Bush here: Yoo is scum. Sure, he neither gave the
orders nor carried them out, but he knew what he was doing and what it
was for. He lied and fudged his knowledge of the law. He's a top-flight
conservative thinker, who hung his ass out an aperture to please the
Prince and may end up being the only one to get spanked. He deserves it, he deserves it, he deserves it.

Let's keep a sharp eye on the media handling of Yoo. Yoo is scum because he's scum, not
because he's Asian or a durn furriner. His particular brand of crazy
comes from drinking white-American-neocon-made Kool Aid, a drink
preferred by both Bush-voters and many middle-class immigrant families.
The right to be profoundly deluded, mendacious, and hyprocritical is
perhaps the most popular of citizen rights among both native-born and
naturalized citizens. No, the dude is American alright, god help us
all.

And let's make sure that Yoo's prosecution, when/if it
comes, is only the opening salvo in a war to take back our constitution
and the real core values of our country. First we take New Yoo-k, then we take Bush-lin. 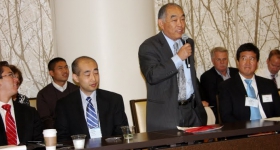 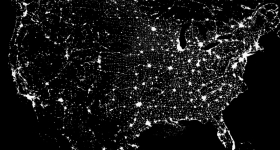 boo wrote on Mon, 02/02/2009 - 10:39pm
has anyone actually taken a class with this guy? i wonder if he says crazy things in class...
claire wrote on Mon, 02/02/2009 - 11:36pm
Here are the courses he teaches:http://www.law.berkeley.edu/php-programs/faculty/facultyCourses.php?facID=235dude teaches constitutional law. how scary is that?
don wrote on Tue, 02/03/2009 - 3:48am
Move the Gitmo prisoners next door to Claire, Chris Matthews of MSNBC, Keith Olbermann of MSNBC and Barbra Streisand.
claire wrote on Tue, 02/03/2009 - 10:07pm
don, i'm not afraid of terrorist suspects being imprisoned in my area and i suspect chris, keith and babs aren't either. what i'm afraid of is losing my rights.you also seem to be misunderstanding the point of holding them at gitmo. it wasn't to keep them away from the rest of us upstanding citizens so we weren't in some sort of nebulous danger. it was to hold them on non-american soil so that they could more easily torture them and otherwise abrogate their rights.
Nina wrote on Wed, 02/04/2009 - 12:32am
Prosecute him!Here's an interesting Japanese perspective on war crimes prosecutions:http://search.japantimes.co.jp/cgi-bin/eo20090125hs.html
don wrote on Wed, 02/04/2009 - 4:39am
I'm a Democrat. I raise taxes on Republicans but I don't pay taxes for me or my illegal immigrant nanny. Only peasants pay taxes. (Charles Rangel, Tim Geitner, Caroline Kennedy, Tom Daschle, Nancy Killefer) Nominate me for Secretary of State.I'm a Democrat. I discriminate against Asian Americans in order to give preferences to Jews, blacks and hispanics (affirmative action). Equality for Asian Americans is for peasants.
Claire Light wrote on Wed, 02/04/2009 - 12:44pm
Don, did you have a point? We prefer direct argument down Hyphen Way, not just sarcasm. Let's have a real debate.
Don wrote on Thu, 02/05/2009 - 11:05am
Non U.S. citizens do not have the same rights as U.S. citizens do. That is how they can arrest illegal immigrants and ship them back to their home countries. Please let Nobama know that your neighborhood is available to house Gitmo detainees.
Claire Light wrote on Fri, 02/06/2009 - 12:21pm
Don, don't be dumb. Nobody said non-citizens have the same rights as US citizens. However, many gitmo detainees weren't captured in the US. To grab them elsewhere and take them to gitmo and then deprive them of the rights that all PEOPLE have in our justice system is wrong.