By now you've seen or are preparing to see the festival darlings that have been garnering praise all year such as Paper Heart, Children of Invention, Fruit Fly, and Karma Calling.

But don't forget about the little guys. Remember, sometimes it's not the size of the reel, it's the...okay, I'll stop now.

AAIFF is offering six short film programs, split up by the following themes:

Films that capture the whimsical, supernatural, and unexpected sides of our fantastical
world.

A journey into the hearts and minds of women who must challenge gender roles in the face of hardship.

Films that expose family members in moments of change and explores the motions of their
growth as well as their dissolution.

Stories of individuals and communities whose identities reveal as much about their environments as they do about themselves.

Home is Where the Heart Is

Immigrants in these shorts reconcile their places in the new world with their foundations in the old.

For Youth by Youth

Filmmakers under the age of 21 provide fresh perspectives in documenting the issues surrounding them.

One of the filmmakers whose short will be screening in the Fun and Fantasy program is Chinese Canadian actor/writer/director Albert M. Chan. His film Fate Scores "explores themes of isolation, connection, and chance, and is a thoughtful look at the seemingly random interactions between ten strangers on a city park bench, eventually culminating into something extraordinary."

Of his project, Chan says "I'm proud to say that ethnic minorities make up about half the cast ... Filmmaking can be such a powerful tool when it comes to changing people's perceptions and the stereotypes they're used to seeing from typical Hollywood fare. As an Asian male actor in North America, instead of portraying a professional (like a lawyer, doctor, or accountant) or yet another gangster, I basically said to myself, 'In this film, I want to be an indie rock musician and I want to get the girl in the end,' and I went out and did just that without having to explain myself to anyone."

Well played, sir. Check out the AAIFF schedule to see when these shorts are playing and buy some tickets already. 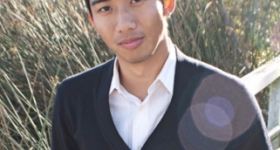