This new play written by Kyoung H. Park and directed by Carlos Armesto tells the story of Ju Yeon, an immigrant living in New York, who has distanced herself from her Korean roots. When a sudden crisis hits her family, she must return to Korea and face her parents and the life she abandoned long ago. More info here.

Midnight on the Mavi Marmara Roundtable

This roundtable will discuss this volume edited by author Mousatafa Bayoumi about the Israeli attack on the Mavi Marmara of the Gaza Freedom Flotilla as it attempted to bring humanitarian relief to Palestinians of Gaza on May 31, 2010. With panelists Moustafa Bayoumi, Noam Chomsky, Max Blumenthal, and Susan Buck-Morss. Moderated by Suheir Hammad. Join the Center for Asian American Media (CAAM) for the official San Jose launch of SFIAAFF, the nation’s largest Asian American film festival. This year marks the 10th anniversary of the Festival sharing the best and brightest of Asian American cinema with San Jose audiences. Kick-off the 29th SFIAAFF in style with film, music, drink specials and prizes! Pick up your festival mini-guide and plan your festival experience. More info here.

How to Talk to Moms & Pops

Say you spend the night at a friend's house? Hide your report card? Sometimes, parents just don’t get it—especially if they came from another country. Writers Ed Lin and S. Mitra Kalita share stories of their parents and the stories they felt they could never tell them. Spend some time away from home and write stories about your own moms and pops. Part of the Asian American Writers' Workshop  LY CEUM: ICE CREAM & IDEAS series for students. The Practice of Poetry: Beau Sia in Dialogue with Suheir Hammad

Join Asian/Pacific/American Institute's Artist-in-Residence Suheir Hammad's interview and dialogue with poet Beau Sia on the practice of myth-making and poems.

NYU Tisch School of the Arts GR2 is hosting Year of the Rabbit, a group art show celebrating the 4709th resetting of the lunar calendar. Pieces will include illustrations, oils, pencils, prints, watercolors, sculpture, and other media–all dedicated to one of the most stubborn, but also most creative (and cute) animals in the Chinese zodiac. Preview images available on Flickr. Wednesdays through Saturdays at 8 pm

Poet and educator Ruby Veridiano is working on a project with Urban Word NYC and Nickelodeon. They are recruiting APIA youth poets based in NYC from the ages of 10-17 to participate in Nickelodeon’s Asian Heritage Month PSA. This is a paid opportunity, and selected poets will be aired on National Television to speak about prominent Asian American historical figures of past and present. If interested, contact Ruby Veridiano, at rmveridiano [at] gmail.com (rmveridiano(at)gmail(dot)com). 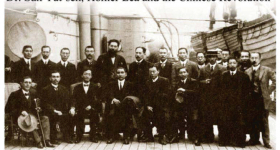 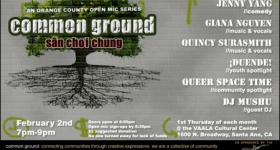