This subject gets rehashed every few months, and this article in Marie Claire magazine by Ying Chu doesn't add much to the discussion

The article just seems to point out that a number of rich and powerful white men are married to Asian women, so therefore, they are trophy wives. Woody Allen and Soon Yi-Previn have been together forever, so there's nothing new to report here.

There's been some chatter about this on Twitter and at 8Asians, The Frisky and YouOffendMeYouOffendMyFamily, but no comments on the Marie Claire site, surprisingly.

I didn't really see the point of this article. But maybe my eyes just glaze over now when this subject is raised. 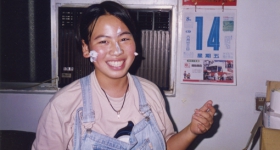 Christine wrote on Thu, 08/13/2009 - 4:01pm
Thank you for putting this article to our attention. You're right...there really isn't any point to it except perhaps to incite tired, cheap controversy and, for the author to indulge in his/her misconceptions on the matter.
lanlian wrote on Thu, 08/13/2009 - 5:35pm
jezebel wrote about it too.
Alpha Asian wrote on Fri, 08/14/2009 - 8:08am
Sucks to be a cliche, doesn't it?
dwbl wrote on Thu, 11/05/2009 - 1:12am
@dt, that's a good point. reverse trophy-ing. so that means you're pointing out the "patriarchal power" point of view, ON TOP OF the racial. hah.and i usually use dt but i'll let you on this one.
Reflective SAM wrote on Sat, 08/22/2009 - 3:08am
My thoughts:A friend of mine, who happens to be Asian American, posted this on Facebook and it spawned even more comments! She loathed being the object of a fetish, and thought it was creepy. I know that this is a form of racism, but I find it a bit petty because some Asian women benefit from it, and even play along with it. Sure this fetish probably attracts some really clueless morons, but I'm sure there are a few nice white guys who have always had a bit of curiosity towards Asian women and culture. Maybe he got it from watching Karate Kid II. Anyways, boy meets girl due to fetish, boy and girl actually fall in love, and they happily live every after. Even if the guy's original intentions were a bit shady, maybe in the end he matures and sees princess from the East for who she is, no? I know TONS of white guys who have married Japanese wives. Why? Why go through all the trouble of going to Japan, learning a very difficult language, and hooking up with an Asian girl? Why not just marry Mary Anne from the back hills? Because some people just like something different is why. Most people may love their iPods, but there are a few renegades who love their Zunes. What I told my friend was that though a lesser evil doesn't make it right, at least these girls are actually objects of desire, you know? In contrast, Asian American guys have been ridiculed by American white culture, often portrayed as nerdy, unattractive comedy relief, or just mute kung fu heroes. We've been made fun of for our accents, portrayed with buck teeth and squinty eyes, and told we have small penises...over and over and over and over. Asian American guys have suffered quite a lot through this, more so than these Asian ladies who are complaining about this article. But, I ain't complaining, and we are resilient and will get our American Pie damnit! :) Racism does exist, and so long as people use their brains, they will categorize, compare, and differentiate. They will naturally have racist tendencies. What you all don't realize is that racism is natural, and you all do it. A lot of these angry people act like they've never had a racist thought in their head, but you just haven't analyzed your minds carefully enough. It's baked in. And, being Asian American, I know that Asians can be some of the most racist people around. Reflective SAM on singleasianmale(dot)com
dt wrote on Sat, 09/05/2009 - 7:07pm
I think this claim may be true, but it also may be true that these asian women are just as guilty as using these men as trophy husbands, or status symbols.