A drag superstar finds his, and her, confidence

Raja Gemini sewed, danced, cat-walked and lip-synced her way to victory on season three of Logo TV’s RuPaul’s Drag Race — beating out 12 other fierce and fabulous contenders on the drag-queen competition show in 2011.

Born Sutan Amrull, the 39-year-old Los Angeles native had already made his name in Hollywood as both a makeup artist for celebrity clients like Tyra Banks and Adam Lambert as well as a renowned L.A. drag performer before the drag legend RuPaul crowned him the queen with the most charisma, uniqueness, nerve and talent.

Since then, the Dutch-Indonesian chameleon has headlined drag shows at clubs across the country, while working on followups to his first pop single, “Diamond Crowned Queen” and blogging at artofraja.com.

Raja recently chatted with Hyphen about sex, drag and what it’s like to be your own power couple.

How did you learn about the birds and the bees?

I don’t think my parents and I ever really had the birds and the bees talk. I basically learned it all on my own. I was very aware of sexuality at a very young age and was curious about it. There was a book that my parents owned — I don’t remember what it was called, just that it was written in the ’60s about sexuality, and it described all the medical and technical terms.

I learned about the structure of a penis and vagina, but I didn’t really know what those things meant. I knew that semen came out and babies were made! There were all these Latin terms like coitus and coitus interuptus. You talk to your friends, and I think that’s really how kids learn.

How did you feel about all of that?

I was always a little bit fearful because I didn’t really want to do this with a girl. I just kind of avoided it. I pretended that it didn’t exist, and I focused on being crazy and kooky and dressing cool and going out to clubs — it was a really big distraction from the insecurities I had about sexuality.

I’m a late bloomer; I didn’t even kiss a boy or a girl until I was in college, and I was about 19. And I actually didn’t lose my complete virginity until I was 22 or 23. It was never a really big priority for me to have sex, but once I lost my virginity, it all changed! (Laughs)

When did you know that you were gay?

I think I’ve known all of my life. I never looked at girls sexually or as being something that I would desire sexually. The girls that I had crushes on in high school were usually the most stylish girls in school or the coolest, most rebellious girls. Those were the ones I really liked because I wanted to be that. I wanted to be a powerful girl who didn’t care and got to wear whatever she wanted and was cool.

In the season 3 finale of RuPaul’s Drag Race, you said, “For the first time in my life, I can say I’m a beautiful person. It’s taken a long time, and it’s been a treacherous journey.” Tell me a little bit about that journey.

I started out in a very religious household and that kind of stifled me. And I went through a lot of bullying in high school. But, there was no stopping me; I dressed the way I wanted to, and I got a lot of harassment in school. Then, when I discovered drag, I just jumped right into it. It was exactly what I needed. I focused my entire life, really, around that image. And I focused more on the feminine than the masculine.

But I made a lot of sacrifices. I got into some relationships with men who only loved me because I was a beautiful woman. And there were guys who wouldn’t date me because I was too effeminate as a male. I walked around with really long hair, tall and thin, and I just kind of looked like this marginal gender every day because I felt like I was living for the drag.

Now, I’m getting older, and I’m embracing the fact that I have this masculine side of me — that’s how I got to the point I am at today. It’s finally realizing who you are as a person and I think [the show] actually helped a lot of people understand that you don’t have to be just a pageant queen, you don’t have to follow any sort of template. You can make it individual and make it all your own.

How do you balance your two personas?

It’s really about how I pack my luggage! I usually travel with one pair of black jeans, one pair of blue jeans, some T-shirts, but Raja gets to have the dresses and the coat and jewelry and the shoe options. Sutan doesn’t really get to do that.

I am a Gemini, so there’s a duality to me. When I’m feeling like I want to be in the public eye and I want to be around a bunch of people screaming at me and having a good time and partying, that’s where Raja comes in. In my actual day-to-day life, I like to be alone. I paint and I draw and I’m starting a blog now — I do a lot of things on my own. I sew, I hang out with friends. It’s actually very simple. So there is that side of me, but again, it is all one person.

I feel fearless, and I think that’s pretty sexy. That confidence has only come over time. It’s come out of wisdom and experience — it’s not anything I’ve had before. I definitely feel a lot sexier now that I’m older and in my 30s.

You have to believe that you are hot. I think that’s what drag queens have represented over thousands of years. It just has everything to do with you being a free human being, using full expression, constantly.

Lauren Kawana is a student at the UC Berkeley Graduate School of Journalism.

Read more in Issue 27: The Sex Issue, available now. Subscribe to Hyphen or pick up a copy at a newsstand near you. 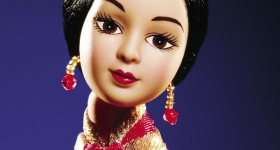 Melissa wrote on Thu, 06/20/2013 - 10:43pm
Suntan/Raja I can't wait to see you in Seattle at the New Legally Wed Game show! I enjoyed watching you on drag race & was so happy when you won. My friend & I will be in your audience tomorrow & we are really looking forward to it. We are fierce Glamberts but don't let that scare you LOL! You are very creative and I think both Raja & Sutan are very attractive. See you in Seattle!