Sure, Don Cheadle presented and Tracy Morgan gave the most entertaining speech of the night, and Viola Davis was nominated for best supporting actress for her role in Doubt, and P. Diddy was nominated for his role in A Raisin in the Sun,
and there were lots of shots of Beyonce and Jay Z, but the lack of
diversity just always makes me cringe. I love Kate Winslet and am super
excited to see both The Reader and Revolutionary Road (btw, the book by Richard Yates
is a must-read), but do the only strong roles written for women have
to be period pieces in films where people of color are non-existent?
And back to the Asian Americans ... I don't even know what to say. The
only one I saw was Mindy Kaling from The Office. Was there anyone else?

Anyway,
the real point of this blog entry was to not get mired in my
non-diverse Hollywood vitriol. [We all know that the only way to fight
it is to write screenplays, go to film school and bombard the
establishment with our stories. So, get to it!]

What I really wanted to tell you about is Suutra,
an amazing women's fashion line that works with handicraft artisans
from the Gujurat region of India. I made it to a trunk show a few weeks
ago at director Mona Shah's house in Oakland and thought the line had a
perfect balance of Western lines and Eastern details. I wanted both a
simple, black puffy-sleeved cropped jacket (that would be perfect to
dress up jeans) and a more traditional red blouse with embroidery work
at the sleeves and collar -- and everything in-between. Check out
collections here. 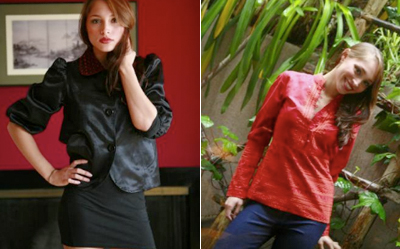 Creative Director Avni Jamdar told me about her partnership with the
cooperative Self-Employed Women's Association (SEWA) in Gujurat, where
she travels twice a year to work with artisans. The Suutra website has
some great videos profiling some of the women they work with.

It's dope to see real fair-trade fashion lines like this one with
clothes that you would totally wear. And now that India is the new
black (again) thanks to Slumdog Millionaire, there's no better time like now to outfit yourself.

mohammed imthiyaz wrote on Tue, 01/13/2009 - 10:11pm
it is a very good movie
RELAX wrote on Wed, 01/14/2009 - 7:40am
I think Independent filmakers on the international level need to come together and create their own award show, hollywood will never change.
Anne Zinta wrote on Sat, 01/24/2009 - 11:47am
To be honest....Slumdog Millionaire Sucks.....no depiction of truth...even if it is made docu type...yep it sucks big time....only darker side of mumbai is shown and in fact muslim women and men get too much freedom in India that is even not possible in pakistan as well as middle-east countries. The undying and lively spirit of Mumbai should also been shown. And yes this is recorded:It is only city in the world that after going through series of blasts since 1991 (of course conducted by muslim terrorists) still has peaceful ambience (because Hindus & Christains of Mumbai never strongly reacted). This element of tolerance was absent in the movie which makes it void in loss of facts.
G wrote on Mon, 01/26/2009 - 3:14am
While it is nice to see a movie based in India that doesn’t make it a great film.The film is just a slightly above mediocre Hollywood movie that has Indian actors instead of Americans.The film is ultra predictable, cheesy, and the characters are shallow.Why does he fall in love with her? There is no real chemistry between the characters. The audience is given no reason to believe there is any connection there. Why does he like her? She is hot? That is it.The good looking people get together and get rich, the bad and not as pretty people lose, die, get shot, The End. How many films are like this? Like a million…This is style (cute kids, great scenery in the movie) over substance.
ketan waghmare wrote on Sun, 02/01/2009 - 9:43pm
I dint think it was such a interesting film.Full of coincidences even rajnikany wud blush away !!how come all the bad thngs in the entire world happpens to the protagonist who doesnt even look indian. The child actors are flawless . the roles played by anil and irfan are guest appearances . the way they were dancing in the premier i felt that they are the slumdogs. i hate the concept and specially the scene where the american couple gives 100 bucks to the guy and tells him " this is real america"i enjoye it as one of the most comic scene it sure deserves oscar for comedy !! the movies is full on bore and just bcos of the fact some silly psudo intellectual loved the conept of taking a dip in the holy shit u shud go watch it !!Tourism Ministry of Indiaki Jai Hoooooo !!!!! "