Slumdog composer A.R. Rahman snagged two of the three nominations for Best Original Song for "O Saya" — a shared nomination with M.I.A — and "Jai Ho" which was featured in the crowd-pleasing dance number during the film's closing credits:


As always, Asian/American filmmakers are top contenders in the documentary categories. Steven Okazaki earns his fourth Oscar nomination for The Conscience of Nhem En which explores the life of a teen photographer assigned to the Tuol Sleng Prison in 1970s Cambodia, while Thavisouk Phrasavath and Ellen Kuras' The Betrayal (Nerakhoon) is up for Best Documentary Feature:


And let us not forget, the crowning achievement in Asian American cinema this past year: Kung Fu Panda, nominated for Best Animated Feature. 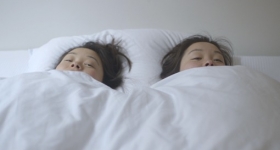 InfoMofo wrote on Thu, 01/22/2009 - 1:18pm
Wait, are we not supposed to like Kung Fu Panda? Cause I kinda did. Is it one of those things asian people are supposed to be offended by, like the word "oriental", which I never got on board with?
Sylvie wrote on Thu, 01/22/2009 - 1:24pm
Don't worry, InfoMofo, we have not blacklisted Kung Fu Panda.I added it as a joke because when thinking about Asian American films from 2008 (or lack thereof), I could just imagine someone saying, "Hey, but what about Kung Fu Panda?" If you enjoyed it, then it's all good.There is no way it's beating Wall-E, though.
giles wrote on Thu, 01/22/2009 - 7:33pm
wall-e's the better flick, but i dug kung fu panda too.but that point reminds me of that mcdonald's site: i-am-asian.com. when it first launched like 6 years ago or so, they had these pictures of asian folks eating mcdonalds that would rotate through, and one of the pictures was a chinese sharpei - yes, a freaking dog. and i remember thinking like they probably didn't have enough asians so they were like "let's use an asian breed of dog. that counts as asian american..."