Sunday Will Come takes that cliché and turns it on its ear ... or rather, follows it out to its logical conclusion. Living in a fishbowl isn't just about feeling watched, or even feeling trapped. It's more an existential state, being controlled from outside, like pet fish, yet alone and helpless in illness and death.

The interdisciplinary performance alternately depicts a pair of aquarium fish, one of whom is dying, and the couple that owns the fish trying to decide what to do about it. The fish scenes are beautiful, using only dance and movement to show the labored breathing and flopping around of the dying fish, and the attempts of the healthy fish to support and assist. The scenes between the human couple rely on absurdist dialogue and metafictional studies of how to produce a performance piece. Interspersed throughout are songs and monologues from a chorus-like figure that mostly stalks the stage's literal border.

*Sigh* Okay, see? impossible to describe. Because what I described above sounds at best grisly, and at worst self indulgent and boring. But it is neither.

Produced from the ground up by San Francisco's oldest arts nonprofit, Intersection for the Arts, this piece is part of a larger project, The Future Project, which imagines the future broadly -- the future of the world, the future of theater, the future of whatever. It is a collaboration between Intersection's two resident performance companies: the theater company Campo Santo, directed and represented here by Sean San Jose, and the dance company Erica Shuch Performance Project, led and represented here by Erica Chong Shuch. The text is developed/adapted from texts by such Intersection collaborators as Daniel Alarcón, Philip Kan Gotanda, and Octavio Solis. Thrown into the mix is singer/songwriter/rapper Denizen Kane (Dennis Kim, formerly of I Was Born With Two Tongues), who performs his own songs and monologues as the Chorus.

The lineup of collaborators has as high (and Asian American) a pedigree as you can get in this circle San Francisco arts, but the show's success depends more on the energy of San Jose's and Shuch's performance. Ultimately, all of the best art is about the sheer joy of creative innovation. When that joy is present, there's no masking it. So any description of this piece will inevitably fall short: make it sound like something dry, incomprehensible, and existentialist, when it is actually an entertainment of a particularly high order.

Okay, that's all I'm going to say. Go see it if you're in the San Francisco Bay Area any time until November 7. Thursday performances are "pay what you can." Go see it. 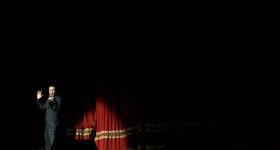 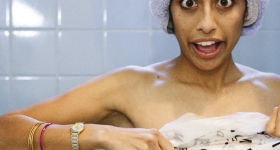