D'Lo talks about 'Minor D'Tales' at the Brava Theater SF

What is your show about, and what got you to this point,
to create something this ambitious?

This particular solo show, called Minor D’Tales, present
excerpts from one of my larger pieces.

The show touches on everything, and the characters deal
with a lot. It is all comedically done. But it touches on serious topics that
we don’t get to openly talk about. I
can’t get away from comedy. That is my primary mode. The wonderful thing about
these characters, is that they possess so many inner contradictions.

Who are the characters you inhabit and present in Minor
D’Tales?

What role does your standup comedy play in Minor D’Tales?

A lot of people know me only for stand up. I do the
university college circuit only as a stand up and some solo theater. So, I’m
out there as a comedic person, but this is a set show, this is theater, this is
what I go and do regional theater with. It’s a whole different crowd that
usually sees this. I am really happy and excited to be showing this work.

How do you feel about presenting here at the glorious
Brava Theater in San Francisco?

I want to come with my best, especially because since
this is Brava theater. The people who work at Brava raise the stakes for you to
come with your best, because that is the way for you to show your appreciation
and respect.

In your prior work you present a character that emulates
Mahatma Gandhi. How do you tackle the mythology and saintliness that surrounds
him in your work? In much of my work, I try to pull on characters that
resonate with the audience. The Gandhi I present in my older work is not
actually Gandhi, he is more neo-Gandhi. He is most based on my father and my
uncle. He comes with the politic of peace and non-violence, but he has grown up
only with violence. When you have somebody like Mahatma Gandhi, who is read as
being so holy, so down for the people, it can take away from the fact that he
was a real human being. He possessed a lot of contradictions, and he also had a
lot of fucked up shit, as with all of our great leaders.

What I am trying to
discuss is that if we keep trying to emulate and keep these people on a
pedestal, we are never going to understand the leader in ourselves. Because we
think we are not perfect like they are. We have to expose the truth and
realities of these leaders. Of course we can have people in power and we do
need leaders, but we have to accept them for their contradictions, and question
them while they are in our presence. I’m not saying we need to stop them from
their work, but we should constantly be behind them, and question them on how
they are getting things done. So, in that way, the Gandhi based character in my
show is very wise, because he comes from a legacy of understanding violence,
but he doesn’t care what others think.
He drinks, he smokes, and he talks crassly, but he also has this love
for his granddaughter who had to give this eulogy over her friend who died. He
accepts everyone for who they are, he looks at them funny, but loves them for
who they are.

In my show, I tend to have these people who seem super
fucking holy, but who are saying the most whack shit. All of these characters
are drawn upon my real life. For example, I present this clairvoyant character who is trying
to tell me that all spirits have a gender. What book or religion is that even
true? She is telling me that I have to change, that it was my karmic path to be
born into a female body, but I am really a male. The pieces that I write are
about reclaiming your spot at the community table. I am not just saying I
belong at the table, but I am actually supposed to be running shit. Not in a
cocky bastard way, but in a self reliant way. When you put down the people who
are supposed to be at the table, then you are denying your community growth. The show also talks about spiritual places for gay and
queer people, as well as the gatekeepers, the people who are supposed to
meditate on the role of relationships on this planet, and them telling us how
it should be. There is no attachment to being tied into a typically male role
or female role. I am discussing that this is what we are doing wrong.

You travel extensively presenting your ideas on gender
and identity through characters and stand up. Is it challenging facing so many
diverse audiences? People gravitate towards the goofiness in the way that
these subject matters are presented.It is always a challenge, because I see my performances
as a way for me to be an infiltrator. In the Bay Area, there has been such a huge conversation
that has been scholarly and academic around gender and sexuality, but the
characters I present are so far from that academic world, that it provides
something else, another layer to deconstruct. Performing in character is the only medicine I know to
give. It may not be much, but if I know this is what I got to give, why not
keep dishing it out?

Minor D’Tales is part of a series of works from local writers: the

Me, Myself and I series, running November 19 through December 3. The series boasts D'Lo as the featured performer, but also several rotating works from local writers. On Saturday, D'Lo's Minor D'Tales will be paired with Bare Knuckle by Anthem Salgado. Does Anthem's name seem familiar? That's because he was a Mr. Hyphen contestant in 2007.

Get more info and tickets here. 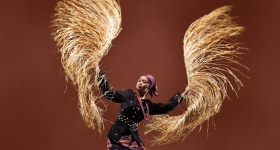 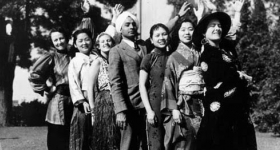