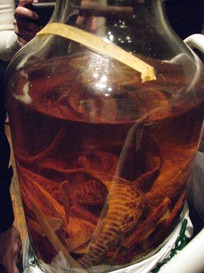 Tamio took the time to sit down with me after he returned from Canton,
where he snagged me some video
of a vendor making snake wine at the market. By this time,
I had already learned a little about his snake wine: Tamio brewed the wine with snakes
that originally belonged to the family of his friend Ed. It's a real commitment to preserve
snake wine. But Tamio feels like taking it on, even though it's not part of his heritage. He considers it a way to share something culturally significant with his close friend Ed.

Why did you start brewing your own snake wine?
When
I go to China, the people that I am with are really classic Cantonese
eaters. Invariably, you come across a lot of infused alcohols... So,
when I talked to my friend Ed about this, he told me that his family
had this jug of stuff that has been around for a really long time -- 38 years. And his mother was prepared to throw it out. So my
first thought was, "Don't throw it out, my friends in China would
appreciate it. I'll figure out a way to take it to China." And then I
thought, one, that would it be logistically difficult. And, two, we
should be doing this!

Were you concerned that 30 years was too long for a snake to still be any good?
No.
Nobody in China questions that. It didn't even occur to me to question
that. I assumed that made it more valuable. Nobody has told me that it
is or it isn't. But, every time I tell somebody that I have these old
snakes, they're pretty impressed. So, I guess that was the right thing
to do.

Do your snakes have heads?
Yes.

They're a female and a male?
Yes. I think it's a ying-yang thing.

Wow. It's really yellow. And super sweet.
This
is really good. The first time I had snake wine with these people [in
China], they said that I should have some Chinese white wine. And on
the bottle, there's like a wheat leaf. And, I'm asking," what kind of
grape is this?" [laughs] I don't know how it goes in Cantonese, but in
Mandarin, the word for white and the word for clear is the same word. And the word for clear spirits and distilled alcohol is generally translated as wine. So, this is considered white wine.

You travel to China pretty often, right?
Six or seven times a year, to Canton.

So, in comparison, this is something common.
It's everywhere, every traditional Cantonese restaurant. They'll ladle it into a small pitcher and serve it to
you that way. The alcohol is consumed in very small shots, constantly throughout the meal. 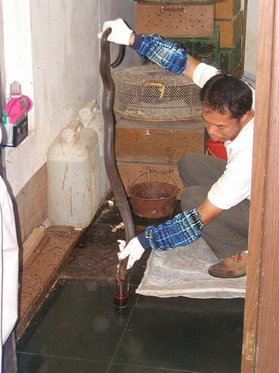 NOTE: Tamio was trying to be polite here. I think it's because he knows my dad. Everyone tells me it's really great
for virility. Ha!

I even found some pictures from 2002 of snake blood.

What do you do with snake blood?
You drink it.

Just, straight?
Yeah,
pretty much. I can't remember if we mixed it with wine but I don't
think so. So, in 2002 they served us the blood which is mind-altering.
We drove
back [from the restaurant] and it was a two-hour drive. It's like
you're wide awake, and your mind is racing and you're thinking very
clearly... It's like you're on cocaine. You think you're figuring
everything out...

Another big treat is...the gallbladder. They
extract it. And its filled with all
this green bile. They snip it with a [pair of] scissors and drop it into a glass
of wine and it turns the wine bright green. It's considered very
healthy.

Do you feel like you're doing something important by maintaining these snakes?
Yeah.
I feel some responsibility. It's a legacy. It's not my legacy, it's
Ed's legacy. For him [Ed's father] to do this, and to keep it past his
life, takes a lot of patience. It's a big investment. The idea that
what's in that jar can be here for another 30 years is really
weird. I don't know if I can last 30 years.

I wouldn't have opened it [that night] if Ed wasn't here. And, I was
in a situation with all these people around. As far as I'm concerned,
the fewer people that see it, the better. I'm not doing this as a
bizarre food thing. 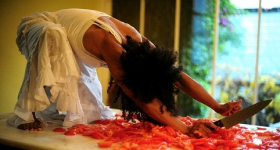