Too bad M.I.A. is no longer pregnant; her appearance during the best original song medley would have added much excitement to an otherwise meh Oscar night, in my opinion. Hugh Jackman is lovely to look at, but will someone please ask Tina Fey to host next year? Or any comedian, for that matter.

At moments the ceremony was touching (the acceptance of Heath Ledger's best supporting actor Oscar by his family), empowering (the call for marriage equality by Milk winners Dustin Lance Black and Sean Penn), and a bit like a group therapy session (the personalized praise given to each acting nominee by former Oscar winners). I was glad to see the kids from Slumdog hop on stage at the end of the night, though part of me made me wonder if it was in response to speculation that the children were not compensated adequately for their acting work in the film.

Asian American presence was limited to High School Musical's Vanessa Hudgens during the tribute to every single musical ever made, along with host Hugh Jackman, Beyonce, Zac Efron, and Mamma Mia's Amanda Seyfried and Dominic Cooper. Sad, but true.

Let's see if 2009 brings about a few more faces of color, behind and in front of the camera. If the dearth of Asian Americans at this year's ceremony has you down, remember that the San Francisco International Asian American Film Festival is upon us! Check back soon for film reviews and other announcements about upcoming events. 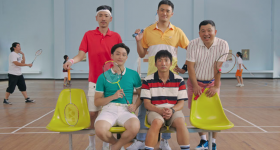 momo wrote on Mon, 02/23/2009 - 9:57am
i also liked Penelope Cruz's (though i've actually never watched any of her films!) bit about supporting the arts and her few phrases in Spanish.
momo wrote on Tue, 02/24/2009 - 11:54am
also, read Samhita Mukhopadhyay's take on Slumdog Millionaire at feministing.com: http://www.feministing.com/archives/013870.html