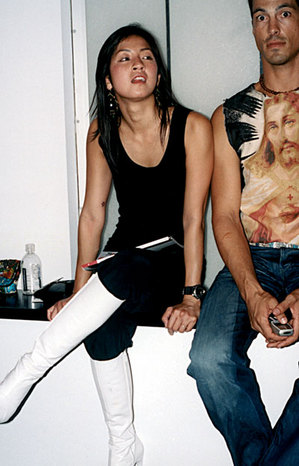 In light of recent events, the white elephant in the room, the great scourge of postmodern society, can finally be addressed. Yes, I'm talking about Asian hipsters. What gives, man?

Browsing around the Vice website (maven of hipster culture), one could definitely argue there is something going on in their dreaded "Do's and Don'ts" section. Don't believe me? Well I hope you like to be proven wrong. Repeatedly.

Call me a conspiracy theorist, but someone at Vice seems to like his yellow along with his second-hand fishnet jean jacket.

The whole hipster culture revolves around irony and a sort of post modern decoupling of symbols and meaning. Hence, they can wear a Mickey Mouse t-shirt while still arguing they are subverting the Disney megacorp. But it can be problematic to claim that symbols have no meaning, or at least can be easily decoupled from their given meaning. So just because you claim to have intentions of meaning to the contrary, actions and words can still carry racial weight.

As someone who happens to find himself often in San Francisco's Mission
District with members of the hipster subculture (I myself cannot be
one, as commenting on hipsters automatically disqualifies you from the
club), I have often noticed an extension of the mainstream racial
dichotomy in the subculture. Namely, I find that Asian hipster girls
are still sexualized, commodified and, dare I say it, "cutiefied."
Meanwhile, hipster Asian guys are relegated to the quirky nerd role
which, admittedly, in classic hipster style, many of them embrace.

Just as Levi's released the 511 super-skinny jean to go with the times, could it be that the hipster subculture has developed its own iteration of racism, perhaps masqueraded as something ironic in a strange sort of meta-way? It makes sense that, as an outgrowth of mainstream sensibilities and by definition borrowing heavily from mainstream symbols, hipsterdom could include old racist attitudes, repackaged and rebranded as they may be.

But hipster racism (indeed hipster sexism) isn't just a rebranding of old racial paradigms. It is a new, novel form of racism that, at worst, could possibly be resistant to critique because of the inherently blase nature of the subculture. Try to talk to an hipster about race, and you would likely get a nicely packaged race apology or perhaps a vacant stare and some kind of truism about how we're all one race.

I myself cannot be one, as commenting on hipsters automatically disqualifies you from the club

sheath that tongue, mic, before you cut yourself with it.it could be simpler--and less insidious--than you think: it could just be hipster guys trying to broaden their sexual playing field.and in SF it could just be that a third of the population (and probably more than that among under-30s) is asian.hipsters are not brave people, they're trendy people, and they need their trends reflected back at them to stabilize their coolness. if there aren't enough white hipsters around to do the job, asians are exotic and cool looking. take them.
mike2cents wrote on Sun, 04/19/2009 - 3:13pm
Having spent my 20s in the East Village and Williamsburg, NY, I can give a first-hand account to this cultural phenom. It's not new. The racism that comes along with the hipster who dates only Asians is as old as GI's in the South Pacific. I am not saying in any way that all mixed couples should be banned, but I have known a few dudes in my time who have had no problem confiding into me that they only date Asian girls. It's fetishism like any -- feet, plushies, diapers, etc. Unfortunately, you are right in saying we aren't really able to have a real dialogue about this because the "hipster" is assumed to be self-aware and progressive.
Catherine wrote on Sun, 04/19/2009 - 3:20pm
You are so right. You forgot this one though: "A lot of nerds are into Asian girls because they’re less demanding, but Jesus Christ ladies, can we at least pretend you two weren’t brought together by laziness?"Vice is gross.
tc wrote on Sun, 04/19/2009 - 3:25pm
I think Asian-Americans can and should do with a little irony. A little dose of ironic privilege can be healthy no? Why are we so serious with our actions? Take for example...recently a certain Texas lawmaker was bombarded with "serious" phone calls and serious e-mails regarding her suggestion that we adopt more "American" sounding names.There was little coverage of a handful of us who called her office and said, "My name is (insert name here). Now...what's my name? SAY MY NAME! SAY MY NAME BITCH!"Not to say that that kind of activism is effective or superior....or that the matter wasn't itself "serious." But aren't we supposed to be a diverse bunch? A diverse bunch that would also subvert a paradigm?
aZnHeartThrob wrote on Mon, 04/20/2009 - 3:22pm
There definitely is a theme when Asian Americans are included in the infamous Do's/Don't list. We wrote about it a few months ago before the Asian Grifter story broke. We found three categories of photos when it came to Asian Americans on the list:1. Cute Asian Girls (pretty obvious the writers are privileged white guys with AzN fetishes)2. Asian Girl with a white guy at a sweaty warehouse party3. Asian guy in an embarrassing/nerdy moment or Super-Uber-Hipsterhttp://bicoastalbitchin.wordpress.com/2009/03/27/vice-magazines-dos-and-dont-asian-cutterz/
aZnHeartThrob wrote on Mon, 04/20/2009 - 3:23pm
Oh. And hipster always love talking about how they're not hipsters...
jho wrote on Mon, 04/20/2009 - 4:32pm
I saw this chick wearing tights. I thought he was a hipster.
AE Trinh wrote on Wed, 04/22/2009 - 4:09pm
Stereotypes they may be (yellow fever, hipster, etc.) but complicity with the opinions villainizing these trends is not the answer.Stereotypes will be around forever, and every culture has them: from the gold-toothed, dope-dealing brothers in Harlem to the cousin-marrying, trailer-trash crackers in Mississippi.Lotus Blossom, Dragon Lady, China Doll...any guy who has spent time with an Asian woman knows better than to refer to her in these terms. Any Asian woman who is approached by a guy who doesn’t know better ought to school him of the facts, or one day he may get a slap in the face or a kick in the crotch--kung-fu style or otherwise--for saying something as obnoxious as, “Me love you long time.”Despite the lingering high-flying kicks and exotic femme fatales, the underlying strength and intelligence behind these clichés are empowering nonetheless.I would never snub being characterized as able to bring a six-foot goon to the ground with a stiletto to the trachea as easily as a six-foot Casanova to his knees with a wink of a kohl-lined eye.Stereotypes they may be, but complicity with the opinions villainizing these traits was not the answer. Embracing these images would be the key to acceptance and admiration.
The Great Ronoldo wrote on Wed, 04/22/2009 - 7:15pm
Mic, you could not be more confused and, frankly, silly... PBR is not a good beer; nobody likes that garbage.
Sunny wrote on Fri, 04/24/2009 - 10:06am
By PBR, do you mean Professional Bull Riders? b/c I get a lot of slack for being Asian and going to rodeos. (BTW I do NOT get harrassed or ignored when I'm there. Other fans love the enthusiasm I share with them!!) July 4 is apple pie, bull riding and fireworks... and I like ALL of them.
kerbot2000 wrote on Sat, 04/25/2009 - 5:22pm
people, please. the correct term is "yipster."
Asian Mama wrote on Thu, 10/01/2009 - 12:41pm
We can't help it if we're fly. Recognize.
Swann wrote on Wed, 04/29/2009 - 10:14pm
"The whole hipster culture revolves around irony and a sort of post modern decoupling of symbols and meaning. Hence, they can wear a Mickey Mouse t-shirt while still arguing they are subverting the Disney megacorp."Are you serious??!!Maybe they are just pretentious fashion/trend hounds trying to be...."hip" and enjoying the fact that you've legitimized this type of BS by ascribing to it a 'philosophy'.Sometinmes a cigar is just a cigar and BS is just BS.Plus is it any more 'bogus' for Azn girls to be draped around hipster dude than for pseudo-black Sunnyvale-raised Azn 'bros' to be dap tapping and yo yo-ing like they 'down wit da cause' and what not?Seriously.