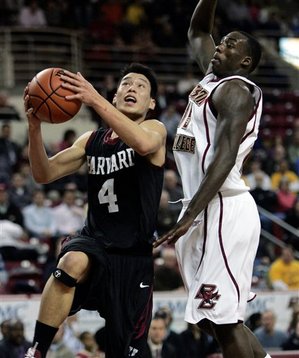 Yesterday Time Magazine picked up on Jeremy Lin's story, and the Washington Times covered him recently as well. In the Times article Lin drew praise from college coaching legends like Jim Calhoun and John Thompson, who said,

"There are a lot of teams that come through here," Calhoun said. "I can't think of a team that he wouldn't play for."... "He's spent the last four years proving that he can play with anyone in the country," Thompson said. "He's terrific, and it's not just his scoring. He does everything well. He's extremely unselfish. It seems like he's always involved in every play -- whether it's an assist, a rebound, a deflection, a stop, whatever."

I went to see Lin play last week, and felt proud not only to see an Asian American play so well in a sport where the sight is such a rarity, but also to see the way he conducts himself on and off the court.

Lin has a very team-oriented approach as a player and as Harvard's captain. During the player introductions broadcast through the arena, in which Harvard introduced Lin last (conventional for any home team's star player), Lin skipped his own individual introduction and instead started a team pre-game huddle. He was the best player on either team, not just dominating the game statistically, but playing with artistic and entertaining athleticism: eye-popping blocks, steals, drives, and points-after-rebounds, all with ease. As the team's best defender, he also guarded the opposing team's power forward and center for over half the game. He showed all facets of his all-around game.

I think Lin has a very unselfish, blue-collar style of play on the court. During much of the game (especially early on) he kept feeding his teammates the ball, diving for balls or rebounds, and took tough shots when the shot clock was winding down to bail the team out. Based on his solid fundamentals and the ease with which he scores, I believe he could probably average 10 more points per game with little or no drop in his excellent shooting percentage if he wanted to. His game is unselfish like Steve Nash, but I think his NBA draft stock would possibly improve if he had a more Allen Iverson or Kobe Bryant-like shooting mentality.

The crowd was a mix of fans of all types, and their reactions during the game were pretty similar. Most did not particularly notice Lin during the introductions or early on in the game because of Lin's own unassuming and low-key demeanor, but with every spectacular play he made on the court, I noticed fans looking Lin up in their programs, and publicly admiring his talent. By the time his coach sat Lin down near the end of the game for good, fans from both teams were applauding his performance.

If Harvard wins the Ivy League title over Cornell this year, they will be in the March Madness Tournament. For fans of Jeremy Lin who live in the Bay Area, Lin and Harvard will be playing the Santa Clara Broncos this Monday, January 4th, at 7 pm (see the Hyphenite below for details). The Dream League is organizing groups of fans to come and support Lin as he returns to the Bay Area to play in front of his hometown fans. Come check him out if you have the chance! 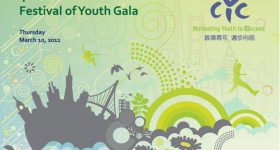 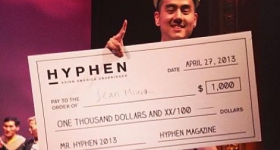 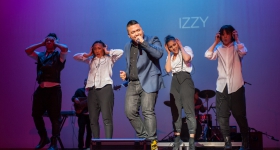 IvyBBn wrote on Sun, 01/03/2010 - 8:55pm
Please drop by my Ivy Basketball fan site, http://www.ivybbn.com, now and then. It simply aggregates Ivy basketball headlines, but the Jeremy Lin posts are by far the most popular and I have frequent visitors from Taiwan; I'm thinking I might as well just set up a Jeremy Lin section on the site.
TKim wrote on Mon, 01/04/2010 - 2:18pm
Luke Ridnour played in college for Oregon, was drafted by the NBA in 2003 in the 1st round #14 overall, and ended up as the starting PG for the Seattle Supersonics for a few seasons. His college ppg and asst stats are comparable to Lin's, but Lin's steal, block, and rebounding numbers are better, and Oregon's college schedule typically doesn't play many elite opponents (like Harvard): http://www.basketball-reference.com/players/r/ridnolu01.html Here is a recent article comparing the prolific but obscure careers of Steven Nash and Jeremy Lin in HS and in college, passed over because of their backgrounds. http://www.goldenstateofmind.com/2010/1/4/1232730/jeremy-lin-the-new-steve-nash The author isn't saying Lin will have the same pro success as Nash, but rather that both produced in HS and in college but were/are overlooked because of their backgrounds (Lin for his Asian American heritage, Nash for his White Canadian background).
Possibility wrote on Tue, 01/05/2010 - 8:41pm
I think the comparison between Nash and Lin is a little pre-mature at this moment. Im just not sold on the Ivy League and the level of competition they play. However, Lin does have talent; I will not be sold on Lin until March Madness. Thats if Harvard makes it and Lin maintains the same level of play against legitimate teams vice the scrubbish teams Harvard play weekly. This will determine if he goes to the NBA or not.
TKim wrote on Thu, 01/07/2010 - 4:05pm
To "Possibility", that's a fair point. Playing in the Ivy League makes most fans dismiss Lin superficially. However, the NCAA just released its 30 candidates this year for the annual John Wooden award, given to the best NCAA Division-I Basketball player. Past winners include Larry Bird, Michael Jordan, Tim Duncan, etc. The current year's list is full of players from powerhouses like Kansas, Duke, and North Carolina. However, lo and behold, there is one Ivy League player listed, none other than Mr. Jeremy Lin. http://www.infozine.com/news/stories/op/storiesView/sid/39353/ http://www.ivyleaguesports.com/article.asp?intID=7518
Possibility wrote on Fri, 01/15/2010 - 11:41pm
Doesn't matter, what award he gets, if Harvard makes it to March madness and I think they will. This is the center stage, this is were legends are born. Everbody loves a giant killler and This is were Mr Lin can really get noticed, or embarrased. No one is gonna respect him until then. Harvard schedule is one of the weakest in the NCAA
Best Man Weddi... wrote on Mon, 02/08/2010 - 6:12am
Kobe is the bomb. Lakers going back to back after he dominates the All Star Game this weekend!
TKim wrote on Sat, 01/02/2010 - 8:38am
From 2008-09, against Colorado, GW, UConn, Rice (2x) and BC (2x) (teams that have produced "NBA level talent"), Lin is averaging 19.6 points, 5.1 rebounds, 4.6 assists, 3 steals, and 0.7 blocks. Of course, 7 games does not a career make, but he steps it up when his competition does, when his team needs him the most. You could put those numbers up against any DI elite player. Against arguably his toughest opponents (BC, UConn, BC), Lin is averaging 27.3 points, 5 rebs, 5 assts, 3 stls, and 1.3 blocks. A limited sample size, definitely--but people can't say he's putting up the numbers he does just because he's playing against inferior competition. Yes, he needs to get more exposure on a national stage. But honestly, he doesn't need to prove anything in terms of showing he can compete against the cream of the crop.