Breathin': An Evening of Inspiration with Eddy Zheng

Join this night of spoken word, music and inspiration with Eddy Zheng, a community activist who spent 21 years behind bars and is now under threat of deportation. Eddy works for the San Francisco Community Youth Center, was the recipient of the Chinese World Journal Community Hero Award, and is the editor of Other: An Asian and Pacific Islander Prisoners' Anthology. With opening poetry and music sets by Paul Dosh and Martin Dosh.

Come party with Hyphen to celebrate their latest Trailblazing issue and the folks that grace its pages. With live performances by Jack Tung, The Gold Medalists, Jelani Lateef & DJ Shawn Dub, and Power Struggle. Tunes spun all night long from DJs Citizen 10, Malicious Lee and DJL! Live art also goin' down by Lawrence Yang. Not to miss!

Good Imports and Thank You for Commenting Exhibits

This solo exhibition of artist Imin Yeh consists of two large-scale projects. Good Imports is a collection of discarded objects made in China that have been wrapped in fabric typically covering boxes with "good" imports such as teapots, medicine balls, and stone seal sets. Thank You for Commenting is a series of hand-drawn posters, with text plucked from online comments in response to sensationalized current events. Exhibits run through February 26th.

A scene from Lagaan, one of the films covered in the workshop

Cinewoman on Screen -- Call for Films

New York Women in Film and Television (NYWIFT) is seeking films made by Asian Pacific American women, in honor of Asian Pacific American Heritage Month in May. Films will be shown at the Anthology Film Archives on May 26th as part of the "Cinewoman on Screen" series. If interested, contact alison(at)homunculusprods(dot)com with film title, length, available format, website (if available), synopsis, and filmmaker bio. 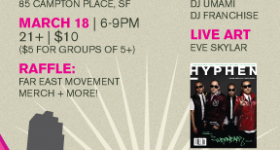 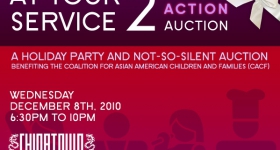