Recently, I was asked by Hyphen to write about a small project I started a little while back: the API/A Love Letter Project. For me, as easy as it would seem to just talk about what my endeavor entails, it is extremely difficult to articulate the Project’s importance and the emotion behind it which pulsates it forward.

For the most part, the API/A Love Project is an accumulation of various ideals and dreams I had while going forth with my Masters in Asian/American Studies. It is a lot of personal chapters of my life and other people’s lives wrapped up in a collection of narratives, autobiographic short essays, clever uses of media, as well as digital and worn photographs attached to personal wording.

Mainly, the reason why I created the Project was because I was constantly surrounded by people within the community and academia who were so mad and disillusioned about the past. They were so wrapped up in the horrendous things that had happened that they could not or would not look to all the possibilities that were in store for our communities in the future. Most of my colleagues and professors told me that it was good to be angry and that anger would be your best “weapon” in trying to re-build and critique the various things in Asian/American politics. Despite being a pretty optimistic guy -- even unnaturally idealistic -- I started becoming just as angry and just as critical of the world, sometimes for no reason. I became so wrapped up in being just as angry as people I admired that I would begin losing my own voice in my work -- I and it became cynical. But I’m not that guy.

I went into Asian/American Studies and worked with the community because I saw something that could be changed. I went into Asian/American Studies and actively worked with Thai and Asian/American groups because I wanted our stories to be told -- and on a more intimate level, I wanted my parents’ and other immigrants’ sacrifices to not be made in vain. Everything I did before and up to the project was a love letter to my parents, their friends, and our community. Everything I will be doing will gleam with similar personal sentiments as before.

I’ve seen some pretty disheartening and fucked up things in my short lifetime, but they do not define the people we are or the people we are meant to become. In my time and during my “reign” as the current Mr. Hyphen, I’ve seen friends suffer and lose their battle to cancer (Project Michelle), while younger individuals began and won their own struggle with leukemia (Janet Liang of Helping Janet**). I worked on a local campaign -- Save the Thai Temple -- to preserve the religious freedom of the Berkeley Thai Temple when neighbors on an adjacent street in Berkeley said its religious practices were “a chronic nuisance,” deeming our culture as disruptive to their daily lives. More or less, we -- as a marginal community -- were deemed as perpetual aliens in our own backyard, just as our Asian/American brothers and sisters were labeled when first disembarking upon the shores of the US. I’ve seen a lot of trying things in my small life, but I have also seen and realized many great things.

I came to understand that as rampant as discrimination and tragedy may be, they are only a part of a bigger picture. These sometimes racist, sometimes bodily, or sometimes uncontrollable forces that affect us do not define us. What defines us is what we do with the time we have here. What defines us as individuals and us as communities are the beautiful and numerous things we do to rebuild the past and its blunders. “We don’t have to lose,” is what my good friend Colin Ehara once said to me upon my winning Mr. Hyphen, and I believe him with my whole heart.

And so back to my small Project: The API/A Love Letter Project is a venue for anyone from any community to write or show their aspirations and affections for the future of our people. The Project is meant to showcase that there is more beyond being critical, being angry, and being hunted and haunted by our pasts as well as by those who once defined who we were as people of color. My Project is a way for everyone and anyone to allow themselves the space to get lost in the beauty of the amazing things we can and will do; proving to the outside that the world is not as half as bad as it may seem.

And so I would hope that API/A Love Letter Project represents a multitude of different things to and for many different people. Additionally, by reading the letters already written, I look forward to seeing others and you -- you who are reading this blog as we speak -- reach out and write the stories which have brought you here. But mainly, I hope that the love letters written will remind everyone that we don’t have to lose, and that what was once perceived to be forgotten and misplaced truly isn’t at all.

**I represented two organizations during the 2009 Mr. Hyphen competition: The Thai/American Scholarship Fund and Helping Janet [Liang] by way of the Asian/American Donor Program. The Fund served as a platform to help subsidize tuition costs of both Thai and Southeast Asian/American youth, while Helping Janet was a community forum to raise awareness of a young woman suffering from acute lymphoblastic leukemia (bi-phenotypic). Over the course of a year, I came to respect and admire Janet for her courage and strength -- always determined to undergo new types of chemotherapy as well as continuously advocating for Asian/Americans to register as donors in the National Bone Marrow registry. It was on May 26, 2010 at 8:33 AM that I received a text from Janet saying, “You cared so much i [sic] felt you ought to know. Im [sic] officially cancer free. Literally. More details if you ever want to know more but its [sic] gone. Mr. Leuk.” 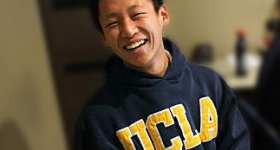