Brenda Lowe, still smiling because she doesn't realize her days are numbered on Survivor

Blog Editors' Note: We definitely lucked out when searching for Hyphen's first TV blog columnist. Our managing editor praised Dianne Choie, formerly of AsianWeek, for her witty take on reality television, prompting us to woo the Brooklyn-based writer to keep our readers informed of Asian Americans gracing the small screen. She kicks off her column with a refresher on TV Asian-spotting and gives us a glimpse of what's to come.

Hi, Hyphen blog fans! I'm your new guide/conversation-mate on all things Asian American on television. I thought we might get to know one another by sharing what shows and Asian American characters/contestants we've been watching -- any overlaps on our lists? Anything I'm not watching that I need to check out? Let me know in the comments.

Project Runway: First off, you should know that I'm a pretty huge fan of competition reality shows ("reality" reality shows like Real Housewives and whatever Tori Spelling's up to are less my bag, but I'm happy to give anything worthwhile a shot). The last, horribly disappointing season of Runway wrapped up a few weeks ago, but Andy South was a fascinatingly out-there finalist, and Ivy Higa was one of the love-to-hate-iest villains the show's had in years. I'm eagerly anticipating next season, but in the meantime I'm still catching up on The Fashion Show. Calvin Tran seems quite the...character. Glee: I hate and love this incredibly uneven show in equal parts, but the fact that two of the hit show's secondary (I might have called them tertiary last season, but Mike Chang in particular has really stepped up the screen time this year) characters are Asian American brings me back to my pride-filled days of Jin and Sun-centric episodes of Lost. Throw Principal Figgins into the mix -- though, has he really been fired?! -- and my musical-loving heart swells with... well, glee. Though what was with that utterly unnecessary Mr. Schue/Mike Chang "Make 'Em Laugh" dream sequence last week? Yes, Harry Shum Jr. is a terrific dancer, and it's great to see him flex his comedy/abdominal muscles again after finally singing ("singing") with Tina/Jenna Ushkowitz on "Sing!" in the "Duets" episode, but the men's performance wasn't quite wacky enough to be a tripped-out hallucination, and the less Mr. Schue dancing we see, the better. Honestly, am I the only one creeped out when he busts a move with the kids?

Survivor: I fell right into CBS's trap when I started watching this show in its 13th season, aka the racial tribe season. Bracing myself for embarrassing stereotypes and cheesy Boy Scout fire-making, I was proven wrong when it turned out that the show I'd somehow avoided for the better part of a decade actually had some fascinating insight on human behavior, surprisingly creative challenges (several of which actually look pretty fun -- though in my case I'm talking about the puzzle-type tasks and not the stand-on-one-foot-at-the-top-of-a-long-skinny-pole fare, which I would fail at immediately), and scheming on so many different and constant levels that I found myself literally holding my breath during tribal councils, wondering if the latest blindside was successful. That said, I'm the first to admit that the ugly stereotypes did and still do rear their ugly heads often enough on the show to be noticeable. This season I had my money on Brenda Lowe, who disappointed me when she didn't use her well-established wits to avoid getting voted off last week. You coasted on power for too long, Brenda!

America's Next Top Model: Still can't resist it after all these years. The show has had several Asian American and mixed race contestants over 15 cycles, and they've traveled to Japan, Thailand, and China for season finales in the past, resulting in some hilariously terrible language barriers and culture clashes (who could ever forget Yaya and the umeboshi in season three?). The show is obviously largely Tyra Banks-approved fluff, but there is the occasional fleeting moment of racial/cultural discussion hidden deep down, I swear. Also: tears. SO, so many model-wannabe tears.

The Walking Dead: This one's (clearly) a bit out of left field for me, but after hearing rave after rave about this post-apocalyptic show, I swallowed my zombie fatigue and checked it out. Definitely glad I did -- the sophisticated writing and directing make the now-tired subject of the undead feel fresh, and I was surprised to see Glenn (Steven Yeun): a savvy, sarcastic character in the vein of Miles Straume (oh Lost, I don't miss you and yet I do) who provides the dark show with a little much-needed levity. Very excited to see where Glenn and the series go from here, though it's agonizing to remember we're already halfway through the six-episode season.

Top Chef (all incarnations): Bravo's definitely got feelers in the APA community, judging by the number of Asian American contestants in every season of Top Chef (not to mention hosts Padma Lakshmi and Kelly Choi) and all its spin-offs. Yes, I've also been known to watch Shear Genius, Top Design, and Work of Art. Bravo, I'm buyin' what you're sellin'. So You Think You Can Dance/America's Best Dance Crew: It's clear that Asian Americans are rising stars in the television dance world, particularly in the latter show. Did anyone else have tears in their eyes when poor Alex Wong had to drop out of So You Think You Can Dance AGAIN because of an injury last season? I'm so looking forward to more dance excitement next year (yes, I am a little, little girl). American Idol: I'm nervous about the multitude of changes the new season will bring, but my fingers are crossed for another impressive Asian American competitor. John Park, you may have been just a blip in Idol voters' consciousness, but you've got a fan right here. Also in Shania Twain. Other shows on my DVR include RuPaul's Drag Race (Team Jujubee, haaaayyyy), the Thursday night NBC lineup sans Outsourced (it's as awful as it looks, right?), Food Party, Louie, Saturday Night Live, Daily Show, Colbert Report, Conan. Whew, that's a lot of TV! What am I missing out on? Who are your favorite/most hated Asian American characters and contestants? Let's hear it. 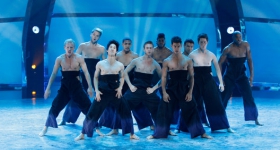 Thanks for the tip! I used to watch the show, but I reached a reality cooking saturation point and let it slide. No one throws around the word "donkey" like Ramsay.

...I could change this to the "Asian Americans on Cooking Shows" column, and I'd have more than enough material to tackle each week. I'll check out next season!

I avoided The Event because the super-aggressive marketing campaign turned me off and I felt so burned by Heroes (GAH) and Lost (guh?). Also because of the number of times I shouted (to no one), "JUST TELL ME WHAT THE STUPID EVENT IS." But as I am a fan of Handsomeness and the phrase "alien double agent," I will give the show a chance. Thanks!

cDonna F wrote on Tue, 11/23/2010 - 9:59am
No need for fan-agony while watching Walking Dead!  AMC announced on Nov. 8 that it has already been renewed for another 13-episode season.  I guess the ratings for the first and second episodes were great:

Since debuting Sun., Oct. 31, The Walking Dead has broken ratings records, with the series reaching more Adults 18 to 49 than any other show in the history of cable television.

I know, such great news! Though not surprising -- the premiere in particular deserved all the accolades and viewers it received. The show feels like a movie in the best way. And Glenn HAS to hold on for as long as they stay around his stompin' ground in Atlanta!

...eep, did I just spoiler myself? Note: I do not have any special info about this (I haven't read the comics) or any of the other shows, so I will never spoil anything about unaired episodes!

Thanks for the hook up (again), Lisa!!