One word sums up Xu Xi’s new novel Habit of a Foreign Sky: sexy. Part family saga, part love story, part corporate suspense thriller, the novel follows the life of 40-something finance executive Gail Szeto as she spirals into panic, loneliness, and confusion after the accidental deaths of her son and mother. As grief forces her to reassess her life, Gail must make decisions surrounding the secret of her birth to a Shanghainese dance hall mother, her rich white American father’s desertion, her unexpectedly huge inheritance, her roguish stepbrother’s attempts at reconciliation, her wildly burgeoning career, and her exotic and mysterious lover. Set against the backdrop of the 1997 Hong Kong handover, Xu’s ninth book combines the intrepid realism of her prose with her cosmopolitan sensibilities. Of Chinese-Indonesian descent, Xu makes her home in Hong Kong, the US, and New Zealand. Xu Xi graciously chatted with Hyphen about her new novel.

Can you talk a bit about the genesis of your novel? What inspired the main character and story?

The book is dedicated partly to my mother who is 98 years old and has Alzheimer’s. She wanted to go to university to be a doctor but couldn’t after the war so she studied to be a pharmacist. She had a little bit of a career but once she got married she gave up the job and raised us … I thought, what would happen if a woman like my mother had been born later, at a more post-feminist time … [I]f I took away all that we would think of as traditional female responsibilities like parenting, being a wife, being the person who does the elder care, what would happen?

You main character Gail finds success in the very male-dominated finance industry. How do you view her as a feminist model?

I remember back in the late 1980’s reading in the Wall Street Journal a study of very successful corporate women. Fifty percent of them were either single or divorced. I remember wondering how much of traditional feminine qualities of being emotionally in touch and so forth do we lose because we have to sometimes behave like boys. … I wanted Gail to be this contradictory and complex kind of character because I think it isn’t that simple to be part of that feminist model. …  I wanted her to confront the emotional in-touchedness that she seems to lack and I think she comes a little closer to that as a result of the loss and trauma she’s forced to face.

Class dynamics feature in your novel prominently, especially in Gail’s relationship with her Filipina maid Conchita. Any particular reason for this?

Hong Kong is very much a class-driven society. Partly it’s our colonial heritage -- the British were class-obsessed. And just the fact that we have such a large population of domestic helpers from the Philippines creates a class situation. … Part of what I was exploring was this sort of forced migration of a whole people. It’s very real for the Filipino community, and it’s such a big part of Hong Kong. And yet in so many ways, people who depend on these Filipino helpers really look down on them … I thought, let’s talk about them and see what comes out.

What do you think are the most pressing issues for Hong Kong right now?

I think for us right now it’s a question of figuring how we are going to fit with China as China rises. There is this push and pull going on here now within Hong Kong about things to do with civil rights, with minimum wage, how there is a growing disparity of rich and poor. … Hong Kong contrasts the world in China where it’s still very communist and very restricted. They don’t have the Internet freedoms, right of assembly freedoms, and some civil rights we have. So it’s a question of how long can we maintain and hold on to this as a separate part of China but also being part of China.

Your book is brazenly frank about Gail’s sexuality and women’s sexuality in general. Why is that?

Gail’s sexuality was an interesting one to try to do because Hong Kong is actually a very prudish society. Women friends here don’t talk as openly about sexual issues as, say, Western women friends … [W]e also have this curious sexual history in Hong Kong, one that doesn’t get talked about openly except in terms of social welfare for sex workers or how to deal with AIDS. There’s a huge amount of adultery, and until about the 1960’s, second wives were actually legal. So in Gail’s case, she’s quite transnational and has a menu of Western sexual behavior to choose from, but she also has this weight of the sexual history of a place like Hong Kong. Additionally, there’s the stereotypical portrayal of women in the West as either sex goddesses or shrinking violets to consider … so I really wanted to explore these dichotomies in exploring Gail’s sexuality.

Your characters are often mixed race and very cosmopolitan, and you yourself have lived and traveled the world extensively. How do you think these qualities affect how self-identity or cultural identity can be conceptualized?

You know, the idea of fitting into a national identity was more important to me when I was younger because I always felt if I didn’t, I would be kind of left out of all these worlds. But the older I get and the more the world changes, the less I feel that. … In Hong Kong, so many people have dual nationality of some kind … There’s a lot more transnational people and biracial people now and it’s mixing up the world. I think that’s a good thing, personally. I don’t think we should be so hung up on one specific ethnicity or one cultural identity. I think that we get to form our own cultural and social identities today.

You currently serve as faculty chair at Vermont College’s MFA Program and are a writer-in-residence at The City University of Hong Kong. What are some of your concerns in these capacities?

In Asia, the university English departments are often linguistics-dominated for a very simple reason -- English is mostly our second language. But what does it mean when some of these second language speakers of English begin to adopt English as their own and transform the language? What does it mean when you are writing in English out of a non-English speaking space? What does that do to literature?

What would you say is your philosophy of writing?  What should aspiring writers aim for or develop most?

Abigail Licad is a books editor at Hyphen. 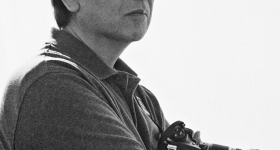 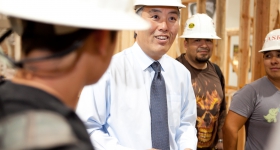