Today's post is installment one of a five-part series. It's autobiographical and, I figure, only right: To ask that you to share your stories here, I should go first.

The series will run every Thursday between now and Jan 6.

Meantime, please do visit the beginnings of the AAMMS Resource Guide and add your two cents: Know Asian American mental health services in your area? Private practitioners you'd recommend? Send your input, please, and make someone's search easier. The comment field at the bottom will take anonymous submissions, or as always, you can email me directly.

No job prospects, no fellowships. Fissures with the new boy, where I’ve put too much pressure, panicked by old demons. Last shoe drops: no part-time teaching next year means not even money for rent. Too much damn failure to cover as perfection.

Grab my stash of goodbye CDs: Macy Gray’s “The Letter,” Etta James’ “At Last.” Add copies for my dissertation advisors to the ones already addressed to friends and family. Put them in a bag with my planner, which has last names and phone numbers, to be left in the front seat of my car. Quick stop by Banana Republic in Emeryville to return an unwanted shirt -- my only, for whatever reason, loose end.

Off the Bay Bridge, I head up Van Ness, to Lombard, in something of a hurry. It’s past three in the afternoon now, and I want daylight. I want to see what I’m doing. Around the bend, and the Golden Gate is a red stretch of girders hung in fog. Can’t find a place to stop on the SF side, so I pay the toll, put the change back in my purse, am first alarmed (relieved?) at the sight of ugly black fences around the first part of the railing, too high and too hard to climb. But they’ve fenced just a brief section, and then there is only the chest-high red rail. I park the car at Vista Point on the Marin shore. The purse goes in the trunk, except for my car key and cell phone, which go in my pocket. I am wearing my pea coat, but it’s still cold, so I pull on my gloves. Short-sleeved black top under, jeans, flats, cute black underwear. Clothes I’d happened to be wearing, but that I don’t mind dying in.

Walking on the bridge, collar of my coat turned up around my neck, passing couples, joggers and vacationers, I wonder if I look like a suicide. Too deliberate? Too somber? Too cold? Walking until I am over water, I wonder if Lawrence or his friends will catch me, a dark dot falling, on his camera trained on the bridge for jumpers. Could be a lucky break, I think, the twist of fate that makes you the documentary cameraman of a friend’s fall.

The pathway that runs alongside the traffic is too straight, I think, and too public: in full view of turning heads that I don’t want to watch me climbing up, dropping out of sight. But ahead, the path curves outward around a supporting wall, and the angle comforts me; I think no one will have a direct or continuous view. Then there is the waiting, as pedestrians and bicyclists come and go. I want it clear. No cries of alarm or dashing Samaritans. No horrified onlookers. There is one break in foot traffic, but I lose it by hesitating and have to wait again. In between, I am only waiting. As if there is nothing to think about until it is time to step over. Even with one foot resting on the bottom edge of the rail, I am curiously blank -- this is not the time for indulging existential crises anymore. The water doesn’t look so far, doesn’t look far enough almost, but waves are mild, boats are few. Why it’s important to hit water and not the rocky shore, I’m not sure, except that maybe water looks like it hurts less. I wonder if other people decide on water for the same reason.

Finally the picture-taking couple has gone, and I step out of the lee of the wall where I have ended up waiting, shifting from foot to foot. Step up to the rail, look at the city bright in the distant light, and decide that beside the steel beam to the left, I can get myself to sit up. Baby steps. Swinging my left leg over is easy, and then the right. Quickly and without effort I am perched on the rail, left arm gripping the beam beside me, right hand on the rail below, feet slightly swinging over water. Nothing between me and water now. Everything between me and the water below. I am coaching myself in my head. Thirty more years of the same? Is that really what you want, Sam? Isn’t it time? And I am not unconvinced. But there is as if a wall, and I can no more break through it with my weak flesh and soft bone than I can slip off this rail into the air.

And then I am being pulled backwards, an arm around my waist, butt first and to my feet. A bald Latino cop demanding over and over what I am doing up there, was I going to jump, am I trying to die. It’s confusing and I say, I was sitting. Looking at the water. He doesn’t believe me but isn’t sure, either, since I am tractable, sweet and apologetic. Behind us traffic has jammed to a stop behind his car, parked haphazardly in the lane beside the pathway. It says Bridge Patrol. They must make frequent rounds. He was fast. Another cop rides up on a bike, and after a quick exchange of questions asks if the first will handcuff me. He glances at me and says no, I don’t seem to be uncooperative. He brings me down to his vehicle, a grip on my left arm, and I keep my face averted from traffic as he opens the door to the back. He takes me to the police trailer on the other side of the bridge, asking me occasional baffled questions through the grate. I say little, except that it was a stupid risk, a thoughtless impulse. Asked if I was thinking of jumping, I say Hypothetically: don’t people wonder when they look at water, what it would be like?

At the trailer a different cop takes over: CHP, sandy-haired with a face that makes you think small-town, not big-city police. He has me empty my pockets, pats me down for knives or other shady objects, demands suspiciously why my car key is on a single ring, separated from my other keys. It’s bad for the ignition, I shrug, to have a lot of weight hanging from the ignition key. For this I win his grudging surprise. But he doesn’t go for my risk story; you were at the first place over water, he says. This is not the behavior of a reasonable person. Looking me in the eye to make sure I understand, he says, apologetic but resolute, “I think you were trying to hurt yourself, and I have to take you to the hospital. I’m putting you under a 5150. This means you can be held for up to 72 hours, until the doctor decides you can be released. If they decide there is reasonable cause, they can hold you longer.” At this I break into pleas and protest, visions of madhouses loose in my head, but he says, “I’m sorry, I’m going to have to handcuff you.”

I try to hide my hands. Black-haired parents with little children wide-eyed as I am led to the car, cuffed behind my back. At least he is kind and asks another cop to give us a ride to his own vehicle, which is parked a distance away, agonizing had I had to walk.

In his car he seats me in front and continues to ask me questions. I can tell him the truth, he says, because he’s taking me in for sure and just wants to know if his instincts were right. Tight-lipped and resentful, I don’t give him much more to work with. After a silence he makes general conversation, and to this I respond amicably, working in the meantime on: one, my handcuffs which, I’m mildly amused to find, are no ­harder to remove than the jade bracelets my parents got for my sister and me as children; and two, my story. Something that will get me out tonight. Evidently, saying little to nothing will not fly.

Ask a Model Minority Suicide is
a series on mental health. Introductory post
here.
Resource Guide here. Next installment of this story here. Go here
to see all posts in this series. 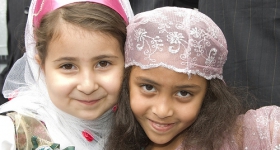 Maggie wrote on Mon, 01/24/2011 - 9:54pm
I'm so surprised that not more people have commented - this is a really well-written series of articles on what happens after a suicide attempt. I just wanted to let you know that you did a really good job and I hope that you'll continue to write more about your experiences. One thing that really bothered me that was not really resolved by Part 5 - did you ever report the African doctor? It's so scary and disgraceful that some people would take such advantage of their position. I really hope he gets his just comeuppance.
Ask a Model Min... wrote on Mon, 01/24/2011 - 10:33pm

Hi, Maggie. That's an important question and I'm ashamed to admit, I didn't. I meant to -- told myself I would when I walked out of that room, and when I left the ward. But trying to solve the puzzle of How to Want to Live, over the next year really... I told myself I'd deal with the very public reporting and accusing and testifying process Later. When I felt stronger. But in some way, I guess, I never did feel up for that.

If he has tried his hand -- and succeeded -- on anyone else since I left (and why not, right? I'm sure he banks on the fact that we are in such vulnerable, shameful positions when he preys on us that we're more likely to self-destruct than to play avenging angel), then sadly it is partly my fault.