Hey everyone: there's nothing in particular that we want to discuss this week, so we leave it up to you: what's going on in Asian America this week? What's gotten up your nose? What are you excited about? Any leftover comments from previous arguments? Today's thread is truly open, topic-wise.

Keep in mind though: the thread is moderated, so no cursing, insults, personal attacks, grandstanding, or excessive passion. Talk to each other, please, not to the air. 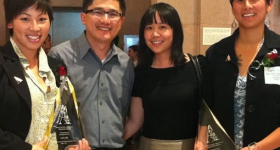 I gotta say, the blurbs that show up in my RSS reader are great at prompting me to click-through.  And, if you've come to this page directly, you won't see the subject that I've copied/pasted above.

Still, I gotta comment - because...ok - so let's say the media is spinning the event in question.  Maybe the media suggests because some recent domestic acts have been carried out by East Asian American / Middle Eastern American - or in simplistic terms, Muslim American men - that all Muslim American men are therefore suspect.  Did they make a similar leap of judgment regarding the Hutaree?  No.

Just a harmless prank perhaps?  Just one of those "boys will be boys" or "extremists will be extremists"?  Something that diminishes in importance because of the amateurish nature of its execution?

I could maybe buy this line of reasoning in the case of a guy trying to explode his shoe.  Or a guy trying to set off a bomb in his underwear.  And yeah, some nitwit who thinks he can somehow get his hands on an improvised, radioactive "dirty bomb".

But come on - how good of a bomb does it have to be before it makes it to the level of "unacceptable"?  A failed car bomb is better than an exploding backpack?

Come on.  This "(non)bombing" was no non-event.  Let's not wait for a tragedy before we declare something wrong.  Otherwise, you might as well do away with the concept of criminalizing attempts, or negligent behavior. What, do you get as many chances as you want to kill someone?  Only penalize the successful attempt?