In Jean Kwok’s debut novel Girl in Translation , 11-year-old Kimberly Chang moves from Hong Kong to Brooklyn with her mother in search of a better life. However, she quickly faces hardships that too-often characterize the immigrant experience: alienation, exploitation, harsh living conditions, and the realization that the American Dream is more elusive than once thought.  Most poignant about the novel is that it is drawn from Kwok’s own life experience. Like Kimberly, Kwon harnessed her academic talents to rise above the sweatshop where she and her family worked while she was attending school. She received a scholarship to attend Hunter College High School, and later studied at Harvard and Columbia’s MFA program. Kwok talks to Hyphen about her novel and experiences:

What drew you to write a coming-of-age story about an immigrant girl?

How did you begin writing?

I started writing when I was 7. My brother worked at a sweatshop, then waited [tables] after the sweatshop closed late. I remember one day I heard him come in really late, and he laid this book on my pillow – a diary he had bought for me. There was a little lock on it and he said ‘Whatever you write in this diary, that belongs to you,’ and that was the beginning of my being a writer. When I look back I’m amazed that he was able to save for a gift, and that he bought me a diary instead of a toy or a Barbie doll.

How did your family react to your decision to become a writer?

Writing was not really seen as a profession in my family, and I thought I would go into math and science. The thing is that I have a talent for school but I am extremely not talented as a Chinese daughter! I was this dreamy child that they just didn’t know what to do with. I didn’t know how to do any of the things that Chinese girls are supposed to be able to do like make dumplings, and cook and boil, and iron and vacuum.  I was a disaster, really monumentally, at all of those things. I think my family was so relieved when I got into Harvard because it meant that I would get a job, and the changeover from physics to writing didn’t faze them because they were like, ‘Well, she’s still at Harvard, she’ll still get a job, we don’t have to find a husband for her,’ which would have been an impossible thing to do!

What does “translation” mean as it’s used in the title?  Is there anything that is often culturally lost or misinterpreted when one immigrates to America?

Everything! Everything is lost, everything gets adapted, and I think when you’re a young immigrant you can see it from all sides. I was able to see it from my parents’ side, from my side, and from the Western side, so you’re constantly translating yourself back and forth. What was important for me in writing the novel was that I wanted people to undergo the immigrant experience instead of just reading about it.  That’s why the language in the book was designed the way it is.  When Kimberly can’t understand English or when she can’t understand something culturally, we’re just as confused as well. The reaction that’s gone into that is great because people say ‘I’m really in the head and heart of an immigrant and I never knew how hard it was or how frustrating it was’ and how you could have a very rich internal life and be very smart and articulate in your own language but not in English and then you come across as really ignorant even though you may not be at all.

It’s interesting how there is much humor in the novel, especially in scenes describing Kimberly’s first impressions of American life and encounters with Americans. Is this any prescription on how differences should be viewed?

I do hope that people do get along better, I think that it’s very hard to understand what it’s like from someone else’s position and it was really my hope in writing this book that we could really be more compassionate toward each other. Like how you go on the subway or on the bus and you see this foreign-looking woman and she looks weird and she can hardly speak English and she’s carrying these bags that smell funny, it’s very easy just to distance yourself from her an say ‘Oh she’s so Other,’ but I’ve been that woman and I know what it’s like to be that person so I do hope that people after reading the book could see something like that and think, ‘Well, that could be Kimberly Chang’s mother.’

What’s next?  Do you have any new projects in the works?

I do have a next book already fully planned and partially written and it is set both in Chinatown and in the professional ballroom dance world. 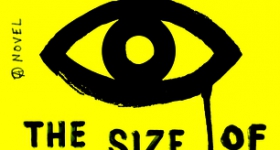