Radio Saigon Houston co-founder and journalist Thuy Vu recently returned from a five-day humanitarian mission to Haiti, where residents are still recovering from the earthquake eight months ago that has left the country’s capital Port au Prince in ruins and crippled the rest of the island-nation. Vu traveled to Haiti from August 18-23, with a group of 35 volunteers, including doctors and nurses to provide much needed primary care services. While there, she used her cell phone to broadcast live three times a day, offering dispatches of daily life in Haiti to Vietnamese American listeners in Houston. Leading up to the trip, the community had donated $35,000 for the mission. Vu spoke with New America Media editor Ngoc Nguyen about life in Haiti after the quake.

How did you decide to travel to Haiti on a humanitarian mission?

We heard from a friend -- a doctor and a Catholic priest in Houston. He said he would be joining a group of medical doctors on a mission in Haiti. As soon as we heard, we decided we had to go along to report on the effort. There aren’t that many Vietnamese who are involved with these missions, so it was a good opportunity

Once we decided to do it, we talked about it on the air, every week, we just let people call in and talk about the situation in Haiti. And we shared what we would be doing on the medical mission. Right away, support from the Vietnamese community poured in. In one week we got 14 volunteers -- a few were medical volunteers, a few nurses and medical assistants. All are needed, because they need lots of volunteers to do screenings, getting people to fill out forms. There are so many people and only a few doctors.

On the air, I talked about what we needed for the trip -- medicine and supplies -- and we got so much. I realized that compassion is so contagious. The Vietnamese community is kind of tired of political conflict in our community when it comes to charity work, so that when you have something that nobody objects to, everybody likes to be a part of it.

The plight of the Haitians struck a nerve with the Vietnamese American community -- they could also relate having been refugees themselves, right?

It struck them from the beginning. There have been a lot of disasters in the past, but with the tsunami in Indonesia and Thailand, somehow the government could do something and they recovered pretty quickly. In Haiti, six months after the earthquake, everything stayed the same. You still have 1.6 million people still living in tents after six months.

We reported to our station live three times a day -- morning, noon and evening. It sent such a chill to all the community, especially as we have been through all the disasters of wartime - dislocation, refugee camps, and refugees on the high seas, all the terrible things we have been through. But even then, we all knew it was temporary, somehow, sometime it will end for a better future. The situation in Haiti, I don’t see an end to it. I don’t see any hope for that.

Eight months after the earthquake, what are some of the realities of daily life in Haiti now?

It was like a war zone. People are living in tents. You see 150 people in line at a faucet for water each day, waiting in line for hours just to get fresh water for drinking or food. Don’t even talk about getting water for bathing. The roads are very dirty and there’s lots of earthquake damage. There’s trash everywhere, there’s no effort at all to take out the trash. There’s no infrastructure at all.

Was it easy to provide medical care?

We heard there would be about 2,000 patients to help. Within three days, we got more than 4,000 people. In Port au Prince, there are many organizations helping the people. We went further [outside of the capital]. We went to a city about 100 miles away, it took us 10 hours…the roads are still damaged from the earthquake, the bridge over the river is still bad, you have to wait for the water to go down, so we could go over the river.

When people heard that we were going to provide medical care, they started walking from the mountains at 2 or 3 in the morning. It took them five hours to walk to our clinic…in a small convent in the Chantal village. The clinic has about two to three rooms. Of course there’s no air conditioning, and we only get electricity a few hours in the morning and afternoon.

The earthquake to the capital affected the whole country. With no central government, the local cities are also frozen. There’s no transportation outside of Port au Prince, (and) people (are) still using a donkey for transportation.

What is the security situation?

The United Nations sent guards to help us, because they were fearful for our safety. But, in order to help us, they were kind of hard on the locals. They maintained order by pushing and shoving people. It broke our hearts to see people…the weakest…the elderly get pushed. We finally asked [the UN] to leave us alone. On the second day they decided not to come back, and they told us we better leave the town because some bad elements would be coming, mixing in with people and try to rob us. There have been a lot of trucks or cars carrying medical supplies and foods that got attacked.

So, what did you decide to do?

It was only our second day of our mission. We had a serious mission, so the majority decided to stay, that’s what we came for. We decided we had to have a backup plan. If there was a riot, we would retreat to the second floor of the convent and wait for help. Talking about it now, it’s easy to laugh about it, but that night we were kind of fearful.

To prevent the riot, we decided to put more money into providing the local people with a meal. We asked (the cooks) to cook enough for a thousand people. If you are waiting in line the whole day, hungry and thirsty, that’s why they started shouting. We decided to provide meals and water. Everything went well. The locals cooked brown rice with red beans.

What are some urgent health needs now?

People were being bitten by mosquitoes and ticks and fleas. Right now as I’m talking to you I feel so itchy. I have had medical treatment but it’s not going away. We didn’t expect that. There were 36 of us, only three bathrooms, not enough water, we had to take turns to take baths. The majority of all the patients we had seen, all have skin disease because of the situation.

After your trip, are you hopeful for Haiti’s future?

We don’t see things can get better for them in the near future. It will take a whole lot of changes to help the people. We will use donations from our listeners to build an orphanage so the sisters can take care of 200 orphans from Port au Prince. Life is so horrible for children there, living in tents in 105 degree-heat. The sisters wanted to bring them into their convent, so we donated the money, $25,000 to build an orphanage. The remaining $10,000 will be used to buy medical supplies. Eight hundred thousand children were victims of the earthquake, and tens of thousands of them lost their family members.

Do you feel your efforts made an impact?

I’ve done a lot of humanitarian work in my life, but it’s different when you see you can make a direct difference in someone’s life, like in Haiti. We feel good, when you see without us being there, those 4,000 people couldn’t get medical help. There were children who would be blind if they didn’t get urgent help. A little bit you do can really change their life. I’m so proud of my fellow Vietnamese people. We tend to care more about our own community and ourselves, but now everybody has really gone beyond that. 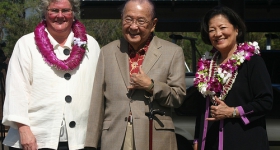 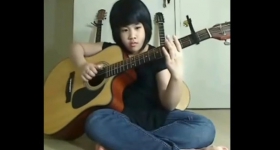 Hyphen Lynks: The Billie Jean Is Not My Tiger Mother Edition