The Oriental Monk who made this all possible is the Maharishi Mahesh Yogi. Those who remember him from the 1960s and '70s remember his long flowing hair, unruly beard, bare feet, wide grin, and brown skin. The dhoti-clad guru and his infectious giggle seemed to reflect the ethos of the hippie generation particularly well (“Enjoy! Enjoy!”). Maharishi’s face graced the pages of Time and Newsweek and his image became iconic for a generation.

American engagement with Asian religions has earlier precedents -- from Hindu and Buddhist influences in the works of Transcendentalists Ralph Waldo Emerson and Walt Whitman to spiritual leanings of Theosophist Annie Besant. Widespread knowledge and acceptance of Asian religious alternatives did not take root, though, until the mid-20th century and especially during the seminal decade of the 1960s.

So how did the American fascination with meditation, yoga, the Dalai Lama, or even Mr. Miyagi and Yoda come about? How does an Asian religion gain entry into the American cultural imagination? Viewing Americans’ fascination with “Eastern spirituality” from this historical vantage point, we might offer the following pointers.

I am being a bit facetious here. However, historical research and current events demonstrate that my observations are not completely off the mark. The newfound spirituality of Russell Brand fits all most of these characteristics. First of all, it is easy. Transcendental Meditation “prescribes two 15- to 20-minute sessions a day of silently repeating a one-to-three syllable mantra, so that practitioners can access a state of what is known as transcendental consciousness.” No sweat.

TM has celebrity endorsements. Aside from our latest religious trendsetting celebrity there’s also Clint Eastwood, Moby, Jerry Seinfeld, Russell Simmons, Howard Stern, and of course TM’s most engaged spokesperson, David Lynch. Lynch, who began meditating in the late 1960s when TM was all the rage, founded the David Lynch Foundation for Consciousness-Based Education and World Peace (DLF), to introduce TM in public schools, prisons, homeless shelters, and among Native Americans and military personnel. He continues the tradition of star-powered spirituality begun by the Maharishi himself. TM officials deny the influence of their famous followers, though. Robert Roth, Vice-President of Lynch’s foundation protests that, “No one is going to meditate twice a day because a Hollywood filmmaker is doing it.” Sure. At any rate, such celebrity networks and the media attention they draw have kept the movement alive.

But Mahesh is strangely absent from Transcendental Meditation’s most recent incarnation. His likeness appears nowhere on the David Lynch Foundation website (a brief reference to the yogi is tucked away in a FAQ). And the official TM website is not much better. Mahesh’s image appears as a small icon at the top of the homepage, indicative of his shrinking significance.

It's Asian religions without Asians.

Now you can say that Transcendental Meditation was never an Indian religion (or a religion at all, as some of its followers would argue). That the Maharishi always had global ambitions or (put more nicely) universal appeal. Or that the contemporary movement seeks to distance itself from a leader whose image is plagued by suspect motives and material concerns.

All these statements are true. However, the bigger picture remains. Western practitioners appropriate what they want and need from Asian religious traditions. While TM proponents might eschew any formal connections to an established faith (most notably Hinduism) and downplay the Vedic roots of its practice, they certainly enjoy the thin veneer of Asian-ness that coats the movement. (A large part of TM’s attraction is the “mantra” -- a term imbued with Eastern mysticism and intrigue.) Asian-ness is invoked at will.

Ultimately, the Oriental Monk or guru is seen as a remnant of a dying (or dead) civilization: the last of his kind. Those in the West (à la David Lynch or Richard Gere) see themselves as the only ones who are able to appreciate the Monk’s ancient wisdom and as the tradition’s appointed heirs. Asians and Asians American certainly are not fit to play a prominent role. Or so the fiction goes.

Asian Americans have tried to challenge this narrative, along with the decoupling of Asian religions from the rich traditions from which they emerge and the vibrant ethnic communities in which they are practiced. Most recently, the Hindu American Foundation (based in Minneapolis) launched its “Take Back Yoga” campaign aimed at reconnecting the meditative practice with its Hindu roots and context. The campaign provoked a strong and often vociferous response. While the HAF’s essentialized re-presentation of yoga may also suffer from a lack of historical nuance, the Indian American organization does rightly point out the erasure of Asians from the larger religious picture.

The truth of the matter is that Asians have carried their religious traditions to the US for well over a century and continue to maintain thriving Hindu, Sikh, Jain, Buddhist, and Muslim communities. But again, this presence is rarely seen or highlighted. Instead, we have to settle for a single acclaimed Oriental Monk at a time, who serves to make the movement legitimate but is eventually made obsolete and fades from the American scene. The Maharishi died in 2008, but he has been reincarnated as David Lynch -- still quirky, yet wholly assimilated for the American scene.

Prof. Jane Iwamura is the author of Virtual Orientalism: Asian Religions and American Popular Culture (Oxford, 2010). She also co-edited the volume Revealing the Sacred in Asian and Pacific America (Routledge, 2003). 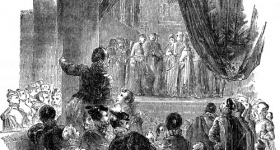 Anonymous wrote on Mon, 03/28/2011 - 9:36am
Transcendent Meditation is not a religion , it is a technique. Thats explains a lot of what the author seems to find so puzzling. Like toothpaste or geology, it doesn't matter who invented it. The "bigger picture" is the benefits to the individual and society. http://www.tm.org/research-on-meditation
Jane Naomi Iwamura wrote on Mon, 03/28/2011 - 1:19pm
If you read the piece carefully, I do mention that TM'ers do not view their movement or practice as religious. However, this does not take away from the way in which their efforts and similar spiritually-imbued ventures capitalize on Asian religions and bodies--specifically their exoticism and "alternative" dimension. It is important to explore the *power* of these representations and the *power dynamic* that underlies their appeal. Such practices are never benign (even if well-meaning and effective); they have vast implications for what and _who_ counts both religiously and racially.