Last week, I posted a recipe for Chicken Tinola to promote my feature story in the Bittersweet Issue on postpartum practices among Asian and Pacific Islander women in the US. Called "Motherhood Rooted," the article explores postpartum traditions practiced by mothers -- whether they have roots in Asia, Latin America or indigenous cultures -- following a period of roughly four to six weeks after giving birth, in which they are homebound and cared for by family members.

Here are some recipes for Korean Seaweed Soup, a staple for moms who have just given birth. It is also known as Miyuk Guk or Birthday Soup, since it is also served on one's birthday. The seaweed helps new moms recover from childbirth, and helps with lactation! It is high in iodine, and really could be eaten by anyone, not just new moms.

The recipes below are submitted by my friend Tina Kim, who has included a traditional beef stock version, a vegetarian version and a quick beef version! The above photo of the traditional, beef-based soup is kindly provided by Tina's mom.

Seaweed soup for postpartum or breastfeeding mothers is traditionally made with beef broth. Usually, large batches of broth are made so the soup can be eaten over several days. The broth can also be used for other kinds of soups. Included below are recipes for beef broth, vegetarian broth and a simple way of making beef seaweed soup recipe without prepared broth.

30 cups of water, or water to fill stock pot

Cover beef bone, oxtail or shank with water, set aside and soak for 30-60 minutes. Throw away water. Add fresh water to cover, and bring to a hard boil. Throw away foamy water.

Fill stock pot with water and prepared beef bone, oxtail or shank and bring to a boil.  Simmer for 2-3 hours.  Set aside and let broth cool down. Skim fat.

Beef bone and bone from oxtail and shank can be used 2-3 times to produce beef broth. If using oxtail or shank, remove meat before boiling for second time.

Rinse dried mushrooms and kelp and place in 8 cups of water.  Soak in water for 2 hours. Add onion and bring to boil. Boil for 10 minutes. Remove mushrooms, kelp, and onion from broth.

2.  Add seaweed and 5-6 cups soup stock; bring to a boil. (If you used oxtail or shank, add the cooked meat to soup.) Boil for about 15 minutes over medium heat.

1.  Cut beef, such as brisket, into small pieces.

3.  Add seaweed that has been soaked, drained and chopped.

NOTE: Seaweed soup for postpartum mothers is supposed to be bland. For more flavor: saute seaweed in 1 tablespoon of sesame oil and 2 teaspoons chopped garlic before adding to soup stock. Add sliced green onions to soup during the last five minutes of boiling. 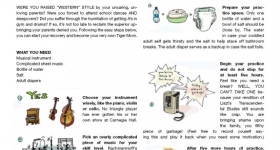 Rocking Rachmaninoff ... or Else

Vivian Mak wrote on Fri, 04/19/2013 - 5:08pm
Hello ~ thanks for sharing this great recipe to give us a peek about Korean's postpartum soup, I heard this is exactly what they (American Korean, or Korean) eat during postpartum period. But postpartum meals in Chinese way is to have a lot more varieties to provide its functional purpose step by step throughout 4 week long postpartum period. For C - section, it may even take up to 5 week long. We use LOTS LOTS of aged ginger, rice wine, and sesame oil to make "pork liver soup", "pork kidney soup", and "sesame oil chicken soup", but these are just common examples out from many different recipes. We also use "tea oil" to substitute sesame oil if woman's body condition is considered "dry and warm". Based on Chinese doctor's prescription, we also add Chinese herbs into herb soups and herb teas. Postpartum meals (diet) care is a pop culture even it has a long history in Chinese culture.