As an undergrad at UCLA, I saw students organize camps and conferences for various local youth. But although there were ones for African Black youth, and Afghan youth, and Muslim youth, there was none for South Asian youth -- none to show that they, too, can make a difference. I made an attempt of sorts myself to organize one my final year, but did not succeed. Fortunately, organizers elsewhere also recognized the need for just such a space, and recently united to organize one in the Bay Area.

The Alliance of South Asians Taking Action (ASATA) is now accepting applications from youth of South Asian descent for Bay Area Solidarity Summer (BASS), taking place in Oakland from July 22 to 26. Over the course of four days, South Asian youth will convene to learn about issues affecting the South Asian American community, train in organizing, and have a chance to connect with each other and other activists. BASS includes political and art workshops on issues from racism, gender, and the model minority myth, to Islamophobia and the South Asian American community post 9/11.

BASS continues the work of similar past camps. "Though in the inaugural year, this is not the first time a camp for South Asian youth has been created. In fact, in 2004 and 2005 the Bay Area hosted Organizing Youth! (OY!), a training camp for Desi youth. Across the nation, various South Asian youth camps like this have popped up over the past fifteen years, from NYC’s Youth Solidarity Summer (YSS) to Washington DC’s DC Desi Summer. Many of the organizers at this year’s BASS have come through one of the many programs." (DC Desi Summer 2011 is also accepting application for July -- learn more at http://dcdesisummer.weebly.com/!)

It's especially important, in today's post 9/11 world, that South Asian American youth in particular are educated about issues affecting their community and trained to address them. Interested youth should sign up at http://www.solidaritysummer.org/. The camp fee is $50 (fee waivers are available), and the age limit was recently expanded to ages 14 through 21. BASS is also looking for volunteers, so if you're in the area and down to do some good, be sure to get in touch. 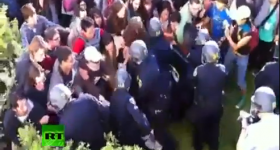