Brian Leung's second novel, Take Me Home, is loosely based on the very real event of a massacre of Chinese coal miners in 1885 in Rock Springs, WY. This was when the Chinese were called "coolies" and thought to be cunning and inscrutable. In the novel, we are introduced to them in this way:

"You can't miss 'em," a woman on the train [told Addie]. "They got eyes like cats and tails that grow out the back of their heads and down the length of their bodies. Front teeth like rats and skin so yellow and oily if you ever got hold of one, he'd slip right through your fingers." It's no wonder Addie Maine, the novel's heroine, thinks she's talking about an animal and not another human being.

At the time she first hears this description of the Chinese, Addie is on her way to join her brother in Wyoming. There's not much left for her in Kentucky -- her mother has run off and her father is dead -- so she figures any place else must be better. She's wrong about Wyoming. It's a bleak, desolate place filled with too many men and not enough women, too much divide between people. It makes Addie wonder whether men can live where trees can't. Even bushes stand out on the plains, isolated from each other. Addie says: "Looks like an army of people standing out there."

Across this vast loneliness, the only person who reaches out to Addie, who tries openly to connect with her, is Wing Lee, one of the Chinese coolies she'd been warned against. They're introduced when the enterprising Addie embarks upon a business selling rabbits and other small game to the Chinese. Wing, with his background in butchering, becomes her sidekick and only friend, and eventually, but only once, her lover.

Take Me Home wants to be a love story. It has all the elements of a good one -- forbidden love, insurmountable obstacles, a relationship doomed to failure -- but it never quite manages to lift itself off the page. Leung is a graceful craftsman -- lovely lyrical moments abound ("[a] track receding behind them as if the train was the tab of an endless zipper . . .") -- but in the end, the characters never seem quite real to me.

As a character, Wing Lee is all Eastern stoicism and Western optimism. Addie's first impression of Wing is "his remarkably placid expression, as if it were impossible for him to be troubled by anything." Wing's placidity keeps him distant, unknowable. On top of that, Wing has a secret he keeps from everyone else: he has taught himself to speak and write perfect English.

This, I have to admit, is the place where the novel stopped breathing for me. No matter how lovely the sentences that followed, I simply did not believe that Wing could have taught himself such flawless English. (We're never told how he managed this.) While Addie says things in the novel like: "He don't speak English. Am I right?" Wing writes whole sentences like: "It was strange because the smell of the salt air seemed to condense and press upon us more than on the open ocean." And "Far off, winking yellow light showed the city rising before us."

I can see why Leung does this. It makes life difficult for a writer if his two main characters don't speak the same language. Think of writing two people miming and grunting at each other for several hundred pages. No question, it's challenging.

However, here, it's also a missed opportunity. Having the characters struggle to understand and make themselves understood, the needed attention to hands and body movements, facial expressions and pointing, the necessary but laughable failures and the moments of success, connection -- this is where the potential love story lies. The struggle is what would have cemented the relationship in the eyes of the reader, given it a real weight. Without it, there's no drama, no danger, not much of a story.

Leung has written an award-winning collection of short stories and is clearly a gifted writer. One hopes he'll open up in his next book and let in more struggle, more mystery, more real life. Make it more deliciously messy. I look forward to it.

Caroline Kim-Brown is a writer living with her young family in Oakland, California. She is the Fiction Editor at Hyphen. 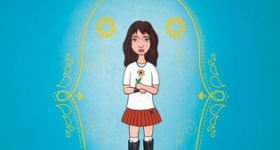 Anonymous wrote on Thu, 01/27/2011 - 12:06am
the concept of "coolie secretly knowing english" isn't original though, either.  steinbeck's east of eden has done it already, and im guessing a lot better. sad face :/ sounds like he ripped off the idea and did it poorly
Anonymous wrote on Mon, 01/31/2011 - 12:08pm
This post is in response to the "steineck" poster. As I've told the reviewer, I quite liked her review and thought she was very careful in reading the book. Obviously we read the book differently, but that's okay. For example, I never had any interest in making the book a love story and purposely avoided it. But to speak directly to the person who commented on Wing's ability to speak english, I can only say that I'm embarassed for you that you have such a low opinion of the Chinese that you think even one with initiative could, over ten years, learn english, and learn it well. As my extensive research taught me, it was not only possible, it happened. And, too, Wing's use of english both written and verbal was carefully constructed to convey that not all of his usage and sentence structures are standard while at the same time not making him sound like Charlie Chan or Hop Sing. I'm also concerned for the commenter for confusing reading a review for actually reading the book. I didn't borrow from Steinbeck any more than he borrowed any of Shakespear's tragedies in the writing of The Grapes of Wrath. Reviews, both positive and negative, are invitations for conversation about a given work, not venues to make unsupportable snipes. It would have been much smarter to simply comment on Steinbeck's strategy and why it worked or didn't work for you. All the best--