Bharati Mukherjee's Miss New India follows the journey of Anjali Bose, a 19-year-old girl from a small town in Bihar, who leaves her family and their expectations behind to seek big-city opportunities in Bangalore, the “Silicon Valley of India.” Energetic, smart, and fluent in English, she is one of thousands of young men and women like her who come from all corners of India to work in call centers, answering customer service calls outsourced from America.

The Bangalore that unfolds through her story reflects the “New India”: a society in which the traditional barriers to social and economic advancement -- caste, hometown, mother tongue, gender, etc. -- are less and less relevant: “So that was the secret of Mumbai's and Bangalore's great success. You work at KFC or Starbucks or Barista, and the person next to you, and your boss, and the people you serve have absolutely no interest in your community or where you came from.” In Bangalore, identities are fluid, evolving. The individuals who populate Anjali's circle in Bangalore reflect the diversity of the city's inhabitants, all possessing complex identities: American expatriates, Indian repatriates, visiting NRIs (“nonresident Indians”), foreign-born Indians, and native-born Indians from all corners of the country. English is their lingua franca.

This multi-layered identity characterizes the city itself; Mukherjee's Bangalore is a complex tangle of New World and Old World, clashing values, and innovation. High rises tower among ruins of crumbling, colonial mansions. Minnie Bagehot, the decrepit mistress of the boarding house where Anjali stays, insists on replicating Raj-era parties, serving champagne and spreading moldy linens, even as squatters camp on her dilapidated property. And Indian investors embrace the opportunities of American outsourcing, even as they debate the prudence of being tied to American prosperity. Anjal,i too, seems conflicted about her own identity –- she alternately goes by Anjali, Angie, and Anjolie -- and at a few points in the novel, she ruminates on it:

I am Indian, she thought. I'm Indian in ways no one else in this house is Indian ... I have no roots anywhere but in India ... Everyone in my life has tried to change me, make me want something alien, and make me ashamed that I might not be good enough. Why should I want to change my name and my accent, why should I plead for a chance to be allowed to take calls from people who've spent too much money or driven their cars into a ditch?

And yet this is about as far as she goes in engaging with matters involving her identity, India, and this moment in history. While conversations about India's past, present, and future take place in the periphery among the minor characters, Anjali's lessons in the big city are about money, fashion, men, alcohol, and sex -- the stuff of Sex and the City.

Anjali is at best an archetype, rather than a fully developed character -- which may not be completely unintentional. She is the Miss New India and, like Rosie the Riveter of another era, Anjali is an icon of her place and time. The novel seems to acknowledge as much when Parvati, Anjali's mentor-cum-mother-figure, makes this murky observation about Anjali: “The best I can come up with is you're like a reflecting pool. You give back wavy clues to what we are or what we're going to be.” 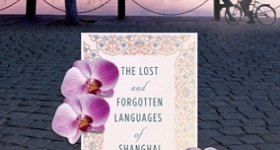