In a sign of the Occupy Wall Street movement’s growing diversity, members of a Chinese workers union joined in protests Wednesday in San Francisco’s financial district.

About 50 members from the Chinese Progressive Association (CPA), which works to support Chinese workers, turned out alongside several hundred others to protest a financial system gone awry in fueling the nation’s growing wealth gap, with continued unemployment and record-high foreclosures.

Chinese protestors declared that they, too, are part of the 99 percent “suffering in America.” CPA Executive Director Alex T. Tom called on the government to take a bigger role in job creation, as well as push for home loan modifications and increased taxes on the wealthy. He added that his group would work to ensure greater Chinese participation in the nationwide movement.

Chinese make up a significant portion of San Francisco’s Asian population, and while the city’s political offices are staffed by a number of ethnic-Chinese -- including several running for mayor in this year’s elections -- until now their presence in the protests sweeping the country has been relatively silent.

Kayan Cheung, who was at the protests Wednesday, said she’s seen an increasing number of elder Chinese lose their life savings since the economy went south in 2008, with little in the way of support.

Cheung, now employed by CPA, says she comes from a working-class immigrant family that used to live in a single room occupancy hotel in Chinatown. Her father, she said, struggled to pay the $400 per month rent on a salary that barely topped $1000.

Cheung points to a recent CPA study titled, “Check, Please! Health and Working Conditions in San Francisco Chinatown Restaurants,” which interviewed over 400 workers in the Chinatown area and found that more than 50 percent of them earn below minimum wage.

Israel Alvaran is a community organizer with Unite Here Local, a Union whose members are 40 percent Chinese. He urged Chinese to join the movement in greater numbers in order to voice grievances that echo the larger population.

Lishuang Lee is a CPA member who immigrated to the United States a decade ago. She has been unemployed for four years now and says she relies on her husband’s meager wages to support her two children.

“I believed in the American Dream,” says Lee, “which meant a decent education for my kids. But with the ongoing budget cuts, which took away our after school program, I had to quit my job in order to raise my kids.”

That was four years ago. After her kids entered middle school, Lee says she went back out to find work, but so far nothing has come up. “There just aren’t any jobs out there,” she says in frustration.

Lee finally enrolled in a free CPA training program for housekeeping jobs, but says employers turned her away because of her lack of experience. “It seems the rich keep getting richer, while us workers continue to struggle.” 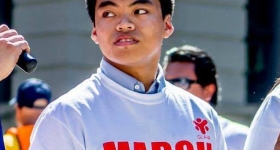 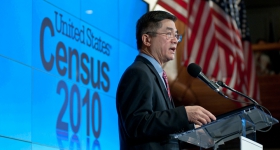 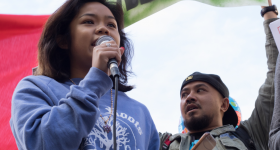