For fans of movies like Robert Rodriguez's Sin City or Quentin Tarantino's Pulp Fiction, The Girl from the Naked Eye is a slick new thriller worth watching. This film from David Ren, Henry Mu, and Jason Yee is a non-family-friendly film-noir homage which neatly incorporates comic book, comedic, and martial arts elements.

The premise is simple: Jake is a loner driver/bodyguard for an escort service who spends an action-packed night investigating the murder of his friend Sandy, all while evading the gang that is trying to silence him. The film execution is fast-paced, very well cut, slick, and entertaining. The martial arts scenes, especially one hallway sequence near the end, are better than those in recent Hollywood releases. The lead Jason Yee, who co-wrote the film, adds depth by playing Jake as a vulnerable, conflicted anti-hero. From his charismatic performance here, Yee positions himself well as a future action star-in-the-making if given the opportunity.

The Girl from the Naked Eye is phenom director David Ren's second feature film, which he had been working on ever since his first film Shanghai Kiss was released back in 2007. The production value of this movie looks nearly as good as studio movies like Kill Bill, which makes the film even more impressive given the small budget behind it. Both of Ren's films showcase his ability to create large production stories even with limited resources. Martial arts icon Ron Yuan also stars and action-directs in this, and there are actor cameos, including Sasha Grey and Dominique Swain. There was a Q&A with executive producer Henry Mu and Jason Yee after the screening I attended, and they shared the financial, filming, and editing struggles that spanned over three years to finally make the film. I found it interesting that the original script was written with Italian American characters and the characters were changed to mostly Asian Americans afterward. The character's ethnicities were never explicitly raised in the film. I felt the film effectively allowed the characters just to be without having to justify their existence on film for any stereotypical reason, even though the movie contained images like martial arts, seedy activities, or Asian gangs.

This is a film that a segment of the population will really enjoy, more specifically the college frat demographic which many American films already court. I'd characterize this as much more of a noir film than an Asian American movie trying to "represent."

The Girl from the Naked Eye will be receiving limited distribution in early 2012, as well as life through DVD/Blu-ray. This quality movie deserves a wider release, just like Ren's first film Shanghai Kiss, which ended up enjoying a broader and longer following through disc format. For more information here is a featurette of the movie, and an interview with the star Jason Yee. 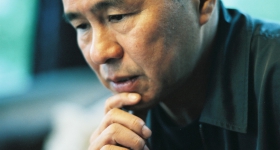 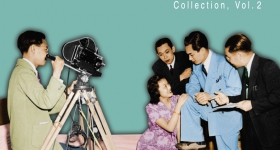