’Tis
the season again: of holiday parties, excessive consumerism… and media hype over
whether elite colleges and universities discriminate against Asian Americans in
their undergraduate admissions process. This annual tradition may have begun in 2006 with Jian Li’s well-publicized lawsuit against Princeton. Li, who was a student at
Yale and later transferred to Harvard, alleged that Princeton exhibited an
anti-Asian admissions bias, in rejecting him despite his high test scores and
GPA.

Almost
a year ago, the media exploded with debates over the Tiger Mom’s memoir on
extreme parenting. Among
Amy Chua’s spurious arguments was the suggestion that her brand of childrearing
helped explain why Asian Americans are highly represented, if not overrepresented,
amongst undergraduates at Ivy League schools and similarly selective
institutions.
Now, in the early winter of
2011, comes the latest hackneyed
news story about
how some mixed-race (hapa) Asian American applicants with non-Asian surnames
are avoiding identification with their Asian heritages as a precaution against
possible anti-Asian bias at top schools.

Over
the last 5 years of this mainstream media-driven discussion, we have learned
two things:

For
the past three months I have been in New Orleans, supporting the youth leaders
and organizers at the Vietnamese
American Young Leaders Association (VAYLA). It’s striking to me that while
social media is blowing up with questions of anti-Asian bias faced by the Asian
American 1%, the debate is rather irrelevant to the community with which I
work. Not one VAYLA youth member or staff member has had a conversation, even
in passing, about the latest anti-Asian admissions policy uproar.

While
so many people wring their hands and beat their war drums to make the Ivies
accept more Asian Americans from the pool of highly qualified applicants, the
youth at VAYLA are fighting for basic educational resources. Like textbooks.

In
my collaborative research study with VAYLA youth leaders, published in the
report Six Public High Schools, Six Years
after the Storm and documented in this video, the Raise Your Hand Campaign (RYHC)
research team found troubling inequalities from their survey of 450 high school
students (nearly 200 were Asian American). Some of the findings include: This
Wednesday, December 14, the RYHC team at VAYLA will be staging a performance
and media event to present their recommendations to the New Orleans Recovery
School District Superintendent. In the holiday-themed production, youth will be
asking Santa Claus for:

The
struggles of Asian American youth in New Orleans are the experiences of the
Asian American 99%. It’s high time we put the concerns of the elite 1% on the
back burner and devote a whole lot more attention to the large proportion of
Asian American youth who struggle to finish high school and strive to be the
first in their families to attend a college -- of any kind.

OiYan Poon is a visiting researcher at the UCLA Asian American Studies Center. She has been conducting an ethnographic study in New Orleans since September, and has been serving as an adult supporter and mentor to the Raise Your Hand Campaign at VAYLA. She earned her PhD in education with a graduate certificate in Asian American studies at UCLA. 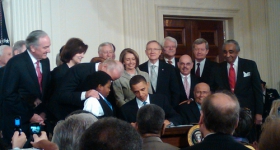 [In California, where Asians constitute 13% of the state population, Asian American students make up 42% of UC Berkeley’s undergraduate student body, constituting the largest racial group on campus. If there is anti-Asian bias at work on any of these campuses, it’s not being applied very competently. ]


Actually, UC percentages of Asian Americans only dramatically spiked after state legislation removed race from admissions and became a more objective egalitarian admissions process. Among non-California schools, studies and books show that Asian
Americans must be significantly more qualified (across multiple
criteria) than others for the same chance of admission, showing that the problem
exists.  So, the data actually disproves your point, and suggests/confirms that qualified Asian Americans are excluded from non-California schools or require higher overall qualifications across multiple categories for the same chance of admission than peers of other racial categories. This isn't a problem only limited in "elite" situations but applies to all Asian Americans in all facets of society beyond admissions, where they must jump through higher bars for the same opportunities or to be included.

I agree, though, that there are many many Asian Americans unfairly grouped together as one homogeneous group and unfairly discriminated against even though they face socioeconomic and societal challenges and underprivileged backgrounds. I agree they should be eligible or have access to multiple forms of assistance that are currently not available to them, and have more attention brought to their challenges.

[Reply] Takagi's 1992 book was published before Prop209 and I'm not sure if the central thesis (admissions traded away racial preferences for class preferences) holds true.