Now that is some drama, Thia.

For Elton John week, Thia sang "Daniel," and in her pre-performance meeting with producer Jimmy Iovine, Jimmy encouraged Thia to get away from the drama of the performance and think about the lyrics to find the connection that the judges have dinged her for lacking in the past. She described how her own brother is her best friend, and how much she missed him when he left home. My hopes were up for real emotion from the young singer, then we cut to Thia staring uncomprehendingly at Jimmy's further advice. Ah well, at least we had a moment when she seemed really into it. Am I crazy or is there something slightly Jesus-y about this photo?

Thia's singing (watch it here) was gorgeous as usual, and though it was still in the same slow ballad territory that she's been stuck in for most of the season, I did enjoy the smoke machine and thought that actual tears might have been close to the surface this time. Or maybe I was just optimistically projecting. The judges had nothing new to say: Jennifer stressed how Thia's voice is "beautiful, very beautiful." Randy mentioned pitch issues and called the song "very safe," and that old gypsy lady Steven said, "When you find the right song, the voice appears." Uh, got it. Thia then mentioned her brother, whose name I swear is something like...Clia? Thia and Clia Megia? If that's right, they have the greatest/cruelest parents ever.

On results night, both Thia and Naima took their eliminations graciously. It was particularly poignant to see Thia's good-bye package, which reminded us of the funky, surprisingly soulful auditioner who literally jumped with joy when she made it to Hollywood. Who knows what decisions were made on Thia's/the show's part to seemingly tamp down on that bubbliness; we can only conjecture about what really happens behind the scenes, and for all of my own tough love for Thia, I truly am sorry to see her go. I'll be picking up your album, girl! Fine, I admit it! I might have teared up a little!

It wasn't all losing this week though: two of our pals made it onto The Soup's Soup Awards. Calvin Tran won "Outstanding Meltdown" (obviously) for his rant about his nuclear explosion runway show idea on The Fashion Show. Calvin himself accepted the golden soup can with a new haircut and a promise to throw the award in the fireplace to create "an explosion, then darkness." He then said so many things that were bleeped out that I couldn't discern what was going on, and ended with the video of his now-classic "Here go hell come." I get the feeling that Calvin is probably recognized more from The Soup than The Fashion Show.

The "Best Dressed" award went to RuPaul (another obvious one), who accepted with Delta Work, Shangela, and Raja in tow after a montage of clips that demonstrated Drag Race's unparalleled ability to create double-entendres. When asked what Raja would do with her Soup award (I guess the title was shared between all four ladies), she responded, "I'm gonna tuck mine away in a place where the sun don't shine." As we expect, honey.

Speaking of Raja, back in her natural environment on RuPaul's Drag Race she was beginning a new era of not keeping her challenge win pride to herself. When the girls were tasked with creating hats out of beach toys, Raja won with her lobster chapeau and didn't let the others hear the end of it. Not sure what purpose that serves besides annoying everyone, Raj, but I do like the lobster cap. For the main challenge, the ladies each had to make three outfits (classic, red carpet, and fantasy), and the "fantasy" look was to be made entirely out of wigs. I adore this sort of crazily limiting, bust-out-the creativity project, and our girls did not disappoint. For her classic look, Manila went with an 80s/Marie Antoinette outfit that Ru rightfully pointed out was a combination of eras, not a single "classic" (Shangela also seemed confused with her flamenco-as-classic outfit; perhaps Ru needs a quick brush-up with the girls on basic appearance descriptions?). Manila's fantasy wig costume was a black and yellow bumblebee outfit. That's some fantasy, lady.

For Raja's fantasy look, she went with a pastel "cotton candy frothy" frock that judge Santino compared to "Japanime art." Guest judge Fantasia loved Raja (she even sang Raja's name). I am really sorry that I don't have photos of the amazing hair outfits. Just watch the episode here. For real, do it.

Quick Dale sighting on the finale of Top Chef All Stars! Like Richard, who wanted him on his own team, I was sad that Dale wasn't a sous chef for either finalist. I am glad that he apparently got a trip to the Bahamas, though. Miss you, Dale! In other Asian American restaurant reality show news, Stephenie and Sudhir are still hanging in there on America's Next Great Restaurant. This week the competitors had to develop a staff uniform and get photos taken of them that would exemplify the theme and tone of their restaurants. Always wanting to emphasize good health, Steph chose to hold a bundle of wheat and get photoshopped into a wheat field, leading Bobby Flay to comment later that she looks like a wheat farmer (a fair assessment). Stephenie also caused me to actually gasp when Flay asked her to turn her shrimp salad into a sandwich to make it more portable, and she refused. "I would prefer not to," she said to his face(!). She explained that people don't eat as they're walking; they take food back to their offices and eat at their desks. As someone who works at an office in midtown Manhattan, I can attest that this is true. It all worked out in the end, as both Stephenie and the judges liked the sandwich that she came up with. Sudhir was adorable when he saw his giant photo blow-up; after commenting on the "Simon Cowell hairy chest," he said he was "rather pleased" with the poster and thought he looked "surprisingly ... handsome!" Love it! The judges weren't quite as taken with it; they thought his grey uniform shirt and sort of shrugging pose weren't inviting. They did, however, like his goan chicken, which was based on his mother's recipe. Unfortunately, we returned to last week's ridiculous discussion of naan as food transport: Steve Ells commented again about how he'd like to see a handheld version of the dish, but Curtis Stone disagreed with him. Curtis explained that the bread is flaky, not like a tortilla, and "you'd bastardize it so much that it doesn't taste good." Hear, hear! Sudhir seems more set on keeping his food traditional than making it an exact Chipotle copy; let's hope he stands his ground! Over in late night, Olivia Munn was on Conan. She was introduced as "the Senior Asian Correspondent on The Daily Show" with no mention of Perfect Couples, which NBC has unsurprisingly canceled. Olivia explained that her father is German/Irish and her mother is Chinese but was born and raised in Vietnam, and then she busted out a bit of Margaret Cho-type Asian mom humor. Since Olivia was a child, her mother told her "You be lawyer, you like to talk" (this and all other mom lines said in an accent, of course). When young Olivia expressed interest in being an actress, her mother replied, "Only one man can do it. Tom Cruise. You no Tom Cruise." "Doesn't she know other actors?" Conan asked. Olivia's response: "Not Asian people!" I've been critical of Olivia Munn's (lack of) comedic ability, but I thought she came off as fun and approachable during the interview. Certainly the Asian mom stuff is nothing we haven't heard before, but I appreciated her bringing the My Mom Is a FOB-type humor to the mainstream (a recent email she received: "I saw your short hair. I do not like at all. Love, mom."). It wasn't all Mama Munn; she also discussed scrotums and Oprah's walk. It makes more sense in context, I swear. Check her out here.

One more for the "been there, done that" file: The Daily Show's John Hodgman did a "You're Welcome" piece on the racist UCLA girl on YouTube, whose ching chong rant has been discussed and mocked heavily (including right here on this very blog). A surprisingly out-of-date issue for Hodgman and Jon Stewart to cover, but there was a slightly different angle covered here: how the Internet records and broadcasts people's idiocy for all to see, in perpetuity. That's not to say that they are completely sympathetic to this particular "victim;" Hodgman pointed out that she's "majoring in old timey Chinese" and is "on a Charlie Chan scholarship." Obviously what this young woman did was incredibly thoughtless, offensive and stupid, but Stewart points out that she's just 18, and he refuses to believe that she is "an irredeemable person." It can be difficult to take this perspective when the things she said were so hateful and ignorant, but it's fair to recognize that young people don't all fully understand the impact and reach of their presence online.

But again, this isn't a pity party. Hodgman's solution: "Own the mistake and then make it worse." He showed the video again with autotune, an SS cap, and a Hitler mustache added. "She no longer looks like an accidental racist ... she now looks like a purposeful, ironic celebu-racist, and for that I'm sure she says, 'You're welcome, ching-chong.'" Check out the segment here. What do you think? 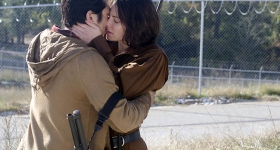 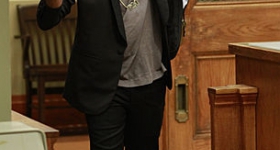