Solitary confinement, harassment, sexual assault and lack of medical care are just a few of the inhumane conditions that immigrants face in detention centers across Arizona, according to a report released Thursday by the Arizona American Civil Liberties Union (ACLU).

“In Their Own Words: Enduring Abuse in Arizona Immigration Detention” highlights problems that still plague Arizona’s detention centers. It comes two years after the Department of Homeland Security (DHS) in 2009, announced a five-year plan to reform the detention system nationwide.

The DHS plan promised to focus on creating a “truly civil” detention program. But on the ground, changes haven’t taken place, said Victoria Lopez, staff attorney with the ACLU of Arizona.

“The reform has stalled at a national level,” she said. “We still have the same number of beds in Arizona and the same terrible conditions in the detention centers that we had two years ago.”

The report examines conditions in five detention facilities, some contracted through the privately owned Corrections Corporation of America (CCA), in the City of Eloy and the town of Florence, all located within a 22-mile area.

The ACLU documented cases of abuse through 115 in-person interviews with detainees in Eloy and Florence, interviews with family members and hundreds of government records. They found more than 500 detainee grievances filed between 2005 and 2009. Alessandra Soler Meetze, executive director of the ACLU of Arizona, said many of the problems that existed then still persist.

The report found problems in several key areas, including denial of grievances; mistreatment of vulnerable populations, such as transgender and gay detainees; and deficient medical and mental health standards.

Tanya, a transgender woman that was in detention was held in a men’s housing unit at the Eloy Detention Center and later in isolated confinement for six weeks, according to the ACLU report, which withheld her surname.

During her stay, she was harassed by detention officers because of her looks and was also sexually assaulted by another detainee, according to the report.

Lesbian, gay, bisexual or transgender (LGBT) immigrants are among the most vulnerable populations in detention. Sometimes they are isolated to protect them from harassment and sexual abuse, but the result is punitive, according to the report.

Transgender individuals are commonly placed in segregated units without access to family visitation or phone calls. They are often shackled while being transported to court or meeting with attorneys, said Lopez.

“There should be some alternative [rather] than placing this person where they would be subject to harassment,” she said.

ACLU documented five instances of abuse, such as sexual assault and harassment. For instance, one attorney reported that one of his clients, who was raped shortly after coming to the United States, was raped again by a fellow detainee and was then placed in solitary confinement. Authorities declined to prosecute the case.

In one instance, Helen, a detainee in the Eloy Detention Center, spent over a month waiting for medical treatment for severe vaginal bleeding. Her bleeding become so severe that she had to be taken to a hospital where she had a hysterectomy.

US Immigration and Customs Enforcement (ICE) responded in a prepared statement to the allegations raised in the report saying that it “is committed to ensuring the security and welfare of all those in our custody, as well as to providing high quality medical and mental health care.”

The statement goes on, “Unfortunately, the American Civil Liberties Union (ACLU) chose to publish unverified allegations without providing ICE an opportunity to respond to or investigate these claims. In fact, the significant acts of abuse alleged in this report have yet to be formally reported to ICE, the Department of Homeland Security’s Office of Inspector General or any other law enforcement agency.”

ACLU’s Meetze responded in an e-mail, “But all of the concerns raised in this report were at some point over the past two years raised directly with ICE officials either through in-person meetings (in Arizona and Washington, DC) and/or by phone or through written correspondence from the ACLU or the detainees themselves.”

She added: “The purpose of the report is to demonstrate that these problems are systemic and that abuses and problems have not improved over the course of the past two years.”

ICE indicated that it would investigate the allegations raised in the report. The agency representative added, “In the meantime, ICE continues to work closely with the ACLU and other community-based organizations to reform the agency’s detention system by prioritizing the health and safety issues, increasing federal oversight and improving the conditions of confinement within the system.”

The ACLU recommends that DHS terminate its contracts with private detention facilities in Arizona posing a threat to immigrants’ safety. The agency also calls for more use of alternatives to detention, and more accountability to ensure humane conditions.

ACLU’s report singles out the Pima County Jail (PCJ) for its “inhumane conditions” and high number of complaints by detainees. The jail is run by Sheriff Paul Babeu, a hardliner on tough immigration enforcement. The sheriff didn’t return request for an interview.

The report states, “While ICE officials and the agency’s detention standards describe immigration detention as nonpunitive, conditions at PCJ can only be described as extreme and abusive.”

Unlike other private detention facilities, PCJ doesn’t have an outdoor recreation area for immigrants where they can be exposed to daylight. The report also found that detainees’ contact with family members is limited through TV monitors and that they experience discrimination by facility personnel.

“Para salir de aqui, rogamos que nos deporten” (“We often pray to be deported, just to get out of here”), one detainee told ACLU.

A major concern is how detainees’ grievances are handled, said Lopez.

“Many of the people I spoke to in detention stated that they felt silenced, that they could not complain,” Lopez said. “They were told that their grievances did not matter or that they’ll be transferred to a harsher jail if they filed a grievance.”

ICE has used PCJ since 2005. It has a capacity of 1,540 beds, of which 625 are used to detain immigrants. PCJ receives about $13 million a year from its contract with ICE.

There have been several hunger strikes in the facility to demand better conditions. One of them in 2009, led to the transfer of several women to other facilities, with the help of ACLU and the Inter-American Commission on Human Rights.

Immigrants constitute 10 percent of the jailed population in Arizona. About 3,000 of them are held in detention centers on any given day in the state -- a 58 percent increase since 2005.

The state’s bulging detainee population stems from the reliance of federal authorities on local law enforcement to identify and detain suspected noncitizens. The policy is funneling more people considered nonviolent or low-risk to detention centers, according to the report.

Arizona has become a breeding ground for legislation like SB 1070, which gives more power to local authorities to detain people based on their immigration status.

DHS typically argues that all detainees are subject to mandatory detention because of past convictions, but that’s not always the case. The majority of the detainees, Lopez said, are going through immigration proceedings, and haven’t been convicted of any offense.

“We are continuing a system that allows noncriminal people to be subjected to prolonged detention and horrible conditions in some of these facilities,” Lopez said.

The report highlights the story of a former undocumented immigrant named Hector (his surname was withheld in the report). The man was detained by the local police for a traffic violation and sent to the Florence Correctional Center after law enforcement found out about his immigration status. While he wasn’t convicted of a criminal offense, he was detained for five months at a private detention center.

Not all detainees previously convicted

Not everyone in detention is an undocumented immigrant either. In some instances, these are individuals who entered the country through a visa or are seeking political asylum. In the meantime, they could spend months to years as they fight in the immigration court system to stay in the United States.

The ACLU report also underscores a larger issue: the choices immigrants make about whether or not to fight their removal from the United States, when they know they’ll be in deplorable detention conditions while awaiting a decision.

“Detention places a huge deterrent for people to exert their rights,” said Lopez. “People may have to make this terrible decision, whether to stay detained and fight for themselves, their family, their community and their lives in this country or say ‘no,’ just because they can’t be in detention one more day.” 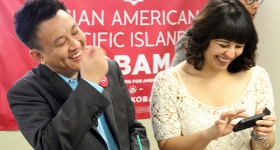 Politics: Targeting the AAPI Vote for the 2012 Presidential Election

LTE wrote on Wed, 06/29/2011 - 6:46am
None of this would be a problem if these people respected both Americans and US law (just like they expect Americans to do when Americans visit their home country). . Many of these people skirted the legal process.
Gregory wrote on Sat, 07/02/2011 - 6:30pm
Pinal, not Pima.